Toxic Substances: Children's levels are higher than their mothers'

Generation Gap
[+]Enlarge
Credit: iStockphoto
Children's PBDE levels — and exposure to dust — tend to be higher than their mothers'. 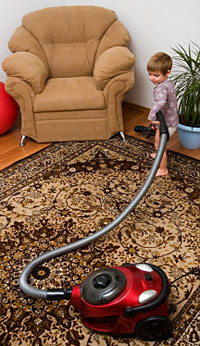 Credit: iStockphoto
Children's PBDE levels — and exposure to dust — tend to be higher than their mothers'.

Confirming a long-held supposition, new research shows that children bear high burdens of polybrominated diphenyl ether (PBDE) flame retardants in their bodies. In the first study to compare children's uptake with that of their mothers, researchers found that children's PBDE levels are around 2.8 times higher (Environ. Sci. Technol., DOI: 10.1021/es1009357).

In the new study, 20 children between 18 months and 4 years and their mothers, living in 11 U.S states, provided blood samples for analysis. Coauthor Sonya Lunder, senior analyst for the nonprofit Environmental Working Group, explains that testing mother-child pairs can control for variability between households, diets, and perhaps even genetics.

Åke Bergman, of Stockholm University's Department of Materials and Environmental Chemistry, led the team that conducted the analyses for both studies, using gas chromatography with mass spectrometry. He is shocked by one of the March study's findings: that some U.S. children's PBDE levels exceed the concentrations documented in adults with high occupational exposure to PBDEs, including recycling workers and carpet installers.

The median PBDE levels of the children in the March study were more than double the concentrations from the new study's children. The March study involved children living in California, which has the nation's strictest fire retardant laws, explains coauthor Deborah Bennett, of the University of California at Davis' Department of Public Health Sciences. Her study also linked higher PBDE levels with lower maternal education, and the new study's participants tended to have more education.

Although recent findings correlated the PBDE levels of men and women living in the same homes (Environ. Sci. Technol., DOI: 10.1021/es100697q), the children in the new study did not have uptake patterns similar to their mothers'. Children's higher exposure to household dust is likely the basis of their higher PBDE levels, Lunder says.

Bennett's study also linked elevated PBDEs with having been fed infant formula rather than breast milk, with consuming pork and poultry, and with recent purchases of upholstered furniture and mattresses. Although U.S. manufacturers discontinued two PBDE formulations in 2004 and will phase out the third by 2013, PBDE researcher Heather Stapleton of Duke University's Nicholas School of the Environment estimates that more than 90% of the U.S. population has PBDE-containing products in their homes.

Linda Birnbaum, director of the National Institute of Environmental Health Sciences, says that both studies are important for confirming that U.S. children have higher exposure and different exposure routes than adults do. "Newer data showing that PBDE replacements also make their way into household raises the question: do we really need these flame retardants in all of the products where they're being used, like nursing pillows?" she says.