HUDDLE
[+]Enlarge
Credit: Rick Mullin/C&EN
Contract chemical firms are vying to team up with customers on cost control in research and manufacturing. 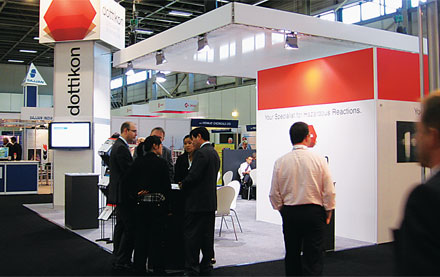 Credit: Rick Mullin/C&EN
Contract chemical firms are vying to team up with customers on cost control in research and manufacturing.

Fine and specialty chemical executives at the Chemspec Europe exhibition in Berlin earlier this month were guardedly optimistic about 2010, following a tough year of recessionary pressure on major markets.

Contract manufacturers of active pharmaceutical ingredients (APIs) and intermediates, some of whom returned to Chemspec for the first time in several years, advanced strategies for offering more comprehensive services to meet changing demands of drugmakers. Agricultural chemical suppliers addressed plans to deal with a continued market slowdown, and specialty chemical firms spoke of renewed growth in sectors hard hit by the economic downturn.

The European companies that dominate the event still face several challenges, according to Tony W. Bastock, group managing director of U.K.-based Contract Chemicals. “Agchem is weak, as customers are still overstocked and working down inventories,” he said, noting that the downturn followed two years of steady growth in agchem markets.

“Pharma is steady,” Bastock said. “It isn’t back to its glory days, nor is it a sunset industry.” He added that the weakening of the euro against the dollar is problematic for firms that tend to sell products in euros but buy raw materials in dollars. “No fine chemicals firm should rely on currency to make money,” he said. “But it helps.”

Contract Chemicals is “still doing well,” Bastock said, even though its 2009 revenues of $40 million were flat compared with 2008. Sales in 2008 grew 15% on a big surge in agriculture-related chemicals, which represent 40% of the company’s business, he said.

Bastock expects agchem to remain weak through next year as companies continue to decrease inventory. In pharmaceuticals, he said Contract Chemicals has done well providing bromination services, dealing with a chemistry that drug companies are glad to outsource given the difficulties involved in handling bromine waste.

Lukas von Hippel, vice president of marketing, sales, and research at Frankfurt-based AllessaChemie, said that weather and inventory issues are hurting Western agchem businesses, but he argued that industrial specialty markets are picking up, buoyed by product innovation in areas such as paper chemicals and antiaging additives for industrial applications.

“Pharma presents a split picture,” he said. “On the one hand, the number of projects is going down. On the other hand, the quality of projects has come up.” He sees drug companies becoming more selective in contracting, looking for suppliers that can add value through services that manage costs. “Fifteen years ago, price per kilogram drove sales,” he said. “Now, in the face of consolidation, logistics of supply chain will become a focus.”

European contract manufacturers are likely to respond by forming partnerships to collectively manage supplies or technologies from a single point of contact. “We have already worked with companies that have large nitration or halogenation capacity,” von Hippel said, noting that AllessaChemie’s strength is in hydrogenation. The company has formal partnerships with other suppliers to pool technologies and services. “The goal is to shorten supply chains,” he said.

Andreas Stolle, head of Saltigo’s pharmaceutical business, acknowledged that the volume of work in pharmaceuticals is declining. “Everyone is hungry,” he said, “but we are still getting Phase III inquiries.” Stolle said drug companies’ primary outsourcing criterion is managing the cost of goods in supply chains. “And that is our strength,” he said, noting that Saltigo is becoming more involved with customers in process improvement and synthetic route development. “The focus is on long-term costs, and customers are willing to share information,” he said. 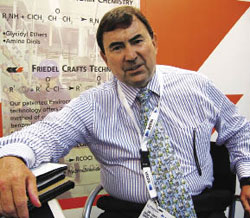 Markus Blocher, chief executive officer of Dottikon, a Swiss contract manufacturer, agreed that developing efficient syntheses will become a more important part of contract work. Dottikon, he said, has invested about $90 million over the past three years to expand its technology tool box, adding low-temperature reactions at multiton scale and new capacity for hazardous reactions. The company, which originally manufactured explosives, has also discontinued production of a range of nitrated aromatics, commodity chemistry that Blocher said no longer fits its strategy.

“The pharmaceutical industry is in the greatest period of restructuring since the consolidation of the early 1990s,” Blocher said. The convergence of patent expiries, lagging innovation, health care reform, and supply-chain risks will force drugmakers to seek efficiency in early-stage development, which will lead to greater collaboration with suppliers in R&D and process design.

“Drug companies are deferring process development to late-stage clinical development—some don’t want to work on the chemical process until late Phase II,” he said, given the risk of early-stage pipeline attrition. “In three years, we will see a huge deficit in process know-how at the same time that companies need materials at large scale with robust chemistry.” It will become the API supplier’s job to anticipate process chemistry needs at preclinical stages, Blocher said.

Dottikon had sales of about $102 million in its most recent fiscal year, a drop of 25% due to the discontinuation of all product lines related to nitrated aromatics. Blocher said sales were also affected by a 7% drop in pharma business. “We have completed the transformation from commodities into more specialized production,” he said.

Other companies at Chemspec emphasized their ability to bundle API production with secondary manufacturing, including final-dosage formulation. Siegfried and DSM, both of which returned to Chemspec for the first time in several years, are among firms with long-standing integrated API and secondary manufacturing. Almac, based in Craigavon, Northern Ireland, also returning after a long hiatus, recently launched a similar bundling of services into a program it calls Rapidd.

“Rapidd offers a full set of services to take a compound in preclinical through to Phase I clinical trials,” said Denis Geffroy, vice president of business development. This includes API synthesis, toxicology batch production, solid-state analysis and polymorph screening, formulation, and radiolabeling. The company offers toxicology screening through a partnership with Covance.

Geffroy said Rapidd is off to a good start, despite a business slowdown in the target market. “When we put it in place, it was really targeted at start-up biotech and small virtual companies that didn’t have a network of service providers and were looking for a one-company point of contact,” he said. Those companies nearly disappeared from the market with the financial meltdown of 2008. “But at the same time, medium and large pharma companies began thinking that this is the way they want to go as well,” Geffroy said.

Single-source contracting has only recently become a topic of discussion with drug companies, he pointed out. “I have been in the API business for 20 years. Until three years ago, we never talked about formulation, tablets, capsules, powder. But it does make sense to look at the whole picture because the polymorphs of different sorts of APIs can have dramatic consequences on formulation.”

Geffroy said Almac’s 12-year effort to move customers’ projects into the clinic has resulted in five compounds in Phase III clinical trials. “Hopefully next year we will have our first commercial API,” he said. The company has invested about $2 million in API capacity increases in Craigavon over the past three years, extending the range of batch runs from 5–10 kg to 50–100 kg. Almac plans to open a $120 million U.S. headquarters and research facility in Lansdale, Pa., later this year.

Investments are also being made in the agchem sector, where suppliers at Chemspec agreed that strength is returning after a tough year. Some companies are expanding. Saltigo, for example, recently secured a $65 million investment from a major customer, Syngenta, to expand capacity for three products made under contract. According to Uwe Brunk, head of agricultural and specialty chemicals at Saltigo, the investment will double capacity for two chemicals and triple it for a third at the company’s plant in Leverkusen, Germany.

DSM’s crop protection business invested $12 million in Linz, the Netherlands, to expand capacity for halogenated compounds, according to Wolfgang Hillisch, the firm’s marketing and sales director. Hillisch said the company’s business tracked the crop protection market, which declined 10% last year and has stabilized in 2010 with a 2–3% increase in sales forecast for next year.

Specialty chemical suppliers also see the beginnings of a rebound in markets that were hard hit by the recession. “Markets are restarting,” said Vincent Touraille, chief operating officer of Paris-based PCAS. The company laid off 20% of its specialties division staff last year in response to a steep drop in nonpharmaceutical sales. “We are recovering well after 2008 and 2009. But customers are being very careful about working capital,” Touraille said. “We are running at good capacity. It is not back to the good years of ’06 and ’07, but we are above budget.” The firm opened a sales office in Asia last year.

Attendance at Chemspec was up by 10% this year with a headcount of about 5,000 by the second day of the event, according to Steve Diprose, vice president of sponsor Quartz Business Media. The number of exhibitors increased by 15% to 425. The group is planning to launch a U.S. Chemspec event next May in Philadelphia.

Chemspec attendees in Berlin also expressed optimism for the year ahead, especially in pharmaceutical markets. “This is going to be the challenge in this industry: Who will best solve customers’ problems involving reliability, process design, engineering, and chemistry?” Dottikon’s Blocher asked. The management of contractor networks may fall to the contractors themselves as customers face the quandary of trying to innovate at lower cost, he said. “I’m confident that in two or three years there will be a huge demand to address these problems. That is what we are preparing for.”

Business
Pharma Chemical Rebound Is Apparent At CPhI Meeting
Business
Navigating The Slump In Fine Chemicals
Business
Custom Chemicals
Share X
To send an e-mail to multiple recipients, separate e-mail addresses with a comma, semicolon, or both.
Title: Shifting To Services
Author: Rick Mullin
Chemical & Engineering News will not share your email address with any other person or company.