The Value Of CO2 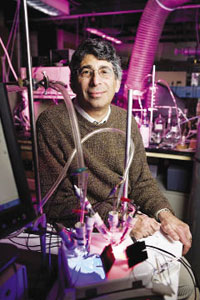 Credit: Brian Wilson/Princeton U.
Bocarsly shows off the photoelectrochemical cells that convert CO2.

Andrew Bocarsly's lab at Princeton University looks like any photoelectrochemistry lab you might stumble into. Crumpled pieces of aluminum foil cloak light-sensitive chemical reactions. Three-necked flasks decorate the benchtops like vases sprouting electrodes instead of flowers. But it's a chemical you can't see that's become a focus for the Bocarsly lab in recent years—carbon dioxide, specifically the CO2 pollution that pours out of cars and power plants each day.

Two years ago, Bocarsly reported that with the help of a pyridinium catalyst he was able to use visible light to transform CO2 into methanol (J. Am. Chem. Soc. 2008, 130, 6342). The process uses a light-driven gallium phosphide semiconductor electrode to reduce carbon dioxide gas that’s bubbled through a pyridinium solution.

Since that time, the research has spun off in two directions: In Bocarsly’s lab at Princeton, there’s been an intensive effort to understand the mechanism behind this process and in a research park five miles north of campus, a small company called Liquid Light is trying to capitalize on it.

Bocarsly, Liquid Light’s founder and chief scientific officer, confesses that he had no plans to start a company based on his chemistry. “I didn’t go to them,” he says of Liquid Light’s financial backers, “because I didn’t think I had anything to sell. They came to me.”

In 2008, Kyle Teamey, Liquid Light’s chief operating officer, was working as an entrepreneur-in-residence with Redpoint Ventures. He read Bocarsly’s Journal of the American Chemical Society communication and thought the technology had promise.

“With any catalytic process there are certain things you look for,” Teamey says. “You look for energy efficiency, the stability of the catalyst, the kinetics. Several factors need to come together for a catalytic process to work efficiently, particularly when you’re looking at commodity markets where products are made at large scale. We were attracted to this technology because it displayed factors that generally indicate it has potential.

“Ultimately what we’d like to do is make CO2 a feedstock for producing fuels and chemicals. That’s the ultimate vision,” Teamey says. For that to happen, Bocarsly’s process needs to compete costwise with traditional methanol production. It’s not enough to be doing something that’s environmentally friendly by removing excess CO2 from the air. Liquid Light needs to compete financially.

One area where the company has had to make modifications is in the photochemical approach to the reaction. While interesting, Bocarsly says, it’s the hard thing to do. “The much easier thing to do would be to build an electrochemical cell that uses standard metal electrodes and then use an alternative energy source, such as solar panels or wind, to power it,” he explains. At the moment, that’s the avenue Liquid Light is taking.

“I think we’ve made a lot of progress,” Teamey says of Liquid Light’s efforts to commercialize the CO2 conversion process, but he adds that the company, which started full-time operations in October 2009, is only just getting on its feet. “We want to make sure we can really prove this thing out before we make any grandiose claims,” he says. “There are too many cleantech start-ups that make grandiose claims and then never deliver. Ten years down the line they’ve chewed up $100 million and never made anything. We’re not those people.”

Back in the Bocarsly lab at Princeton, what may seem like a more esoteric effort has been under way. They’ve been trying to understand the mechanism by which pyridinium takes CO2 to methanol.

“What we learned as we started to do this mechanistic work is that we didn’t have one catalyst—pyridinium—for the conversion of CO2 to methanol. Rather, we had three catalysts,” Bocarsly explains. “It turns out pyridinium is a catalyst in three separate reactions, totally independent of one another.” It converts CO2 into formic acid; it takes formic acid to formaldehyde—a reaction it performs so efficiently the group rarely even observes the acid; and it transforms formaldehyde to methanol. “It’s all free radical chemistry and it’s the cleanest thing in the world,” Bocarsly says.

The fact that pyridinium even does this is something of a surprise, Bocarsly points out. You’ve got to shove six electrons and six protons into CO2 in order to make methanol, he explains. “And everybody, including me, has said that if you’re going to do a multielectron process you can’t do it one electron at a time because the energy is too great. As a result of that, everybody has been looking at reagents that will undergo multiple oxidation-state changes, which means transition metals.”

As it turns out, pyridinium—an inexpensive, one-electron charge-transfer reagent—does the job better than anything anyone has designed, Bocarsly notes. “We convert 96% of the electrons we’re generating into methanol,” he says. “That’s huge.”

“Professor Bocarsly’s recent discovery that the pyridinium cation itself is an electrocatalyst for reducing CO2 to methanol is potentially a paradigm-shifting discovery with respect to our society’s energy problem,” notes University of Richmond electrochemistry professor Raymond N. Dominey.

Dominey points out that in order for solar energy to replace fossil fuels and meet mankind’s long-term energy needs, it must overcome two hurdles: its high cost and its intermittency. “Although much has been made about the former, in my opinion the latter is the real show-stopping problem that prevents solar energy from becoming our dominant source of energy: Electrical energy—specifically photovoltaic output—must be consumed as it is generated.” If you can convert that solar energy into methanol in a truly scalable manner, you can store massive amounts electrical energy, which, he says, “can revolutionize our use of solar energy, making it a viable and realistic replacement for all of our energy needs.”

“In my opinion, the 96% electron efficiency of professor Bocarsly’s CO2 to methanol process means that, if the kinetics are good, this process could turn out to be a silver bullet in terms of our energy problem,” Dominey concludes.

And Bocarsly has something else up his sleeve. Using this photoelectrochemical process, his group can make more than just methanol. “We can make isopropanol in our cell,” he tells C&EN. The trick is this: They don’t use pyridinium as the catalyst. Instead, they use substituted pyridinium.

“This is something we’re very excited about,” Bocarsly says. “When you talk to chemists, they say, ‘Oh, three carbons. We can do something with this.’ ”

Although Bocarsly’s group hasn’t done all the experiments to verify that all three carbons in the isopropanol originate with CO2, he says he’s pretty certain that’s where they’re coming from. His group is currently trying to pin down that mechanism. “We’re very eager to get that mechanism because we want to understand how you make carbon-carbon bonded species from CO2,” he says. “If I can put carbons together to make something with three carbons, and presumably if I understand the mechanism—which I admittedly have very little understanding of at this point—then I can make anything.”

Business
Evonik develops membrane for hydrogen electrolysis
Energy
Quantum dots are superefficient at generating hydrogen
Synthesis
Artificial Photosynthesis Device Paves Way Toward Sustainable Liquid Fuel
Share X
To send an e-mail to multiple recipients, separate e-mail addresses with a comma, semicolon, or both.
Title: The Value Of CO2
Author: Bethany Halford
Chemical & Engineering News will not share your email address with any other person or company.