[+]Enlarge
Credit: TXU Energy
Coal-fired power plants such as this one face tougher SO2 and NOx emissions standards. 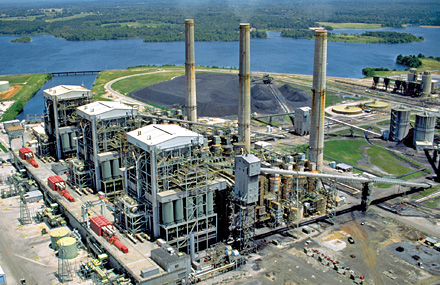 Credit: TXU Energy
Coal-fired power plants such as this one face tougher SO2 and NOx emissions standards.

The Environmental Protection Agency made two key moves under the Clean Air Act this week. First, the agency released a proposal that would reduce power plant emissions that blow across state lines and cause smog and particulate pollution. Second, the agency agreed to review and potentially tighten limits on hazardous air pollution for a number of industrial activities, including pharmaceutical and chemical production.

The emissions proposal would affect coal-, oil-, and natural-gas-fired power plants in 31 eastern states plus the District of Columbia. It would protect public health and help states meet federal clean air standards, says Regina A. McCarthy, assistant administrator of EPA's Office of Air & Radiation. Some states struggle to comply with those standards because of pollution drifting in from other jurisdictions.

Under the proposal, power plants would have to curb their emissions of sulfur dioxide, which causes particulate pollution, and nitrogen oxides, which are precursors to ground-level ozone or smog. Particulates and ozone can trigger asthma, cause heart attacks and strokes, and lead to premature death.

When finalized, the proposal will replace the George W. Bush Administration's 2005 Clean Air Interstate Rule, which cuts SO2 and NOx from power plants in 28 eastern states and the District of Columbia. In 2008, a federal court determined that the 2005 rule had several fatal legal flaws and directed the agency to come up with a replacement (C&EN, July 21, 2008, page 13). In the meantime, the court allowed the 2005 rule to continue as a stopgap measure.

The new proposal would make somewhat larger reductions in pollution than those made by the 2005 rule. It would curb 6.3 million tons of SO2 emissions annually by 2012, an amount that is 1 million tons per year more than that required by the stopgap rule, according to McCarthy. It would also cut 1.4 million tons of NOx per year by 2014, which is 100,000 tons more than the temporary measure would, she says.

It remains unclear whether power plants can achieve the emission standards in the rule while providing affordable and reliable electric power, says Jeffrey R. Holmstead, a utility industry lawyer and partner in the Washington, D.C., office of the law firm Bracewell & Giuliani. EPA will accept public comment on the proposal for 60 days and will then finalize the new rule in light of those comments.

The proposed agreement would settle a lawsuit that environmental firm Earthjustice filed on behalf of the Sierra Club in 2009. The environmental activists went to court because EPA failed to review the hazardous air pollution emission limits for 28 industries eight years after issuing them, which the Clean Air Act requires. The agency set the standards between 1995 and 2000.