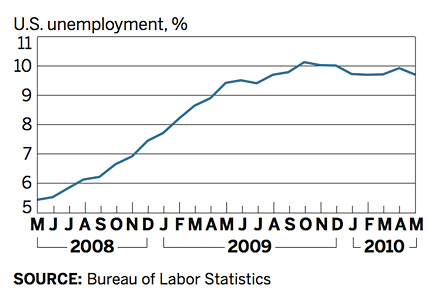 This week’s issue contains data from the 2009 American Chemical Society salary survey, conducted in March 2009 (see page 37). We received the data in late April from the ACS Department of Member Research & Technology, which conducts the survey each year under the guidance of the ACS Committee on Economic & Professional Affairs. C&EN Senior Correspondent David Hanson prepared C&EN’s report on the survey.

The survey doesn’t paint a pretty picture of the employment status of chemists. “Despite holding up fairly well in previous years,” Hanson writes, “chemists in 2009 found that jobs were more difficult to get, and their median salaries were falling pretty much across the board.”

Undoubtedly, the situation for chemists has worsened since the 2009 survey. According to the Bureau of Labor Statistics, the overall unemployment rate for March 2009 was 8.7%. As you can see from the graph on this page, the overall unemployment rate continued to rise in the following months, peaking at 10.1% in October 2009 and hovering between 9.5% and 10% since then. There is no reason to suppose that chemists have fared any better than workers in general during those months. It is fair to conclude that the 2010 ACS salary survey will paint a picture that is even more negative than we are reporting in this issue.

The profession—or at least membership in ACS, which is what the survey actually measures—is also becoming marginally younger. The percentage of chemists under the age of 40 rose to 31.3% in 2009, the first time it has been over 30% in three years, Hanson reports. And the average age of chemists in 2009 was 47 years old, about a year younger than the average age in 2008.

A quite different sort of salary and career survey was released in late June by Nature. More than 10,500 scientists responded to the survey, which was open to respondents from March 22 to April 26. All practicing scientists were eligible to respond, including postdocs but not graduate students.

In terms of contributing to satisfaction, salary matters, of course, but it actually came in second in the Nature survey behind “guidance received from superiors or coworkers.” “Degree of independence” was ranked third as a determinant of overall satisfaction.

We hear it all the time, but I don’t think we take it seriously enough: Mentoring and other collegial social interactions on the job exert a powerful influence on people and go a long way in determining how they feel about their work.