DIGGING OUT
[+]Enlarge
Credit: PTO
Congress is working on legislation that would help PTO, located in Alexandria, Va., reduce its backlog of at least 750,000 patent applications. 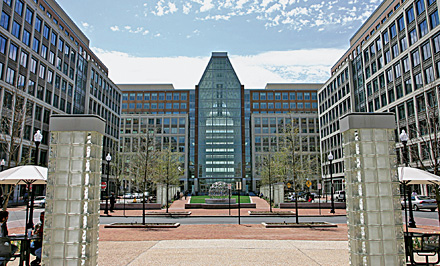 Credit: PTO
Congress is working on legislation that would help PTO, located in Alexandria, Va., reduce its backlog of at least 750,000 patent applications.

Hoping to break a long stalemate over reform of U.S. patent law, a group of lawmakers in the House of Representatives says it’s time to consider less ambitious legislation that would help the U.S. Patent & Trademark Office (PTO) address a massive backlog of unexamined patent applications.

The leaders of the House Judiciary Committee are pushing bipartisan legislation (H.R. 5322) that would transfer authority to set patent application fees from Congress to PTO. The bill would also allow the patent office to impose a temporary 15% increase on all of its fees and bar Congress from diverting PTO revenue to other government programs.

The goal, supporters say, is to give the patent office the resources it needs to modernize operations and speed up the application process.

Currently all of the money that PTO collects from inventors for reviewing their claims goes to the Treasury Department, and the office is funded through the congressional appropriations process. Congress usually sets the PTO budget at the amount the agency expects to collect in fees, plus a cushion of $100 million.

But the office, which is part of the Commerce Department, has often collected more in fees than it gets back in appropriations. For example, from 1992 through 2004, Congress redirected a total of $752 million in PTO income to pay for unrelated federal projects, severely curtailing the agency’s ability to hire enough new examiners to keep up with its growing workload.

As a result, the number of unexamined patent applications has ballooned to well over 750,000, according to the Commerce Department. It now takes the patent office an average of nearly three years to approve or reject an application, and it often takes several years longer.

“Hundreds of thousands of groundbreaking innovations are sitting on the shelf literally waiting to be examined,” PTO Director David J. Kappos told the Biotechnology Industry Organization’s International Convention in May. “This results in jobs not being created, lifesaving drugs not going to the marketplace, companies not being funded, businesses not being formed.”

A study published in January by the British research firm London Economics estimates that the U.S. is losing at least $6.4 billion annually in “forgone innovation”—technologies that cannot obtain licenses and start-ups that cannot secure financing—because of delays caused by the application backlog at the patent office.

Over the past several years, Congress has allowed PTO to retain almost all of its fee revenue. But members of the House and Senate committees that allocate federal funds are expected to revert back to diverting a significant amount of money away from the agency this year because of the current budget crunch.

For fiscal 2010, the patent office initially believed that the recession would reduce fee income, which it projected at $1.9 billion. But the volume of applications unexpectedly increased in the first half of the year due to “an improving economy,” Kappos noted at a House Judiciary Committee hearing in May. “Our most recent estimate is that PTO will collect between $146 million and $232 million more than its appropriated amount in fiscal 2010,” he added.

Diverting this excess PTO income to areas totally unrelated to patents “is completely unacceptable, because as the economy gets better we’re going to have more patent applications,” Rep. James Sensenbrenner (R-Wis.) declared at the hearing. “You need the additional money to be able to cut the backlog.”

Within the scientific community, there is general support for stopping fee diversion. Although the American Chemical Society, which publishes C&EN, has not taken a position on the House bill, it generally supports efforts by Congress to permanently end diversion of patent office fees.

Rep. John Conyers (D-Mich.), chairman of the judiciary panel and chief sponsor of H.R. 5322, stresses that the new legislation isn’t intended to replace a more wide-ranging patent bill that has been languishing in Congress for years.

Congress, he said, needs to act to ensure that PTO has adequate funding. “Without action, PTO fees are likely to be diverted, and we must pass this bill to correct this problem that has been going on for far too long,” the chairman remarked.

On the comprehensive reform front, a Senate bill (S. 515) awaiting floor action would significantly update the U.S. patent statute for the first time since 1952. The Patent Reform Act largely focuses on non-PTO-related issues, such as reducing the growing number of patent lawsuits and limiting the amount of damages that can be collected in infringement cases.

But the proposal also includes fixes that focus on making the patent office more efficient and the legal process more streamlined. In addition, it would give PTO fee-setting authority and bar Congress from siphoning off the income.

S. 515 is backed by the pharmaceutical, biotechnology, and manufacturing industries. But technology giants such as Intel, Google, and Apple oppose the measure, arguing it does not do enough to rein in damages awarded in patent infringement cases. Similar patent reform bills were introduced in 2005 and 2007 but went nowhere.

Rep. Lamar Smith of Texas, the top Republican on the Judiciary Committee and a cosponsor of H.R. 5322, says that a stand-alone fee-setting bill could complement the Senate efforts and that regardless of the talks on a patent overhaul bill, Congress needs to do something to address the huge backlog of patent applications.

“The quick and thorough processing of patent applications is critical to getting new products onto the market and into the hands of consumers,” Smith said in a statement. He notes that close to 500,000 new applications are filed with PTO every year.

At the May committee hearing, Kappos declined to say whether the Obama Administration would support a narrow measure to bolster resources for PTO, insisting that he believes Congress can still pass a broad patent overhaul bill this year.

“I think we should press on and get comprehensive patent reform done that includes all of the changes needed for PTO, including fee-setting authority and all the other important changes that will move the U.S. patent system back to the gold standard,” Kappos testified.

Intellectual property groups support the bid to allow PTO to set its own fees, provided Congress also puts an end to the possibility of fee diversion. “We support H.R. 5322, and we’re very pleased the House committee leadership has introduced it,” says Q. Todd Dickinson, executive director of the American Intellectual Property Law Association, a national bar association of IP practitioners.

“We do believe, however, that this is best done as part of an overall patent reform package, similar to what the Senate is considering,” adds Dickinson, who headed the patent office during the Clinton Administration.