BIG IMPACT
[+]Enlarge
Credit: EPA
EPA’s risk assessment will affect the size and cost of cleanups such as this removal of PCBs from the Housatonic River, in Massachusetts. 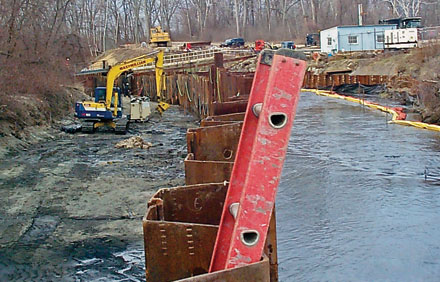 Credit: EPA
EPA’s risk assessment will affect the size and cost of cleanups such as this removal of PCBs from the Housatonic River, in Massachusetts.

The latest skirmish in the decades-long scientific battle over the health risks of the most toxic form of dioxin is heating up. The Environmental Protection Agency fired the first shot of this new clash in May, when it issued a draft report classifying 2,3,7,8-tetrachlorodibenzo-p-dioxin (TCDD) as a known human carcinogen. EPA also for the first time set a safe daily dose for TCDD based on its adverse effects on reproduction (C&EN, May 31, page 41).

Some chemical manufacturers that are major producers and users of chlorine face liability for cleanup of sites contaminated with these compounds. They are readying retorts to the draft that target its scientific basis. The Pentagon is doing likewise because it too faces cleanup liabilities from its past use of PCBs.

At the same time, environmental and health activists are preparing their defenses of the report. They are calling for the prolonged scientific combat to end and for EPA to finalize the long-pending TCDD risk assessment.

TCDD is linked to cancer, immune-system effects, reproductive problems, and other adverse health consequences. The chemical gained notoriety as a contaminant in the defoliant agent orange deployed during the Vietnam War. It also is an inadvertent by-product of a number of industrial processes, including the manufacture of some chemicals, pulp, and paper, and the burning of wastes. However, industrial releases of the compound have declined sharply since the late 1980s. The public is exposed to TCDD mainly through eating beef, dairy products, pork, and fish.

EPA's Assessment Of Dioxins Drags On

The Environmental Protection Agency has been studying the risks associated with dioxins for nearly 30 years. Below are key dates in this process.

1991 The agency begins a reassessment of dioxins.

1995–2000 EPA revises the draft reassessment on the basis in part of the SAB review.

EPA first assessed the risk of TCDD in 1984. The agency began a reassessment in 1991 and has been embroiled in scientific controversy ever since. In 2003, EPA released its most recent draft reassessment, which the National Academy of Sciences subsequently reviewed. A 2006 report from NAS criticized EPA’s work, in part for not sufficiently quantifying the uncertainties associated with TCDD’s cancer risk. EPA’s May draft report is the agency’s response to the 2006 NAS critique of its 2003 draft reassessment.

This week, EPA’s external Science Advisory Board (SAB) reenters the fray as its Dioxin Review Panel holds three days of public meetings to peer review the agency’s draft document. Once it completes this task, the board will submit a report that the agency will use as it finalizes its response to NAS, according to Glenn E. Rice, coleader of EPA’s dioxin team.

In late June, the SAB panel got a foretaste of the conflicts over EPA’s draft document at a teleconference during which members of the public and industry representatives had a chance to share their views.

Environmental activists—including Judy Levin, pollution prevention coordinator at the Center for Environmental Health, a California-based advocacy group—strongly urged SAB to finish its peer review with due speed. The activists want EPA to finalize the TCDD risk document as soon as possible.

“The delay in releasing the dioxin reassessment has allowed our population to be continually exposed and has stood in the way of our government moving to needed regulation and important dioxin policies to protect public health,” Levin said.

“We believe 20 years is more than enough time,” Levin added. She expressed concern that “even after this additional time, opponents will once again say they need additional time, they will raise unnecessary questions, say further study is required, and basically try to create doubt.”

Industry representatives, on the other hand, raised specific scientific issues about EPA’s latest document. For example, Lesa L. Aylward, a consultant who spoke on behalf of the Chlorine Chemistry Division of the American Chemistry Council, an association of chemical manufacturers, questioned EPA’s continued use of the linear model to determine the cancer risk from exposure to low levels of TCDD.

The linear model assumes that the cancer risk from TCDD rises in direct proportion with dose, noted Aylward, a principal at consulting firm Summit Toxicology. This model uses data from high-dose animal studies to extrapolate the risk from the levels found in the environment, which are significantly lower than those found in lab experiments to cause cancer, she added.

NAS recommended that the agency use a nonlinear model in addition to a linear one to estimate TCDD’s cancer risks and to describe the strengths and weaknesses of each, Aylward pointed out. This information, the academy stated, could then be used by regulators as they make decisions on pollution control and cleanup.

In the nonlinear models, risk rises less than proportionally with dose. One such model assumes that below a certain threshold of exposure, there is no risk of cancer. Using a nonlinear model would lower the estimate of risk from TCDD and would likely lead to less extensive and less expensive cleanups of contaminated sites.

Jay B. Silkworth, a toxicologist with General Electric, looked ahead at how EPA would apply its new analysis to determine cleanup levels for contaminated sites. GE is addressing a legacy of PCB use in decades past. Notably, the company is cleaning up part of the Hudson River, in New York, and has remediated stretches of the Housatonic River, in Massachusetts.

Silkworth questioned the conversions, called toxicity equivalency factors (TEFs), that regulators use to compare the hazards of the various PCBs, dioxins, and furans. For these comparisons, TCDD—the most hazardous of the chemicals—is assigned a value of one and the other congeners are assigned a fraction.

Regulators use these conversions to determine how much cleanup a polluted site needs. First, they examine which congeners and their relative amounts are present at a site. Then, using TEFs, they calculate how much TCDD would pose the same hazard, even if TCDD isn’t actually found at the site. They would then use that TCDD value to assess the site’s cleanup requirements.

TEFs are limited, however, because they are derived primarily from studies with laboratory rodents, Silkworth pointed out. EPA assumes that rodents and people respond similarly to dioxins, he said. But studies have shown that some dioxins, notably some PCBs, are less potent in human-cell cultures than TEFs predict, he said.

“EPA should, at the very least, attempt to reduce some of the inherent uncertainty by dealing with the clear species differences” for TEFs in its response to NAS, Silkworth said.

Industry is not alone in its scientific criticism of EPA’s draft report. The document also faces challenges within the federal government. The Defense Department, backed by the National Aeronautics & Space Administration, is arguing that TCDD should not be considered carcinogenic to humans at all doses. Instead, EPA should characterize TCDD as carcinogenic to humans only at very high exposures and “likely to be carcinogenic to humans” at lower doses, the Pentagon says in a written response to the draft that was provided to the SAB panel ahead of this week’s meeting. Like some companies, the military and NASA face liability for cleaning up pollution resulting from the use and disposal of PCBs.

The White House Office of Management & Budget (OMB) is also pressuring EPA to alter the draft. In written comments, OMB suggests that it agrees with industry consultant Aylward about using nonlinear models to calculate dose. “It would seem that in this case, the nonlinear approach has significant biological support and thus it may make sense to present results using both approaches,” OMB states.

But other parts of the government seem to be in EPA’s court, according to written comments on the agency’s draft report. The Department of Health & Human Services calls the draft “scientifically robust.” And the Agriculture Department characterizes it as “very thorough, well written, and well documented.”

The scientific conflict over TCDD will likely grow more intense in coming months. The clash is supposed to end soon, however, as EPA Administrator Lisa P. Jackson has directed the agency to complete the risk reassessment by the end of 2010. But given the fight that those facing pollution liability are putting up, that deadline could slip, allowing the battle to rage on.

Policy
Weighing In On EPA Research
Environment
Dioxins, Assessed At Last
Policy
Dioxins More delays for EPA assessment of the chemical’s most hazardous form
Share X
To send an e-mail to multiple recipients, separate e-mail addresses with a comma, semicolon, or both.
Title: Dioxin Science Wars
Author: Cheryl Hogue
Chemical & Engineering News will not share your email address with any other person or company.