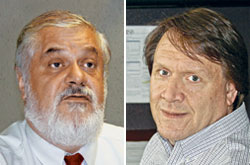 After more than three years of being two members short, the five-member Chemical Safety & Hazard Investigation Board is fully staffed. The two vacancies were filled on June 25, when the Senate confirmed Rafael Moure-Eraso as the new CSB chairman and Mark A. Griffon as a board member.

Moure-Eraso takes over for former CSB chairman John S. Bresland, who voluntarily stepped down from the top slot but remains on the board. The new chair and the new member come in at a busy time for the board, which has a record 19 investigations in progress.

However, CSB is trying to free up time because it has agreed to a congressional request to investigate what could become the board’s largest accident investigation ever: the BP/Deepwater Horizon oil rig blowout in the Gulf of Mexico (C&EN, June 28, page 11). The rig investigation could be a challenge for the diminutive board, which has a budget of only $10.5 million and a staff of 40.

Moure-Eraso estimates that the oil rig investigation will take two years and cost in excess of $2.5 million, similar in time and cost to the board’s investigation of another BP accident: the 2005 BP Texas City, Texas, refinery explosion that killed 15 workers. Indeed, it was because of CSB’s experience in the earlier BP accident that members of Congress urged the board to investigate the oil rig explosion.

CSB’s probe will focus on the accident’s cause, Moure-Eraso says, but will also examine broad training, safety, and work organization issues. The board will have to “rearrange things and adapt” to the increased workload, the new chair says, but “we can’t sit this out.”

Moure-Eraso comes to the board after 22 years as a professor in the School of Health & Environment at the University of Massachusetts, Lowell. He holds a doctorate in environmental health and bachelor’s and master’s degrees in chemical engineering.

Before joining academia, Moure-Eraso, 63, was an industrial hygienist with the Oil, Chemical & Atomic Workers Union and the United Auto Workers for 15 years, as well as an adviser to the Department of Labor and the National Toxicological Program. He began his career as a chemical engineer with stints at Rohm and Haas and at Dow Chemical.

Griffon, 48, also has union connections and ties to UMass Lowell, where he took part in worker training and programs to reduce toxic chemical use. He began a 20-year career in occupational health as a project manager at Chemical Waste Management. In 1992, he formed his own environmental and occupational health and waste management consulting firm.

Since 2002, Griffon has been a member of the Federal Advisory Board on Radiation & Worker Health, a panel appointed by the President that guides a compensation program for former nuclear weapons complex workers with work-related illnesses. Griffon holds a bachelor’s degree in chemistry and a master’s degree in radiological sciences.