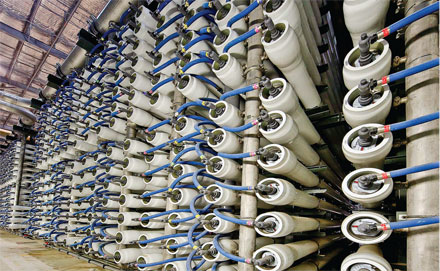 To most people, the statistic that by 2015, 5 billion of the world’s citizens will live in areas of significant water stress would not be considered good news. But for firms with water treatment businesses, it suggests a future of strong demand for both new and existing technologies.

Of the many mechanisms available for treating water, industry analysts say membranes have become the dominant and fastest growing. Membranes now cost about the same as older technologies such as distillation, and they produce higher quality water. Reverse-osmosis membranes, for example, are now in 60% of desalination plants and are growing faster than alternative treatments.

But changes are coming in the market for water treatment membranes. Increasingly stringent regulations for water quality and wastewater discharge in developing economies are putting a new emphasis on wastewater, rather than seawater, as the preferred source of water for treatment facilities in water-poor regions.

The shift threatens to shake up the position of the dominant players in the water treatment industry. New wastewater plants in the developing world will rely heavily on ultrafiltration membranes to pretreat water, and this segment of the industry is projected to grow faster than the market for reverse-osmosis membranes. 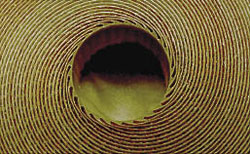 One firm that will need to adjust to the new landscape is Dow Chemical. Dow calls itself the leading supplier of reverse-osmosis membranes and ion-exchange resins, the latter from its acquisition of Rohm and Haas. But Dow’s lack of a leading position in the latest ultrafiltration membranes threatens to become a liability, industry watchers say.

David A. Klanecky, global R&D director for Dow Water & Process Solutions, sees many more positives than negatives for the firm. For example, “the Chinese market is one everyone is paying attention to in terms of growth, and the government is serious about the environment and things like water reuse,” he says. “It gives us an opportunity to look at water reuse and be a technology provider, and ensure we have the best systems and the best cost-performing systems.”

Dow shares the top slot in the overall water treatment business with General Electric and Siemens. The top three players control 65% of the market for reverse-osmosis membranes, according to Pike Research, a clean-technologies consulting group.

Supplying seawater desalination plants will continue to be a big business. Spending on the plants will double from $8.3 billion in 2010 to $16.6 billion by 2016, Pike Research predicts. Growth has already taken off. In the first quarter of 2010, Dow reported that demand for its reverse-osmosis membranes rose substantially in all regions.

Developing countries’ growing need for abundant and clean water will drive demand for membranes over the next two decades, analysts say. Companies with broad product portfolios stand to benefit. “From the Indian or Chinese government’s perspective, firms like Dow and GE are reputable companies with experience on larger projects,” says Reka Sumangali, an associate at the market research firm Lux Research. “They want to work with someone with a higher level view of the whole system.”

But the leading firms will not be able to depend just on their desalination expertise to capture the growth. “Wastewater treatment will be one of the fastest growing markets for membrane-based filtration,” Sumangali reports. That’s because a lot of legislation in developing countries is “requiring water used by industry or households to be treated before being released into rivers and streams.”

The legislation may tip the balance in favor of water reuse. “The cost of reuse is about 20 to 50% cheaper than desalination, primarily because wastewater has to be treated anyway before discharge,” explains Yuvbir Singh, general manager for ultrafiltration, membrane bioreactors, and advanced biological metal removal at GE. According to Global Water Intelligence, water reuse will grow by 18% per year through 2016, whereas desalination will expand at just 6% per year.

Dow, however, points out that source water—and the technology to treat it—varies greatly depending on the region. “China, India, and Latin America are all places where in the end it’s about both quality and quantity,” Klanecky observes. “Australia and Spain have very little water and are focused on desalination. India is more of a quality-of-water play. They have to look at ‘Do I do seawater desalination if I’m on the coast, or do I clean up the water sources I already have?’ ”

Industry observers perceive Dow as being disadvantaged when competing on water reuse projects because it lacks a strong market position in ultrafiltration membranes. Ultrafiltration is becoming the technology of choice for water pretreatment in municipal and industry water systems, edging out chemical, biological, and older filtration technologies, analysts say. Many facilities are planning to install ultrafiltration whether or not they then use reverse osmosis to further clean the water.

What’s more, even in seawater desalination plants, the biggest growth in installed membranes will happen upstream of reverse-osmosis filters. Ultrafiltration membranes, with pore sizes of 0.1 to 0.0001 μm, can do a lot of the heavy lifting to rid water of high-molecular-weight particles and contaminants, saving wear and tear on more expensive reverse-osmosis systems.

Ultrafiltration is one of the core technologies at GE, Singh says. He predicts that the firm will do well in places such as India and China, where wastewater will be increasingly treated, and in Singapore, which has plans to blend treated wastewater with drinking water. “We use ultrafiltration for pretreatment of reverse osmosis, and we can extend the life and efficiency of reverse-osmosis membranes used for potable applications,” he explains.

In contrast, Klanecky acknowledges that Dow is a relative newcomer to the ultrafiltration business, although it has plans to expand its product line. The company purchased the Chinese ultrafiltration company Omex Environmental Engineering in 2006.

According to Lux’s Sumangali, the two largest companies specializing in ultrafiltration membranes are the Dutch firm Norit and Germany’s Inge Water Technologies. Both companies say their technologies focus on increasing flux—the amount of water that can flow through a square meter of membrane—and decreasing the need for chemicals such as coagulants in the overall treatment system.

Norit says its membranes reduce costs by offering the highest water output and retention performance while occupying the smallest amount of space. The company claims that its products are installed in 40% of the world’s largest ultrafiltration plants.

At Inge, Steis says, the focus has been on the toughness of the membranes. “Our technology is multibore—it looks like a honeycomb or a straw with several capillaries—while our competitors’ products look like a single strand of spaghetti.” He explains that the construction of the membranes, made from polyethersulfone, provides chemical stability in a wide pH range. Moreover, he says, the surface fibers don’t break, which was a downside with early ultrafiltration membranes.

In contrast to the still-emerging ultrafiltration market, Sumangali says, the more mature reverse-osmosis market is threatened by competition from China. She has not seen new types of materials emerge; the leading membranes continue to be made of the same polysulfone-coated polyamides. But firms can differentiate their products by bundling them with performance chemicals and services, she observes.

Paul Turgeon, CEO of BWA Water Additives, a supplier of water treatment chemicals, says his firm works with manufacturers of reverse-osmosis equipment and that many plants are designed to work with BWA’s suite of chemicals. “We are differentiated by our line of products based on antiscalants, antifoulants, and antifoams. The plant operator can make sure the membrane is kept clean for as long as possible without any negative impact on performance or life span.”

At the same time, manufacturers are looking for new polymer enhancement technologies that, if economically scalable, may make membranes work more efficiently. Dow’s Klanecky says it’s all about the balance between flux and contaminant retention. “There are two things I can do, both by functionalizing the surface. I can change the pore structure of the polymer to allow more water to go through, using nanoparticles or other layers of membrane on the surface.” And on the retention side, he says, “certain surface structures allow us to selectively reject particular salts and solutes.”

Meanwhile, Klanecky says Dow hopes to strengthen its ultrafiltration offerings to provide one-stop shopping for treatment facilities. “If we know that a customer will use Dow ultrafiltration membranes in front of Dow reverse-osmosis membranes, we can differentiate there,” he says. “As we integrate ultrafiltration and reverse osmosis, we can know from start to finish what that water looks like and what we can do to put in an aggressive design for the best quality at lowest cost.”