[+]Enlarge
Credit: Merck & Co.
Merck researchers will be laid off as a result of the firm’s new round of site closures. 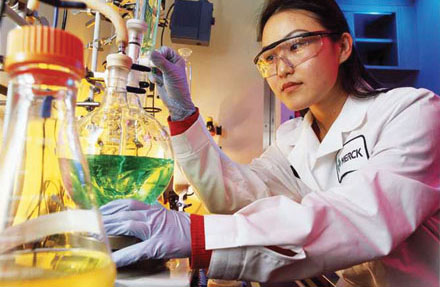 Credit: Merck & Co.
Merck researchers will be laid off as a result of the firm’s new round of site closures.

Merck & Co. has unveiled details of its previously announced plans to lay off 15% of its staff, or almost 16,000 employees, following last year’s acquisition of Schering-Plough. The company will end activities at 16 locations around the world, closing an equal number of R&D and manufacturing sites.

Starting this year, production will be phased out at eight manufacturing sites, bringing Merck’s global network to 77 facilities. The company will try to sell two of the sites—in Mirador, Argentina, and Miami Lakes, Fla.—while the rest appear earmarked for outright closure. The 29 animal health facilities that will be part of a pending joint venture with Sanofi-Aventis’ Merial unit are unaffected by the action.

Research activities will be significantly affected by the consolidation. The decision to exit research at eight sites in North America and Europe will leave Merck with just 16 R&D facilities across the world.

a Former Organon sites. b Will be sold.
SOURCE: Merck & Co.

Organon, the human and animal health care business that Schering-Plough bought just three years ago from AkzoNobel for $14.4 billion, will be hit hardest by the R&D cuts. The entire Organon R&D division in the Netherlands appears to be on the chopping block, although Merck says some women’s health activities will be transferred to the U.S. Merck spokeswoman Amy Rose confirms that roughly 2,200 jobs, including about 1,000 in R&D, will be affected by the closure of labs in Oss, the Netherlands.

Meanwhile, Nobilon, Organon’s vaccines unit in Boxmeer, the Netherlands, will be closed, along with a site in Schaijk, the Netherlands. Other affected former Organon sites are in Waltrop, Germany, and Newhouse, Scotland.

The decision to close the Merck Frosst Center for Therapeutic Research, in Montreal, comes as a blow to Canadian chemists. Merck Frosst invests some $115 million annually in R&D in Canada, making it one of the top 20 corporate R&D spenders in the country. Rose says a small number of the 180 scientists employed at the Montreal site are expected to be offered jobs at other Merck facilities. To soften the impact of the closure on the local economy, Merck will spend $95 million over the next five years on R&D pacts with biotech firms and academic institutions in Quebec.

Facing patent expirations on multiple blockbuster drugs, Merck had been trimming its R&D operations even before it took over Schering-Plough’s assets. In 2008, the company said it would trim its workforce by 7,200 employees. Research facilities in Seattle; Tsukuba, Japan; and Pomezia, Italy, were set for closure. Merck had already ended natural products research in Spain, a move that cost R&D jobs in both Spain and Rahway, N.J.

Merck’s cutbacks come as the entire pharmaceutical industry reassesses its approach to research (C&EN, June 7, page 13). With the number of new drug approvals falling, generic competition getting tougher, and the price of medicine under pressure, companies are focused on increasing efficiency in their operations. One strategy has been to outsource R&D functions that previously would have been done in-house.

As a consequence, planned cuts at Merck, Pfizer, Astra­Zeneca, GlaxoSmithKline, and Eli Lilly & Co., among others, will result in tens of thousands of R&D job losses in the coming years.