DIAL IT UP
[+]Enlarge
Credit: Verdezyne
A researcher at Verdezyne sets parameters for making adipic acid via fermentation. 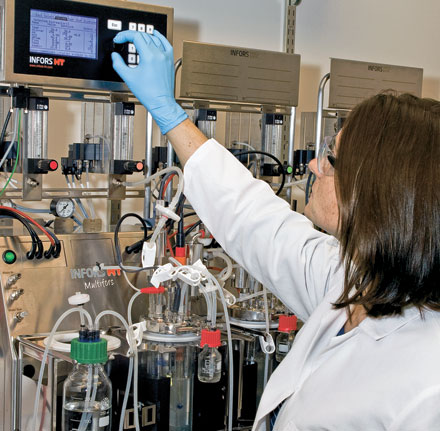 Companies at the World Congress on Industrial Biotechnology & Bioprocessing, held in Washington, D.C., late last month, all claimed to have the formula for biobased success. More and more, that formula includes high-volume chemical products.

In recent years, the focus of the congress has been on biofuels, but now, biotech executives are “like little kids playing soccer—everyone is rushing to chemicals,” observed Jim Imbler, chief executive officer of cellulosic ethanol and chemical firm ZeaChem. But he questioned: “How many can say, ‘We have an economic proposition, and here’s where we will make money’? ”

Executives at the event readily admitted that competing with petroleum feedstocks is a high bar, but they claim their technology platforms for chemicals will bring in healthier profits than what fuel-focused companies can achieve. They make the case that scale-up of efficient processes is happening now. Still, they all eagerly anticipate a time when the launch of a commercial-sized biobased chemical facility is seen as routine rather than quirky.

Until then, raising funds to commercialize a new manufacturing process will be difficult at best.

“It’s a tough time for companies that are trying to scale up and are looking for significant infusions of capital,” said Damien Perriman, vice president of business development at biobased-chemical firm Verdezyne. But he pointed to announcements of early commercial-scale projects, several for succinic acid. “This is progress, and as far as our expectations are concerned, the industry is moving along at an appropriate clip,” Perriman remarked.

Indeed, several players targeting succinic acid spoke at the congress, including representatives from Myriant Technologies, DNP Green Technology, and Reverdia, a joint venture of DSM and Roquette. All said they were confident that their product will become a popular biobased intermediate for downstream chemicals (C&EN, Dec. 14, 2009, page 23).

In addition to the progress made in succinic acid, start-up Elevance Renewable Sciences has given Perriman some of the evidence he seeks. The company announced at the event that it will construct a commercial-scale biorefinery in Surabaya, Indonesia, with joint-venture partner Wilmar International, a global agribusiness group. The 200,000-ton-per-year facility will produce green olefins—C18 dicarboxylic acids and esters—from renewable oils through olefin metathesis.

“There are a few of us stepping out now,” said Andrew L. Shafer, executive vice president for sales at Elevance. By “us,” Shafer meant companies pursuing biorefineries. “The concept is much like a petroleum refinery: Make many products and achieve a large scale,” he said. By selling into existing markets and competing on price, “we’ll be unique in that we will be profitable from the beginning.”

Also at the meeting, ZeaChem’s Imbler reported on his firm’s progress in filling out its C2 product line. The company uses an acetogenic fermentation process along with thermochemical steps to create acetic acid and ethyl acetate from poplar tree cellulose. ZeaChem has begun making ethanol from ethyl acetate, Imbler announced, and is currently building a 250,000-gal-per-year biorefinery in Boardman, Ore.

Because the price ZeaChem can get for ethyl acetate is about double that of ethanol, the announcement required a bit of explanation. “Our main goal is to try to make money in our original markets for acetic acid, where we just clean and concentrate the product,” Imbler told C&EN. “Then we would sell ethyl acetate or other esters. These higher-priced chemicals we would make early, but they are a relatively small market.”

To operate a commercial-scale plant, Imbler said, would require the firm to “tap off the acid and sell ethanol if it is profitable.” He claimed ZeaChem’s cost of ethanol production will be about $1.00 per gal.

Imbler also reported that ZeaChem is pushing forward with a different organism for fermentation of C3 chemicals including propionic acid, propanol, and propylene.

Like ZeaChem, start-up Verdezyne plans to generate revenue from the ethanol industry, although its main product will be the chemical intermediate adipic acid. The firm’s pathway to profitability is very different from ZeaChem’s. Rather than begin by building a biorefinery, it is working with yeast supplier Lallemand Ethanol Technology to genetically engineer a high-yield yeast strain for sale to corn ethanol producers. The partnership will generate revenues for Verdezyne starting in 2012, Perriman said.

“We still have a long way to go to optimize the organism and process. Our next step is to deploy an organism to pilot scale,” Perriman said, adding that he anticipates another 12 months of work. The company estimates the cost of producing adipic acid will be less than $1.00 per lb.

In contrast to firms pursuing multiple products, start-up OPX Biotechnologies is focusing intently on biobased acrylic acid. The high-volume commodity could be used in consumer goods including diapers and detergents, as well as in paints and adhesives. CEO Charles R. Eggert told C&EN that the company is close to reaching its cost goal of 50 cents per lb, which is less than the cost of the petroleum-derived competition. Eggert said OPX may reach its target this summer or by the end of the year at the latest.

Beating the cost of petroleum is also the goal at Genomatica, which has a process for making 1,4-butanediol (BDO), an ingredient in performance materials such as thermoplastic polyurethanes and spandex. The company recently scaled up its lab process to a 3,000-L pilot facility using sugar as the feedstock. Dennis McGrew, Genomatica’s executive vice president for business development, told C&EN he was at the meeting in part to find partners for the next step—an integrated demonstration site that would produce test quantities of the product.

“We’re looking to partner up and down the value chain, from sugar providers to current BDO makers, BDO consumers, and even further downstream,” McGrew said.

While the chemicals-oriented biotech firms scale up their operations and develop new product lines in coming years, they will need to continue bringing in capital. OPX’s Eggert said his firm is planning a $50 million venture capital funding round in the fall, and the other executives say they will also continue to raise cash.

Although the funding climate will remain tough, firms with the technology to produce a suite of high-margin chemicals will be able to find investors, predicted Richard Youngman, vice president of global research for the Cleantech Group, a market research firm.

“The companies that seem to attract funding are ones where part of their future market may be a biofuel, but they also have a platform for a number of different biochemical products,” Youngman said. Investors appreciate firms that have other markets in the short term while they work on biofuels, he explained. It’s an important distinction, “because there is a lot of skepticism in some quarters about whether some companies have the ability to go directly from the lab to compete with fossil fuels.”

ZeaChem’s Imbler said he looks forward to seeing more chemical firms make the leap to commercialization, because it will benefit all companies in the nascent industry. “It takes a village to make biobased chemicals,” he remarked.

Perriman sounded a similar note. “The news that caught my eye was from the companies that have been working on this for several years and are now able to talk about commercial scale. It’s pushing the industry along. We’re no longer an industry stuck in the lab,” he said.