CAUTION
[+]Enlarge
Credit: Newscom
Concerns about the safety of Avandia prompted an FDA advisory panel to recommend that stronger warnings and restrictions be placed on the drug. 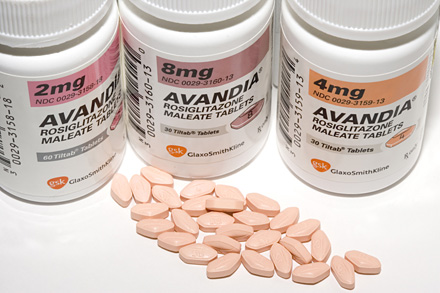 Credit: Newscom
Concerns about the safety of Avandia prompted an FDA advisory panel to recommend that stronger warnings and restrictions be placed on the drug.

An advisory panel of the Food & Drug Administration voted on July 14 to keep the controversial diabetes drug Avandia (rosiglitazone) on the market, despite evidence linking the drug to an increased risk of heart disease. The panel did, however, recommend tightening warning labels and restricting sales of the drug.

FDA Commissioner Margaret A. Hamburg will now have to decide what action to take. The agency is under pressure to move swiftly from members of Congress and advocacy groups, who claim that Glaxo­SmithKline (GSK), the maker of Avandia, hid data relevant to the safety of the drug. Congress is also looking closely at this case to determine whether FDA’s office of drug safety is in need of reform.

The Senate Finance Committee, in particular, has been investigating the safety of Avandia since 2007. In a report released in February, the committee found that GSK promoted the drug despite studies suggesting serious health risks. Committee Chairman Max S. Baucus (D-Mont.) and ranking member Charles E. Grassley (R-Iowa) sent more details of that investigation to FDA on July 12.

The finance committee uncovered e-mails from executives of GSK discussing whether to publish studies that found problems with Avandia. In one e-mail dated July 20, 2001, an executive wrote: “We would hope that these do not see the light of day.” The committee provided FDA with several other e-mails, all of which suggested that the company tried to hide studies that pointed to an increased risk of heart disease with Avandia compared with its rival drug, Actos (pioglitazone), made by Takeda Pharmaceuticals.

GSK responded to the finance committee’s investigation, saying the e-mails were taken out of context from product liability litigation. The drugmaker is facing thousands of lawsuits alleging that it failed to alert consumers to risks of heart failure and other injuries related to taking Avandia.

“The Senate Finance Committee has released a small subset of the 14 million pages of documents provided to plaintiffs’ counsel in the product liability litigation,” the company said in a statement. “GSK has been diligent in providing its safety data on Avandia to the FDA and in publishing its clinical trial data in peer-reviewed journals or on its clinical trial website.”

Avandia was approved by FDA in 1999. The once-blockbuster drug saw its sales plummet in 2007, after publication of a paper by Steven E. Nissen, a cardiologist with the Cleveland Clinic, that showed Avandia increases the risk of heart disease.

FDA was first warned about the heart risks of Avandia four years ago by one of its own scientists, who eventually left the agency after being reprimanded for suggesting that a warning be placed on the drug, according to the Union of Concerned Scientists, an advocacy group. “It is time for the agency to give its own scientists the respect they deserve when they raise red flags about the drugs they’re evaluating,” stressed Francesca Grifo, director of scientific integrity at the Union of Concerned Scientists. “We have a new Administration in office, and in spite of efforts by FDA leadership, it is still business as usual at the agency.”

Grassley noted that he intends to keep pushing FDA to reform its drug safety office. “What’s happened with this drug further makes the case about the need to strengthen the office within the FDA that monitors drug safety after a drug is on the market,” he said.

Rep. Rosa L. DeLauro (D-Conn.), chairwoman of the House of Representatives Appropriations Subcommittee on Agriculture, which has jurisdiction over FDA’s budget, is also closely monitoring the Avandia controversy. In response to the advisory panel’s vote, she urged FDA to remove the drug from the market.

“I understand that there may be a lack of consensus on the effects of this drug at the FDA. But the result of the advisory committee vote is gravely disappointing and raises serious questions as to whether the science was presented in an unbiased manner to the committee members,” DeLauro said in a statement. “Given the compelling evidence revealed in the weeks leading up to this advisory committee meeting, it is incomprehensible that 20 committee members still voted to keep Avandia on the market. I intend to ask FDA some serious questions.”

Safety
FDA Risked Integrity During Heparin Crisis
Business
Mixed Fate For Avandia
Policy
FDA Panel Votes In Favor Of Avandia
Share X
To send an e-mail to multiple recipients, separate e-mail addresses with a comma, semicolon, or both.
Title: FDA Panel Votes In Favor Of Avandia
Author: Britt E. Erickson
Chemical & Engineering News will not share your email address with any other person or company.