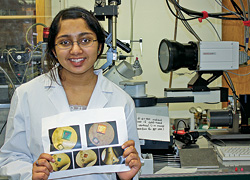 Credit: Courtesy of Hazel Holden
Kaur shows off photos of her crystals.

Kids seem to be growing up faster these days: Elementary school children have their own cell phones, preteens are networking via personal Face­book pages—and middle schoolers are COAUTHORING peer-reviewed articles in chemistry journals.

At least that’s the case for Manpreet Kaur and Marie K. Avey of Edgewood Campus Middle School, in Madison, Wis. These seventh graders were recently listed as contributors on a paper entitled “Molecular Architecture of a C-3ʹ-Methyltransferase Involved in the Biosynthesis of D-Tetronitrose” in the journal Biochemistry (2010, 49, 5891).

And they aren’t just authors in name. According to Hazel M. Holden, principal investigator for the study and a professor of biochemistry at the University of Wisconsin, Madison, “Marie and Manpreet learned about cloning, protein expression, protein purification, and crystallization. They did all the steps.” It was even Kaur who grew the crystals that led to the structure determination of the enzyme C-3ʹ-methyltransferase.

The youngsters got the opportunity to work in a graduate-level laboratory through Project CRYSTAL, a National Science Foundation-funded program started by Holden and Edgewood teacher Dan Toomey. By the time students “reach high school, it is almost too late to instill a joy for chemistry and physics,” Holden says, so she and Toomey established the project for sixth-, seventh-, and eighth-graders.

Kaur and Avey began their work in September 2009 and “spent one day a week in the lab for three hours,” Holden tells Newscripts. “The crystals that they grew were the ones crystallographers dream about—easy to grow and easy to manipulate,” she adds. Working with graduate student Nathan A. Bruender, the seventh-graders produced and X-rayed crystals just in time for their holiday break, at which point Bruender took over and solved the enzyme’s structure.

Although Project CRYSTAL has only just closed the books on its first year, Toomey says that he can already see how engaged the students have become. Kaur’s mother, Harpreet, agrees, explaining that her daughter “is now more interested in the future than ever before.” That future—at least the immediate one—holds a move up to the eighth grade for Kaur and Avey, as well as a return to Holden’s lab at the end of this month. 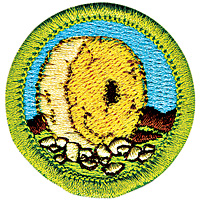 Credit: Boy Scouts of America
Boy Scouts will always be prepared to defend their intellectual property.

Another organization working to instill excitement about the future and a love of science in youngsters is the Boy Scouts of America. On June 17, BSA unveiled its newest MERIT BADGE for inventing as part of EurekaFest, a multiday event held at Massachusetts Institute of Technology to celebrate and inspire creativity and innovation in youth.

The new badge is designed to enable boys to discover their “inner inventiveness” and to creatively think of ways to improve the lives of others, according to BSA. To earn the badge, scouts are required to learn about intellectual property, patents, and patent infringement. And of course, they must invent something useful and build a prototype.

So far, about 100 industrious boys have earned the Inventing merit badge, says Renee Fairrer, manager of media relations for BSA. Only time will tell whether the new badge is as popular as some others: The Mammal Study badge, for example, is among the most coveted of Boy Scout prizes, having drawn 31,245 out of approximately 890,000 boys to earn it last year.

And Newscripts was happy to learn that the Chemistry merit badge, introduced in 1911, is still holding its own: Out of more than 120 possible badges, it came in at number 57 last year, with 8,248 scouts taking it home.