Freeslate, a Symyx Technologies spin-off, can now focus on tools for high-throughput experimentation 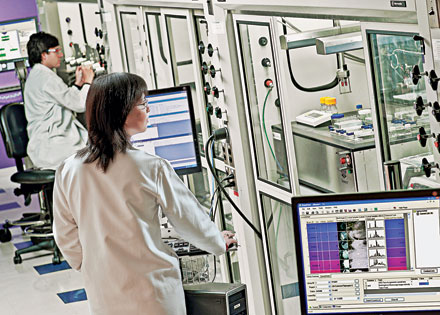 Start-up companies meet various fates. Some get acquired, some grow up, some fail, and some change their business model. Laboratory software and high-throughput-experimentation equipment provider Symyx Technologies has had many such destinies.

When the Sunnyvale, Calif.-based firm started up 16 years ago, it set out to apply the hot new technology of combinatorial chemistry to materials R&D. During the past decade, the company established services, research tools, and software businesses that attracted many big-name customers. Along the way, it spun off a therapeutics company, Ilypsa, which Amgen later acquired.

By 2009, Symyx’ revenues were $150 million, with 59% coming from software and the rest from its high-productivity research (HPR) unit. But big deals with ExxonMobil and Dow Chemical had expired, and its revenues began to decline. It was losing money, and its stock price sagged. Faced with these changes, the firm’s management decided to focus on software and sell the HPR operations. The result, formed on March 9, is a new HPR company called Freeslate.

Freeslate is led by John S. Senaldi, whom Symyx hired from Bio-Rad Laboratories in late 2009 to head the HPR business. A few months after he came aboard, Senaldi stepped forward with the offer of a management buyout, and Symyx accepted. Now leading a privately held firm dedicated to HPR, Senaldi thinks he can create a viable, growing company focused on markets beyond catalysts and plastics by continuing the business-model revamp started by Symyx.

Symyx retained a 19.5% stake in the new company, and Freeslate’s more than 90 employees, who are largely scientists and engineers, own the rest. On July 1, what remained of Symyx was acquired by Accelrys.

Freeslate owns or has license to technology and intellectual property in microscale, high-throughput, and parallel experimentation. Its Lab Execution & Analysis software integrates lab operations and handles data analysis. Its customers, including former Symyx clients, come from across the chemical, energy, life sciences, and home and consumer products industries.

Although Freeslate serves a variety of customers, their R&D organizations face common challenges, Senaldi says. “What we do is enable our customers to think differently about the way they do R&D and help them redesign their work process so that they can make step-change gains in innovation and productivity,” he says. Although they can buy stand-alone equipment, he adds, many customers have multiple systems integrated across multiple locations.

Most customers of Symyx’ HPR business had been in the chemical and energy sectors, with fewer in the life sciences. “Now we are seeing a pretty even split,” Senal­di says. He pegs Freeslate’s revenue growth in the life sciences and personal care markets at a double-digit percentage as firms become more interested in adopting the technology.

In April, for example, Freeslate entered a partnership with Johnson & Johnson Pharmaceutical Research & Development. The scope of the deal includes tools for development and formulation of both small-molecule and biologic drugs. The underlying platform is a third generation of the business’s core module system, launched in March, that can run arrays of applications.

In chemicals and energy, some markets are slowing while others are taking off, Senaldi points out. The emerging area of biorenewables, for example, offers high-single- to low-double-digit growth, he says. Just before the spin-off of Freeslate, Symyx agreed to supply two systems to the Department of Energy’s Pacific Northwest National Laboratory to support catalyst development for biomass conversion and renewables research.

The business also has provided products to the biobased chemical start-up Rennovia, in Menlo Park, Calif., whose managers include former Symyx scientists. Use of the technology for semiconductor R&D has been licensed to Intermolecular, in San Jose, Calif. A more recent Symyx deal is one to supply a system for zeolite synthesis to Sinopec.

Despite the recession’s impact on R&D spending, customers continue to invest in technology to improve their productivity, Senaldi says. Freeslate is also making inroads with new customers. “Three years ago, over 50% of our business would have been with a few customers. Now, it’s much more diversified,” he says.

In 2006, the major deals with Dow and ExxonMobil were at their peak and brought in a combined $80 million, or more than 60% of Symyx’ revenue. The five-year Exxon­Mobil contract expired in mid-2008, and Dow’s contract followed in late 2009.

After taking these blows, Symyx restructured the HPR business right before it sold it. Anticipating a decline in demand for research services, it reduced the staff by nearly half, or 75 employees. It also closed an underperforming contract development and manufacturing operation.

Although Dow signed a limited extension and Freeslate continues to provide it with tools and services, royalty rights to any products arising from discoveries covered by such legacy agreements remain with Symyx.

Dow has talked about designing catalysts and polymers using high-throughput technology, but critics say other firms haven’t been as vocal about success with the technology. “For all the work that has been done and all the money spent, I can’t really point to a lot of large commercial successes,” says Richard Schlosberg, a chemicals and energy industry consultant. The approach “is much more likely to be successful for high-end specialty products than for commodity products,” he adds.

Symyx started a move away from its original intellectual-property-based business model under which it created technology, licensed it for royalties, and got paid for materials research, Senaldi says. Technology development remains important to Freeslate, but the focus will be on having a more consistent and sustainable business selling products and services. He doesn’t anticipate that licensing and materials discovery research will be a significant part of the company’s activities.

Freeslate competes with the European high-throughput systems and services providers HTE and Avantium, as well as with lab instrument providers such as Tecan, Chemspeed Technologies, and Zinsser Analytic. According to research firm Strategic Directions, the $280 million market for automated lab robotics is expected to grow 3.2% this year.

Senaldi sees Freeslate’s edge as being able to work closely with customers to redesign R&D processes and then provide integrated systems and software—not just “pieces of the equation”—to do the work.

The company won’t face the same pressures that it did as part of a publicly traded firm and can grow at a comfortable rate, Sen­aldi explains. “We expect to be profitable and cash-flow positive, with respectable year-over-year growth,” he says.