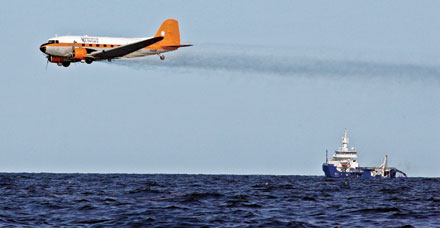 Many questions remain about the impact of oil dispersants on the environment, scientists told the Senate Committee on Environment & Public Works at an Aug. 4 hearing.

However, at a press briefing on Aug. 2, the Environmental Protection Agency announced that mixtures of crude oil and the dispersant chemicals used to break up oil slicks appear to be no more toxic to sensitive marine life than the oil itself.

Since the April 20 explosion of BP’s Deepwater Horizon oil rig in the Gulf of Mexico, more than 200 million gal of oil has poured into the sea. On Aug. 3, federal scientists classified the spill as the largest in history. BP has applied more than 1 million gal of the dispersant Corexit not only onto the oil slicks that formed on the ocean surface but also thousands of feet below the surface at the source of the leak.

“Application of dispersant at these depths is unprecedented,” Ronald J. Kendall testified at the Aug. 4 hearing. Kendall is chair of the department of environmental toxicology at Texas Tech University, Lubbock.

Last month, EPA presented the results of a study comparing eight commercial dispersants, which were all found to have similar toxicities (C&EN Online Latest News, July 8).

Paul T. Anastas, assistant administrator for EPA’s Office of Research & Development, said at the Aug. 2 press briefing that EPA’s new study shows that these same eight dispersants, when mixed with sweet crude oil, are no more toxic to mysid shrimp and small silverside fish than the crude oil alone.

Although BP has capped the leaking well and ceased using dispersants for the time being, scientists are aggressively pursuing studies that will characterize the disaster’s effects on the environment. Concerns about dispersant toxicity prompted the EPA studies.

EPA’s results are “very premature,” Kendall tells C&EN. “We’ve got a couple of organisms tested under favorable conditions,” he says. Animals that live in the cold, dark, high-pressure environment thousands of feet below the sea, where large quantities of oil still reside, might respond quite differently to the contaminants, he notes.

Samantha B. Joye, marine sciences professor at the University of Georgia, Athens, concurs with Kendall, telling C&EN that “conclusions like this need to be based on thorough testing against multiple species, and the findings should be verified independently by multiple labs.”

At the Aug. 4 committee hearing, David C. Smith, professor and associate dean at the University of Rhode Island’s Graduate School of Oceanography, called for the creation of a long-term National Research Plan for Oil Spill Response, which would undertake “peer-reviewed research in all environmental aspects of oil spill response, including the dispersal of oil in the deep sea.”

Dispersant use is an environmental trade-off, Edward B. Overton, emeritus environmental sciences professor at Louisiana State University, said at the hearing. “Offshore dispersant use represents a decision by responders that damage from onshore oiling will be more severe than damage to offshore environments,” he said.

The Aug. 4 hearing “is an important step in getting answers to the questions raised by this unprecedented disaster,” said committee Chair Sen. Barbara Boxer (D-Calif.).