[+]Enlarge
Credit: Peter Cutts Photography
Jackson maintains that EPA has the right to regulate CO2 under the Clean Air Act. 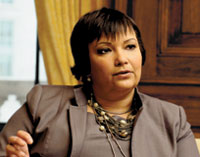 Credit: Peter Cutts Photography
Jackson maintains that EPA has the right to regulate CO2 under the Clean Air Act.

Some 24 states, environmental groups, trade associations, and conservative organizations sued the Environmental Protection Agency this week, challenging its plan to regulate carbon dioxide and other greenhouse gases under the Clean Air Act.

The lawsuits would block or modify EPA’s attempt to reduce emissions from large industrial greenhouse gas sources. The agency’s regulation is based on its “endangerment” finding that greenhouse gases, including CO2, endanger public health and should therefore be regulated. Suits came from those on both sides of the issue: groups that back EPA’s approach but want to make it broader, and industry groups and states that oppose EPA’s use of the Clean Air Act to cut CO2 emissions.

In 2007, the Supreme Court ruled that EPA could regulate CO2 as a pollutant under the Clean Air Act. As a result, EPA said last December that it would do so and began the regulatory process for controlling CO2 and five other greenhouse gases emitted by vehicles, electric utilities, chemical companies, and other sources (C&EN, Dec. 14, 2009, page 7).

Since then, EPA has moved ahead with final regulations for motor vehicles and is just now developing regulations for industrial sources. The deadline for filing litigation to block the agency was Aug. 2.

The agency, however, remains adamant in its push to move ahead. When recently challenged by petitions from 10 states, trade associations, and conservative organizations that opposed EPA on scientific grounds, agency Administrator Lisa P. Jackson denied the petitions, saying, “The endangerment finding is based on years of science from the U.S. and around the world.” She chided the petitioners, urging them to join “the vast majority of the American people who want to see more green jobs, more clean energy innovation.”

Pollution
Measuring microplastics in seafood
Persistent Pollutants
US FDA sets voluntary arsenic limit in infant rice cereal
Persistent Pollutants
Goodbye to some PFAS in food packaging
Share X
To send an e-mail to multiple recipients, separate e-mail addresses with a comma, semicolon, or both.
Title: EPA's Move On CO2 Reaps 24 Lawsuits
Author: Jeff Johnson
Chemical & Engineering News will not share your email address with any other person or company.