Examining The Endeavor Of Science

Exploring the history—and humanity— of the pursuit for scientific truth

NEVER PURE: Historical Studies of Science as if It Was Produced by People with Bodies, Situated in Time, Space, Culture, and Society, and Struggling for Credibility and Authority,
[+]Enlarge 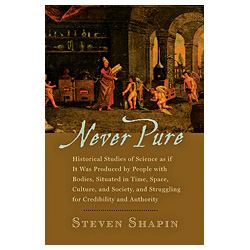 From the efforts of the ancient Greeks to the founding of the Royal Society to the launch of the Manhattan Project, scientists have always been people with hopes, needs, motivations, and shortcomings. They do not receive inspiration from on high or tap into a deeper power, they just wield their mortal powers more effectively than most other people. As Albert Einstein once put it, “The whole of science is nothing more than a refinement of everyday thinking.”

Now, Steven Shapin, a historian of science at Harvard University, advances Einstein’s argument and the idea of science as a human endeavor in his new book, “Never Pure: Historical Studies of Science as if It Was Produced by People with Bodies, Situated in Time, Space, Culture, and Society, and Struggling for Credibility and Authority.”

Appealing to authorities like Einstein might seem ironic in a book aimed at toppling their pedestals, but it is true to Shapin’s purpose. He never suggests we shouldn’t revere the men and women behind big scientific discoveries, only that when we look closely we see that they are people after all.

“Never Pure” is a collection of 15 of Shapin’s essays, most of them published in magazines and journals over more than two decades. The wordy subtitle foreshadows Shapin’s wide-ranging argument; the book is divided into six thematic categories that cover a range of topics from how scientists eat to where they work to the relationship between science and common sense. A word of warning: Because of the variety of their original sources the essays also take a variety of tones, and readers may find themselves bogged down in the more academic pieces.

The first essay lays out both Shapin’s argument and its context. Science and scientists—especially during the 20th century—command an amount of awe and reverence that other academic disciplines do not, both from the laity and from scientists themselves. Some people, including some scientists, have hailed science as a “New Religion,” a description that should make those who profess to a rational search for truth uncomfortable. We have developed mythologies about scientists like Sir Isaac Newton and Einstein, who seem to have operated on a different plane from the rest of us. As we push the bounds of our knowledge outward, science seems capable of touching philosophical truth, the realm of How should we live? or Why are we here?

Scientists do not claim to be able to answer those questions, nor do they purport to be more than mere mortals, as Shapin’s quotations demonstrate. “Never Pure” is about bringing our perception of science in line with reality. He calls it “lowering the tone” of science—letting out some of the air that threatens to carry science beyond the limits of its own power and credibility. He does so by examining scientists such as Robert Boyle, René Descartes, and some of the first researchers in industry in the middle of the 20th century. Science is not impersonal nor is it dogmatic or unified, because it is carried out by people with their own personalities, cultures, relationships, and motivations, Shapin argues. To say otherwise, he suggests, is to deny them their humanity and, perhaps more relevant, to suggest that scientists should deny their own.

Chemists and other scientists owe it to themselves to remember that lesson well. By fleshing out the scientists whom many of us know only for the laws named after them, Shapin shows the degree to which their humanity contributed to the work we remember them for. Robert Hooke, who designed and built experimental apparatuses including vacuum chambers as curator for the Royal Society, is an example and one to whom Shapin devotes a lot of space. Hooke was an ambitious and skilled researcher. But Shapin also portrays him as an underdog at the society, without the social status or wealth of its founding members.

Perhaps because of his underdog status, Hooke was careful to patent—and profit from—his machines. In so doing he blurred the line between “mechanick” and “natural philosopher” or scientist, which made some in the Royal Society uncomfortable. His social status may have also contributed to his meticulousness in acknowledging his assistants in his notebooks, something his mentor and patron, the early chemist Robert Boyle, never did. Maybe Hooke was more conscientious about the debt he owed his inferiors because he was so familiar with the debts he was owed by his betters. Recognizing the human factors that produced the history of modern science helps us see how much our own humanity can and does influence scientific work today.

At times, the depth of Shapin’s research can seem a bit overwhelming. His writing is always clear, but the relevance of his topics to a scientific audience varies. The several essays about 17th-century nutrition, one of Shapin’s interests, become a bit monotonous and may be more academic than the casual reader cares for. The same is true of the essay on proverbs; though interesting, it probably does not have as much relevance to scientists as other essays do.

Shapin also spends considerable time describing—and in part defending—the work and practice of science history and sociology, but there are important lessons to be gleaned there as well. The book’s first three essays, under the heading “Methods and Maxims,” both explain the necessity of those fields and defend their methods against critics, many of whom, Shapin believes, are scientists. Although these essays are not directly about humanizing science, their focus on some of the critiques of science from sociologists and historians—and from scientists themselves —makes them well worth reading. These essays elucidate many of the issues of credibility and perception that can interfere with communicating science effectively to nonscientists. This is an important part of “tone-lowering” that scientists can actively participate in: making themselves and their work more human and more accessible.

In addition to its vital lessons about the humanity of science, “Never Pure” also makes a good primer on the history of science for those interested in learning more about that field. Shapin is equally conscientious about describing trends in the study of the sociology and history of science. Readers should not be daunted by the book’s length: the last 180 of its 568 pages are textual notes and an index.

Though Shapin’s examples are numerous and varied, it is worth remembering that they are not comprehensive. The book’s scope is necessarily limited by his academic interests, primarily science in 17th-century Britain. While there is rich detail about the birth of the Royal Society, little is said about Continental or non-Western scientists. “Never Pure” is a history of a fairly limited time and place in science.

Nonetheless, it is an impressive work and one that scientists will benefit from reading. Shapin reminds us that the great minds of science belonged to people. That is no more a handicap than an advantage, but it is certainly the most important factor in everything scientists do. Neither scientists nor science itself can be separated from the context of peoples’ minds, bodies, cultures, societies. Expectations based on any other understanding are simply unrealistic.