Microbes To The Rescue 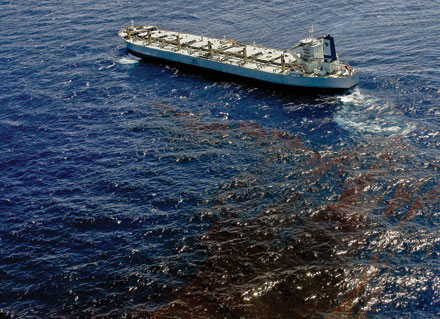 Millions of gallons of oil now drift throughout the Gulf of Mexico in massive underwater plumes. Last week, scientists from the University of South Florida confirmed that this submerged oil came from BP’s leaking well more than 5,000 feet below the ocean’s surface (C&EN, Aug. 2, page 12). Over the past three months, the high pressure at the wellhead has pulverized the oil, and chemical dispersants have broken it into microscopic droplets. Unlike the short lifetimes of surface oil slicks, which physical forces such as evaporation can degrade, the fate of these hovering oil clouds—and by extension the Gulf’s ecological future—lies chiefly with a biological process: the conversion of hydrocarbons into less harmful by-products by marine bacteria.

After the April 20 explosion that sank the Deepwater Horizon exploration rig and started the largest marine oil spill in history, microbiologists converged on the Gulf to investigate the microbial composition throughout its waters and affected coastlines. According to Joel Kostka, a microbial ecologist at Florida State University, Tallahassee, the fundamental goals of this research are to determine the oil’s impact on the Gulf’s microbial ecosystems and to assess how limiting factors, chiefly oxygen concentrations, influence microbial oil degradation. Results may not only tell how fast the Gulf’s ecosystem will recover, Kostka says, but also provide scientists with information to help cleanup crews work efficiently.

Monitoring efforts have focused on drops in dissolved oxygen levels, a sign of microbial metabolism. And preliminary data show that marine microbes have mobilized across the Gulf and are, in fact, chewing their way through the oil plumes.

For example, graduate students working with Andreas Teske, a marine biologist at the University of North Carolina, Chapel Hill, collected water samples from May 26 to June 8 aboard the University of Miami’s research vessel Walton Smith. They found that alkane-digesting bacteria have colonized the Deepwater Horizon oil plumes and have begun to consume significant amounts of dissolved oxygen. According to the Environmental Protection Agency, the average concentration of dissolved oxygen in the Gulf of Mexico is 4 mg/L.

Likewise, David Valentine, a microbial geochemist at the University of California, Santa Barbara, has observed microbe-associated oxygen declines in plumes of oil and methane gas. In these “gassy” plumes located within a 5- to 7-mile radius of the wellhead and at depths greater than 2,500 feet, oxygen levels have dropped by between 5 and 35%, he says. Valentine gathered his samples from June 11 to June 20 while aboard the research vessel Cape Hatteras, operated by the Duke/University of North Carolina Oceanographic Consortium. 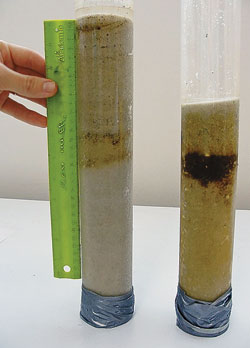 Scientists don’t know yet exactly which bacterial species are present in these plumes. The Gulf has a “leaky” seafloor, populated with natural seeps that discharge between 560,000 to 1.4 million barrels of crude oil every year, according to “Oil in the Sea III,” a 2003 National Research Council report on oil spills. Also hydrocarbons in general are ubiquitous in the ocean and can be found not only in seeping oil but also in plant waxes and lobster shells. Many marine bacteria have evolved to consume these hydrocarbons, and now the spill has allowed these bacteria to follow their food beyond their natural habitat near oil seeps at the bottom of the Gulf.

Teske is culturing bacteria obtained from Deepwater Horizon oil plumes to find out which bacteria are consuming the oil and how fast. He says myriad bacterial species can degrade hydrocarbons, and a few rely on hydrocarbons alone as a carbon source. Also, these oil plumes’ microbial makeup will change over time as different genera degrade the oil’s various fractions, says Markus Huettel, an oceanographer at Florida State. One specialist genus, Alcanivorax, appears on the scene first: It goes from being nearly undetectable in the absence of oil to overtaking all other microbes in oil-treated environments. Alcanivorax metabolizes branched-chain alkanes, which are oil’s lightest fractions. As the alkanes disappear, Alcanivorax’ numbers drop, and then other bacteria take over to finish what’s left. One late-arriving genus, Cycloclasticus, consumes aromatic hydrocarbons, the next-heaviest oil fraction after alkanes. But no known microbes can digest oil’s heaviest fraction, the asphaltenes.

Whatever genera are present, says Joseph Suflita, a microbiologist at the Oklahoma University, Norman, “the most important thing is that oil-degrading bacteria have the oxygen and nutrients they need to do the job.” Oxygen is crucial because without it, anaerobic species, which use sulfate in place of oxygen during respiration, replace aerobic bacteria. These sulfate-dependent bacteria degrade oil more slowly than aerobic microbes can, Florida State’s Kostka says. In laboratory tests performed by his graduate students, aerobic bacteria cultured from spill-impacted beaches along the Gulf Coast cleared oil from water solutions in a day, whereas anaerobes took weeks to achieve the same effect.

Still, UC Santa Barbara’s Valentine says the oxygen reductions he has observed aren’t great enough to block the activity of aerobic microbes. Under these conditions, aerobic bacteria could clear Gulf waters of the oil spill in a couple of years, UNC’s Teske predicts. The use of chemical dispersants—which break the oil up into micrometer-sized droplets—is accelerating that process, he says, because surface-area-to-volume ratios increase with decreasing particle size.

Although microbes may degrade the oil quickly, Valentine points out, their activity could eventually pose risks to the Gulf’s ecosystem, particularly in the deep ocean. A tremendous increase in the amount of oil available for consumption by bacteria that feed on hydrocarbons in the deep Gulf could generate bacterial blooms that eventually die off, leaving behind vast quantities of biomass. Other bacteria would then metabolize this biomass and deplete oxygen to levels low enough to be dangerous for other organisms, Valentine says. The Gulf of Mexico already suffers from an enormous hypoxic dead zone, measuring more than 8,000 sq miles, generated by nutrient-laden runoff from the Mississippi River (see page 9). Valentine’s chief concern is that hypoxia could slow or alter oil metabolism in the dead zone such that oil lingers indefinitely. “We need to monitor oxygen levels very closely,” he says. “And a nagging concern is that they could suddenly plummet. Adult fish that run into [areas of] depleted oxygen can swim the other way, but many other species don’t have that option.”

Teske doesn’t think that oil-spill-related hypoxia will be so dire. “Many people compare oxygen depletion in the oil plumes to the dead zone at the mouth of the Mississippi River,” he says. “But in reality, the two phenomena are quite different. The dead-zone hypoxia is much more severe; it consumes all the oxygen in the water and kills all marine life, while in the Deepwater Horizon plumes, you see much lower declines.” Compared with the almost 35% oxygen drop that Valentine has measured in the Gulf’s oil plumes, oxygen levels drop by about 90% in the Mississippi River dead zone.

So rather than oxygen levels, the long-term impact of oil on ecosystems long after it disappears from the water is what Teske finds more worrisome. That’s because oil’s toxic constituents, such as polycyclic aromatic hydrocarbons, can disrupt reproduction of marine organisms and can lower their offsprings’ vitality.

This chronic toxicity will be magnified along the Gulf Coast’s beaches, salt marshes, and wetlands, because oil degradation in these sites will proceed at a much slower pace than in oxygen-rich environments, experts say. Oxygen levels plummet to near zero in sand deeper than 10 or 15 cm, whereas muddier sediments become hypoxic below just 2 or 3 cm, Florida State’s Huettel says. And oil that hits coastal areas has typically weathered into tar balls, which have low surface-area-to-volume ratios. When waves bury these tar balls under sediments, the conditions present a double whammy: Slow anaerobic bacteria must confront a dense, coagulated product with very stable aromatic carbon bonds that resist digestion. The microbes “just throw up their hands with this stuff,” UNC’s Teske says.

Huettel and Kostka, who collaborate on coastal studies of microbial oil degradation, have recently found tar balls in sediments 50 cm deep in Florida beach sands. “It would take a hurricane to remove them,” Huettel says. Scientists worry that buried oil will release toxic compounds for decades. Researchers have observed a similar time course in Alaska’s Prince William Sound—the scene of the 1989 Exxon Valdez spill—and other coastal areas hit by major spills.

To accelerate oil degradation, some scientists have proposed spraying wetlands with microbial nutrients, such as nitrogen, phosphorus, and iron. But Huettel cautions that such an approach could be problematic because the nutrients also stimulate algal blooms, which can lead to dead zones. Also, Kostka says, use of these microbial “fertilizers” in Prince William Sound produced diminishing returns. At first, the fertilizers accelerated the recovery of beaches, he says, but within five years, differences between treated and untreated beaches were negligible, and eventually the treated sites recovered at a slower rate. “The fertilizers upset the system’s natural ecological balance,” Kostka says. “You have to be very careful; their harms can sometimes outweigh their benefits.” The better approach, he says, is to let science inform the cleanup strategy and help cleanup crews be more proactive. As oil continues to wash ashore from the Gulf’s waters, local environmental managers could strategically deploy booms where oil is more likely to be trapped by hypoxic sediments, he says.

No matter what cleanup techniques crews deploy, UC Santa Barbara’s Valentine predicts the Gulf’s future is a mixed bag. “Microbes will consume the oil in their own way, on their own time frame, with their own requirements,” he says. “And there will always be residual oil that the microbes can’t deal with. It’s going to be a long time before this system fully recovers.”

Pollution
Measuring microplastics in seafood
Persistent Pollutants
US FDA sets voluntary arsenic limit in infant rice cereal
Persistent Pollutants
Goodbye to some PFAS in food packaging
Share X
To send an e-mail to multiple recipients, separate e-mail addresses with a comma, semicolon, or both.
Title: Microbes To The Rescue
Author: Charles Schmidt
Chemical & Engineering News will not share your email address with any other person or company.