The Dream Bar:
[+]Enlarge
Credit: Sarah Everts/C&EN
Weinerei, in Berlin, asks patrons to pay what they want for vino. 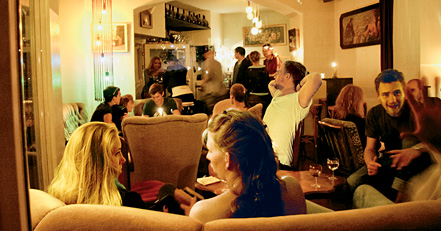 Credit: Sarah Everts/C&EN
Weinerei, in Berlin, asks patrons to pay what they want for vino.

A pay-what-you-want wine bar sounds like a poor student’s dream come true. At Weinerei bar, in Berlin, it’s a reality. Weekend patrons there pay €2.00 (about $2.60) for a glass and then serve themselves from a selection of about eight bottles of vino. At the end of the evening, customers slip the amount of cash they consider fair into a jar sitting near the bar’s exit.

Many people with a basic familiarity of human nature are surprised that this PAY-WHAT-YOU-WANT SYSTEM isn’t horrendously abused. Yet the wine bar hasn’t gone bankrupt in the 10 years of its existence. Sure, there are some freeloaders, but several patrons imbibing at the bar on a recent evening said they don’t rip off the business because the concept is so appealing. It’s also successful: Since Weinerei opened its doors, the owner has started two other pay-what-you-want establishments around the city.

This success doesn’t surprise Uri Gneezy, a behavioral economist at the University of California, San Diego. He’s one of the authors of a recent article in Science that explores how some pay-what-you-want business models work (2010, 329, 325).

In their study, Gneezy and coworkers examined sales of photos taken during amusement park rides. When potential customers were offered a pay-what-you-want option for the pictures, sales volume increased 16 times compared with that generated by a preset price tag. But the fees people voluntarily paid barely kept the photography business afloat.

When customers were told that half of their pay-what-you-want fee would go to charity, however, sales volume increased only 10 times. But in the latter case, in which the pay-what-you-want option was mixed with altruism, clients paid enough so that the owners garnered a tidy profit, even after half of the revenue went to charity.

According to Gneezy, pay-what-you-want business models work when clients are offered a product they have allegiance to or when people believe they are contributing to something important or good. The pay-what-you-want model probably wouldn’t work for something like Microsoft Office, he says, because the company’s software isn’t famous for instilling warm, fuzzy feelings in customers. But the strategy can work with businesses such as the wine bar, where clients have a sense of loyalty to the product or owner, he explains. 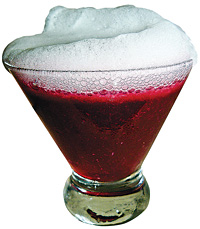 When the Newscripts gang isn’t enjoying red wine in Berlin, it’s possible to find some of us sipping pomegranate margaritas at Oyamel, in Washington, D.C., a restaurant that won our loyalty through molecular gastronomy instead of socialistic payment schemes.

Initially, soy lecithin was Raffa’s emulsifier of choice, but he later turned to a product called Sucro from the Spanish company Texturas. The firm’s website notes that the emulsifier is an ester made from sucrose and fatty acids, and Raffa says he prefers it because it doesn’t impart soy lecithin’s earthy aftertaste to the drink. Whatever the emulsifier is, Newscripts can confirm that the salt air topping is unearthly good.