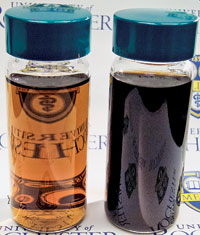 The mechanism of quantum dot formation may not be what people thought, a study reveals (J. Am. Chem. Soc., DOI: 10.1021/ja103805s). A common source of selenium for the synthesis of CdSe or PbSe quantum dots is trioctylphosphine selenide (TOPSe). But when Todd D. Krauss, Christopher M. Evans, and Meagan E. Evans of the University of Rochester combined high-purity TOPSe with Pb(oleate)2, they saw no quantum dot formation. Adding a secondary phosphine to the high-purity TOPSe sped up the reaction rate and caused PbSe quantum dots to form. In addition, TOPSe derived from commercial-grade trioctylphosphine typically used for quantum dot syntheses contains dioctylphosphine selenide as an impurity, which immediately disappears upon combination with a metal carboxylate. The Rochester team suggests that the secondary phosphine may be the actual reactive species in TOPSe, whereas TOPSe itself serves only as a soluble source of selenium that is capable of selenium exchange with more reactive species. The researchers believe their results explain the irreproducibility and poor yields for conventional quantum dot syntheses.

Ionic Liquids
Chemistry in Pictures: Papa’s got a brand new solvent
Materials
Fluorescent materials are the brightest ever made
Biomaterials
Fruit’s metallic blue caused by lipid nanostructures
Share X
To send an e-mail to multiple recipients, separate e-mail addresses with a comma, semicolon, or both.
Title: Quantum Dot Mystery Resolved
Author: Celia Henry Arnaud
Chemical & Engineering News will not share your email address with any other person or company.