Science & Education At The Smithsonian 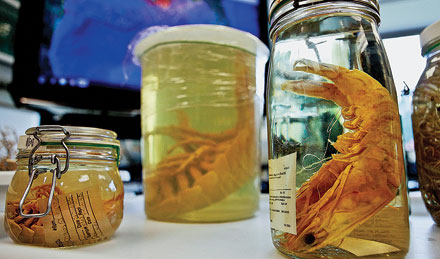 Officials from the Smithsonian Institution were called before Congress in late July to testify about its science and education programs. The hearing was friendly, unlike hearings in the past when the institution was defending itself from scandal.

“Most people do not know that the Smithsonian Institution receives nearly $800 million a year in federal appropriations, or that over $200 million of that goes toward basic scientific research and dedicated Smithsonian research facilities,” Rep. Daniel W. Lipinski (D-Ill.), who is chairman of the Science & Technology Committee’s subcommittee on research and science education, said at the start of the subcommittee’s July 21 hearing. “I’m looking forward to learning what goes on behind the scenes at their 19 museums and nine research centers, and how they share expertise with the 168 affiliated museums from around the country.”

“Hearing from the world’s largest museum and research complex seems wise as we determine how to manage our diverse federal efforts in science, education, and research,” noted Rep. Vernon J. Ehlers (R-Mich.), the subcommittee’s ranking member, who is himself a scientist.

The Smithsonian officials did not disappoint. Led by Secretary G. Wayne Clough, former president of Georgia Institute of Technology, they gave members a little show-and-tell from the Smithsonian’s vast collections, they talked about the Smithsonian’s highly respected research centers that explore everything from the ocean depths to the far reaches of the universe, and they mapped out a new vision for how the Smithsonian will broaden its outreach and educational efforts in the digital age.

Clough showcased several preserved specimens from the Gulf of Mexico that are in Smithsonian collections. He explained, in layman’s terms, how these collections are aiding oil-spill relief workers in the Gulf as they have scrambled to save marine organisms from the oil gushing from the ocean floor. Collections such as these, he said, provide a baseline for understanding what organisms inhabit a given region, what healthy specimens should look like, and what steps might be taken for their protection.

He painted a picture of the work of Smithsonian scientists. “Every day, in every corner of the globe, Smithsonian science examines some of the world’s most complex, and time-sensitive, problems,” Clough said. “Whether they are protecting ecosystems that are threatened, assessing the consequences of climate change, or keeping aircraft safe from bird strikes, Smithsonian scientists apply what they learn to improve the quality—and quantity—of life on Earth.”

Claudine K. Brown, the Smithsonian’s director of education, told subcommittee members about such programs as the National Science Resources Center, which is committed to the goal of scientific literacy for learners of all ages. The Smithsonian, she continued, also has education efforts under way at many of its museums and research bureaus such as the Harvard-Smithsonian Center for Astrophysics and the Smithsonian Environmental Research Center on the Eastern Shore of the Chesapeake Bay.

Smithsonian Tropical Research Institute Director Eldredge Bermingham noted that education is a central focus at his research bureau, where “we host more than 1,000 visiting undergraduate, graduate, and postdoctoral researchers. Our approach is to partner outstanding scientists with outstanding young scholars.”

It was nice to see the Smithsonian testifying before Congress on a positive footing this time. Just a few years ago, Smithsonian officials were being hauled before Congress to explain high salaries for and profligate spending by top administrators when the rest of the institution was coping with severe budget constraints.

Former secretary Lawrence M. Small was pursuing a fund-raising strategy in which high living at the top was meant to attract major donations from corporations and wealthy individuals. To Small’s credit, he did bring in some of the Smithsonian’s biggest donations in history, but the fallout from his tactics was a public-relations disaster.

The institution may not have found itself in such a dire predicament if Congress had heeded earlier warnings—stretching back nearly two decades—and provided the Smithsonian with adequate federal funding. For some time now, the Smithsonian has simply not had enough money both to operate and maintain its museums and to carry out its core missions in research and education.

The funding cited by Lipinski during last month’s hearing is a fraction of the billions of dollars that flow each year to other science agencies such as the National Science Foundation, National Institutes of Health, and Department of Energy. Given that the Smithsonian’s research is vital to national interests, its activities foster international goodwill, and its positive reputation and renown benefit the general public, the Smithsonian deserves far more from the federal government than it currently receives.

I would bet that more than a few people have been inspired or encouraged to pursue careers in science simply by wandering the Smithsonian’s vast halls and seeing the treasure trove of natural wonders on display. After hearing about the institution’s efforts in research and science education and the vitality of its museums, members of Congress, I hope, will take the next step and fight for the kind of funding that will keep the Smithsonian viable for many years to come.