Silicon And Carbon Try To Triple Up 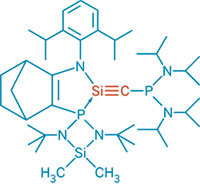 Chemists have designed a rigid molecular framework that houses the first putative silicon-carbon triple bond (a silyne) observed in an isolable compound (Angew. Chem. Int. Ed., DOI: 10.1002/anie.201003616). Carbon-carbon triple bonds (alkynes) are ubiquitous in chemistry, whereas silicon-silicon triple bonds (disilynes) are extremely rare. Instead of falling somewhere in-between, silynes are rarer still, having only been glimpsed in the gas phase by mass spectrometry before now. Antoine Baceiredo and Tsuyoshi Kato of the University of Toulouse, in France, and colleagues made the silyne shown by treating a chlorosilyl-phosphine complex with a lithiated phosphinodiazomethane. Stabilizing the silyne to prevent isomerization required low temperature and a little trickery. The nitrogen and phosphorus atoms bear bulky alkyl groups that limit the number of substituents that can fit around the silicon-carbon core, encouraging multiple bonding. And a weak bonding interaction between silicon and a lone pair of electrons on a phosphorus atom adds stability. The compound has a very short Si–C bond (1.667 Å), consistent with expected values for a silyne. However, the calculated bond order of 1.687 is much less than the theoretical value of 3.0 for a triple bond, indicating less bonding and more lone-pair character for silicon and carbon, reminiscent of a carbene, the researchers say.

Reagents
Food additive enables fast synthesis in water
Synthesis
Chemistry in Pictures: Sea flower
Synthesis
Chemistry in Pictures: Golden globe
Share X
To send an e-mail to multiple recipients, separate e-mail addresses with a comma, semicolon, or both.
Title: Silicon And Carbon Try To Triple Up
Author: Stephen K. Ritter
Chemical & Engineering News will not share your email address with any other person or company.