Exploring the ways people perceive risk and how they act accordingly

by George B. Kauffman 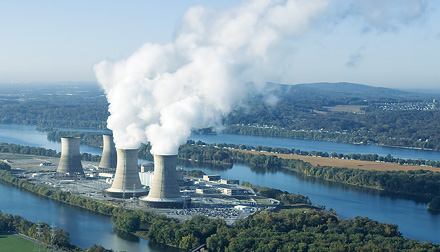 For those confused about the risks to life and limb trumpeted by media, politicians, governments, and marketers, “How Risky Is It Really? Why Our Fears Don’t Always Match the Facts”

is really a guide for the perplexed. Author David Ropeik, an instructor in Harvard University’s Continuing Education Program who taught risk perception and risk communication at the Harvard School of Public Health, is a former award-winning television reporter in Boston and the coauthor of “Risk: A Practical Guide for Deciding What’s Really Safe and What’s Really Dangerous in the World Around You.”

In his new book, Ropeik argues that the widely accepted dichotomy between emotion and reason is a false, overly simplistic one. We are neither completely emotional nor perfectly rational in our perception of and response to risk: We are both, all the time. How we respond to risk, he writes, is an inextricable mixture of two factors—an emotional, largely subconscious, instinctive reaction triggered by the brain’s amygdala, and a deliberative cognitive response generated in the brain’s cortex, which consciously reasons and rationally analyzes the facts. The first response is quicker, stronger, and fearful, and it triggers the so-called triple F response—fight, flight, or freeze. Sometimes we are more afraid of relatively smaller threats or less afraid of relatively big ones. Ropeik maintains that this “perception gap” can be dangerous. He proposes ways to apply an understanding of where our fears come from, so that we can narrow the perception gap and make healthier choices for ourselves, our families, and society.

HOW RISKY IS IT, REALLY? Why Our Fears Don’t Always Match the Facts,
[+]Enlarge 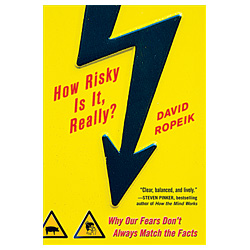 Ropeik describes some of the mental shortcuts that we have evolved to make decisions when we don’t have all the information we need, all the time we need to get this information, or all the intelligence to understand it. Our relatively primitive amygdala has not yet evolved enough to recognize and deal with modern risks, and it fires up before our rational cortex can contribute its reasoned input. The psychological characteristics of potentially risky circumstances make them feel more or less scary, the scientific evidence notwithstanding. Social and cultural factors also influence our risk perception. Ropeik offers evidence of the harm that can arise from the perception gap and suggests ways to narrow that gap in the choices that we make both as individuals and as a society.

We are living in both the safest and the scariest of times. Although science and technology have made tremendous advances against diseases and enormously lengthened our life expectancy, they have enabled partisan groups and sectors with antiprogressive and antiscience agendas to spread fear and hysteria about purported risks. Ropeik posits a variety of perception factors.

One of these factors that should interest scientists in general and chemists in particular is that natural risks are perceived as less scary than man-made ones regardless of the facts. According to Ropeik, Greenpeace worries about genetic engineering because “it enables scientists to create plants, animals, and micro-organisms by manipulating genes in a way that does not occur naturally.” And consider the case of aflatoxin, a naturally occurring fungus that grows on peanuts. It is among the most carcinogenic substances known and far more dangerous than the man-made pesticides that worry so many people.

Similarly, those who use fear of the carcinogenic effects of radiation from the accidents at Three Mile Island or Chernobyl to advocate against nuclear power fail to have their houses tested for radon. This naturally occurring radioactive gas, common in our homes, is known to cause lung cancer. They also ignore the fact that curtailing the contribution of nuclear energy to our energy supply means that burning coal, oil, and gas produces massive amounts of carbon dioxide that contributes to climate change. As of 2008, there have been fewer than 100 radiation-related deaths caused by Chernobyl since 1986, while about 79,000 people in the U.S. have died from fine-particle pollution from fossil-fuel-burning power plants.

Ropeik uses this and other risk perception factors to analyze in painstaking detail, and with numerical data, dozens of scares that have been in the public spotlight. Many of these scares have faded from public consciousness, such as the 2001 anthrax letters; the 2002 Washington, D.C., sniper case; the outbreak and identification of severe acute respiratory syndrome in 2002; and fears about weapons of mass destruction.

The U.S. has a long history of people or groups using fear for public policy ends, Ropeik writes. During the 1950s, the right-wing John Birch Society opposed the fluoridation of drinking water as a Communist plot, and today some environmental groups oppose it because they maintain that fluoride is a potential carcinogen. Some people argue that too much remains unknown about its effects on health, and it doesn’t help that fluoride is a product of the generally distrusted chemical industry. Nevertheless, fluoridated drinking water is one of the greatest public health advances of the 20th century, having reduced cavities in children by 20–40%. Similarly, bisphenol A, another controversial substance, is not natural, is a product of the chemical industry, and is undetectable by the senses. The Food & Drug Administration and the European Food Safety Agency have analyzed hundreds of experiments and have concluded that BPA in plastic bottles and food can linings is not a risk to humans, yet activists are still trying to have it banned. Actually, natural soy is far more estrogenic than BPA.

WHAT IS NANOTECHNOLOGY AND WHY DOES IT MATTER? From Science to Ethics by, Fritz Allhoff, Patrick Lin, and Daniel Moore, Wiley-Blackwell, 2010, 304 pages, $99.95 hardcover (ISBN: 978-1-4051-7545-6)
The book enables an understanding of this important emerging technology and the social and ethical issues that come from it. Designed for students in ethics and technology, it is also a resource for policymakers, scientists, and industry executives.

DUST: The Inside Story of Its Role in the September 11th Aftermath by, Paul J. Lioy, Rowman & Littlefield, 2010, 180 pages, $34.95 cloth (ISBN: 978-1-4422-0148-4)
The author shares his personal and professional perspectives on the World Trade Center dust. The book attempts to answer many questions about the environmental effects, public policy initiatives, health outcomes, and scientific findings that played a critical role in the aftermath of Sept. 11, 2001.

The perception gap, Ropeik writes, can lead to risky personal behavior. In the three months after the Sept. 11, 2001, terrorist attacks, so many people were afraid of flying that motor vehicle deaths rose significantly. Statistics show that flying is safer than driving. However, driving feels safer because it offers us a sense of control.

The perception gap, Ropeik continues, can lead us to demand that the government spend money and resources to protect us from things that feel frightening but which are not the greatest risks. For example, our government spends much more on cancer research than on heart disease, which kills 20–25% more people and is the leading cause of death, both in the U.S. and in most of the developed world.

The news media play a crucial role in the way that we see the world and perceive risk. As a member of the Fourth Estate, Ropeik admits to having played up the dramatic aspects of news stories, but he explains that because of the profit motive news has to attract attention, especially in view of the 24/7 competition. Reporters and editors are people, but what scares you or me excites journalists. News is simplistic because of space and time limitations. However, the media are not always unduly negative but sometimes are positive and hopeful.

Ropeik maintains that businesspeople, political conservatives, regulators, scientists, engineers, and many academics blame too much emotion and lack of reasoning for people’s irrational choices. On the other hand, environmental activists, consumer advocates, social activists, and political liberals argue that too much cold rationality in decision-making ignores our values and feelings. Ropeik argues that both views are right and wrong: “Arguing over how people should perceive risk is really just a surrogate for an underlying clash of cultural worldviews that makes conflict over risk issues more intense and blocks progress.”

Ropeik hopes that by “describing some of the intrinsic ways in which we gauge the hazards we face, not prescribing what we ought to think about this risk or that, this book can help you understand yourself a little better, keep your fears in perspective a little better, narrow the perception gap a bit, and make healthier choices for yourself and your family, and that we can start to come up with wiser solutions to some of the really big problems we face in society.”

This absorbing, insightful, and controversial but meticulously documented book proposes practical ideas for evaluating holistically the risks posed by alarmist, sensationalized stories in the media. It will not please extreme true believers and doomsayers of the right or the left, especially those who spin and manipulate information to promulgate a partisan point of view. For people like me—whose goal is to deal more skeptically with the scare story du jour; to become a skeptical and better-informed consumer of news; and to empower myself to make, if not perfect choices, at least more reasonable, more beneficial ones—it’s a godsend. It’s already challenged or changed my thinking on a number of issues. Read it. And remember, worrying too much about a risk creates stress, which is risky and a real killer itself.

Pollution
Mercury makes it deep into marine trenches
Sustainability
US Senate passes sustainable chemistry legislation
Environment
P2 and ADM pair up for renewable products
Share X
To send an e-mail to multiple recipients, separate e-mail addresses with a comma, semicolon, or both.
Title: Navigating A Risky World
Author: George B. Kauffman
Chemical & Engineering News will not share your email address with any other person or company.