Astrochemistry: Lunar impactor may have struck a site of previous comet impacts 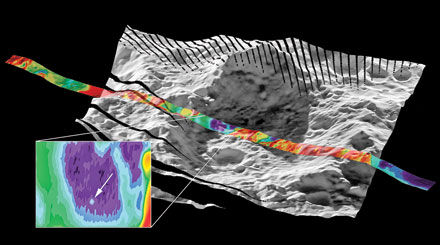 For the first time, scientists have directly examined the contents of an icy lunar crater, showing that the surface contains a remarkably high percentage of water, much of which is in the form of pure ice crystals, possibly deposited by a comet.

The debris kicked up from a lunar crater bombarded by the upper-stage rocket of NASA's LCROSS spacecraft last year was loaded with water and other volatile chemical species, which represent 10–20% of the total material, the scientists announced on Oct. 21.

The water, which alone made up a "remarkable" 5% of the ejected material, was largely in the form of pure ice grains, rather than mixed, "dirty" grains, says Anthony Colaprete, LCROSS mission project scientist at NASA's Ames Research Center, in Moffett Field, Calif. "That's really exciting," he says, because he and his colleagues didn't expect lunar ice to be so pure.

The team also detected a plethora of other species in the ejected material, including methane, ammonia, CO2, SO2, simple hydrocarbons, and atoms such as mercury, sodium, and calcium.

Hydrogen Burst
Credit: NASA/UCLA
This simulation from an instrument on the LRO shows the time evolution of the molecular hydrogen cloud released by the LCROSS impact.

The scientists suspect that relatively recent comet impacts may be the source of the large amount of extremely pure ice at the site—a permanently shadowed crater named Cabeus, near the moon's south pole. If the water were indigenous to the moon, they reasoned, it would likely be much older and muddier. The results also illustrate how nonuniform the moon's surface composition is, Colaprete says, and will help scientists decide where to send future impact or lander spacecraft.

This relatively recent deposit of water to the moon's surface, compared with more ancient water bound to minerals deep inside the moon, will carry with it "a very interesting record of how it's arriving," G. Jeffrey Taylor, a lunar geologist at the University of Hawaii, Honolulu, tells C&EN. Taylor also notes that such quantities of water, even if found only in polar craters, would be an ample resource for future moon colonization. "It's a huge amount," he says.

The LCROSS spacecraft monitored the October 2009 impact before plunging to its own death on the moon's surface soon after. In addition, the Lunar Reconnaissance Orbiter (LRO), which is still orbiting the moon, recorded the event in detail. Instruments on the spacecraft captured data from the thermal, infrared, visible, and ultraviolet regions of the spectrum.

In contrast to the bone-dry picture of the moon revealed by the Apollo missions, the moon does harbor some water, scientists have learned in recent years. In the 1990s, NASA's orbiting Lunar Prospector spacecraft detected large concentrations of hydrogen at the lunar poles. Last year, three separate spacecraft detected spectral evidence for water (C&EN, Sept. 28, 2009, page 9).

The LCROSS mission team announced last year that they had seen evidence for water, and now they and the LRO teams are reporting their detailed analyses of the impact (Science 2010, 330 463, 468, 472, 477, 479, 483). Among other findings, they have quantified the amount of water kicked up in the spacecraft's field of view: 155 kg, which is higher than the original 100-kg estimate.

In addition, the scientists found that the surface of the crater is fluffy "almost fairy castle like," Colaprete says. Underneath the fluff is a more solid surface.

But it's the chemistry that will reveal the most about the nature of the crater. One thing "that's really fascinating" is that the concentration of the various species in relation to total water shows "evidence for ongoing chemistry in the cold traps," Colaprete tells C&EN.

Such chemistry usually occurs on cold interstellar grains, enabled by radiation energy from stars or micrometeorites. That type of chemistry is occurring in the crater, Colaprete says.