I grow many plants in my garden and under lights in my basement during the winter. Those I grow tend to be colorful, like bougainvilleas, and some are both colorful and sweet-smelling, like the climbing pink rose named Zephirine Drouhin.

Although I sometimes like to fool myself into thinking the blooms and sweet odors are all for me, I know that most flowers are just looking to have a good time with their pollinators. Those bright colors, tasty nectars, evocative odors, and even the flowers’ shapes are a “come hither” to a variety of pollinators such as bees, wasps, and hummingbirds.

And then there are flowers that work their wiles in a way that some of us might consider socially unacceptable. Take, for instance, Arum palestinum, also known as Solomon’s lily. It attracts its lovers, members of the Drosophila species commonly referred to as fruit flies, with the stink of ROTTING FRUIT.

So far, so good if you are a fruit fly. But the violet-black flowering lily deceives its unsuspecting lovers with the sickly sweet smell. Instead of finding dinner in the flower, the flies are tricked into pollination, getting kidnapped overnight and released without so much as a morsel to eat the next morning.

To drosophilids, a happy meal is a yeasty meal. According to a team led by Marcus C. Stensmyr of the Max Planck Institute for Chemical Ecology, in Germany, Solomon’s lily succeeds in attracting the flies through a chemical sleight of hand (Curr. Biol., DOI: 10.1016/j.cub.2010.09.033). By emitting odor molecules that resemble those produced by yeast during the alcoholic fermentation of rotting fruit, the flower attracts an average of 140 flies from eight different Drosophila species when in bloom, including the well-known laboratory workhorse and kitchen nuisance Drosophila melanogaster.

To accomplish this deception, Solomon’s lily produces a number of chemicals. Two compounds, 2,3-butanediol monoacetate and acetoin acetate, are not typical of other flowering plants. “These molecules are not contained in the bouquets of flowering plants but are characteristic of vinegar and wine,” Stensmyr explains.

Initially, I thought that I might grow a lily or two of my own and capture the occasional fruit flies that buzz around the kitchen and make the house cats crazy. However, Stensmyr cautions that Solomon’s lily blooms only once per year and only for a short time. So instead, maybe I’ll try a Venus flytrap, Dionaea muscipula; it lasts longer and isn’t particular about fly species.

I have thought of growing coffee beans, too, but never for the purpose intended by scientists from Cornell University, the University of Chicago, and iRobot Corp. Using ground coffee and a latex party balloon, the group recently created a fingerless helping hand (Proc. Natl. Acad. Sci. USA, DOI: 10.1073/pnas.1003250107).

Getting a grip:
[+]Enlarge
Credit: John Amend/Cornell University
Coffee grounds do the trick. 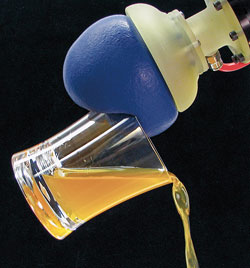 Filled with coffee grounds—any variety will do—and attached to a ROBOTIC ARM, the balloon presses down and deforms around a desired object. Sucking the air out of the balloon solidifies the grip.

Hod Lipson, an associate professor of mechanical engineering at Cornell, says, “The ground coffee grains are like lots of small gears. When they are not pressed together, they can roll over each other and flow.” However, when the vacuum forces the grains together, “the teeth interlock, and they become solid,” he adds.

The gripper almost works like a fresh cup of coffee in the morning: It starts out smooth and then puts the world into focus with a jolt.

The Defense Advanced Research Projects Agency funded research on the gripper, which could be adapted to defuse explosives, move dangerous objects, or function as a prosthetic limb.