WHAT LIES BETWEEN?
[+]Enlarge
Credit: NASA
A field of galaxies captured by the Hubble Space Telescope. 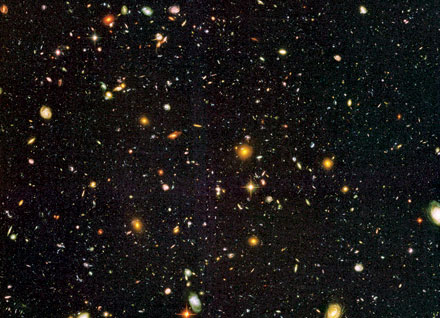 Credit: NASA
A field of galaxies captured by the Hubble Space Telescope.

In 1919, Mary Lea Heger, an astronomy graduate student at the Lick Observatory in the Santa Cruz Mountains, found a strange pair of lines in the absorption spectrum of a star she was studying. The lines were broad, not spiky like the lines from elements, and the chemical species responsible for them was unknown.

Although Heger soon left science to raise a family, her discovery remains one of astronomy’s great unsolved mysteries. The lines clearly come from molecules in the interstellar medium. Over the ensuing decades more than 200 of these broad lines have been discovered in the visible and infrared regions of the spectrum. As a group they’ve been given the name “diffuse interstellar bands,” or DIBs. But for all of the modern spectroscopic and astronomical tools at scientists’ disposal, not a single molecule responsible for these bands has ever been identified.

Now, astronomers and physical chemists say they may have finally caught a fish in the DIB sea. The molecule is a small linear species with a complex spectrum: H2C=C=C, or propadienylidene. In a paper to be published in Astrophysical Journal, physical chemistry professor John P. Maier at the University of Basel, in Switzerland, and colleagues at the University of Victoria and the National Research Council of Canada, in British Columbia, laboriously perfected laboratory techniques for obtaining gas-phase spectra of the molecule and matched the results to two lines in DIBs.

Astrochemists are avidly interested in the molecules that cause DIBs, given that they may make up the largest cache of organic material in the universe. “If we finally have a foothold in the class of compounds that comprise DIBs, that gives us a direction to pursue,” says Robert J. McMahon, chemistry professor at the University of Wisconsin, Madison. “It would help us understand the chemistry of our physical universe.”

The report has the astrochemistry community hopeful, but wary—they’ve pinned their hopes on other promising potential molecular candidates in the past, such as the linear carbon chain C7 anion, only to later have them discounted by improved laboratory and spectroscopy methods.

“I think that Maier’s finding is exciting, and I’m cautiously optimistic about it,” says John F. Stanton, theoretical chemistry professor at the University of Texas, Austin. “This, of course, is not the first time that a DIBs carrier has been put forward, but it is one of the most carefully put-forward proposals to date.”

Of course, many different molecules have been discovered in space. The majority of those have been found in dense molecular clouds, where gas molecules and dust particles cluster so closely that starlight can’t penetrate them. The molecules are identified by rotational spectra that reflect their bumping and jostling.

The sources of DIBs, however, are what are known as diffuse interstellar clouds. These clouds are so sparsely populated with gas-phase molecules that they appear invisible, but they are ubiquitous in the universe. Their presence is inferred from how they absorb light from stars behind them. Spectra of simple species such as H2 and C3 have been discovered in these diffuse molecular clouds through use of radio telescopes, but those spectra aren’t related to the absorption spectra of DIBs.

In recent decades, scientists proposed that carbon-based molecules, in particular, carbon chains, could be responsible for DIBs. Another strong contender is the large class of polycyclic aromatic hydrocarbons.

To be verified, spectra of substances in space must be compared with those obtained in a lab, which is astrochemistry’s primary bottleneck. Not only are techniques for obtaining gas-phase spectra difficult, but chemists must also pick and choose which molecules seem to be promising candidates, and they depend partly on luck to stumble upon one that actually does exist in space.

“The whole subject is a very treacherous one,” notes Patrick Thaddeus, an applied astronomy and applied physics professor at Harvard University.

Scientists have had their eye on H2C3 for years, as it had been identified in dense molecular clouds by its radio spectrum. Additionally, “one could imagine an interstellar synthesis of this species from other molecules that have been observed in diffuse interstellar clouds,” notes Benjamin J. McCall of the University of Illinois, Urbana-Champaign.

However, an absorption spectrum for the molecule in the visible region of the spectrum—in which DIBs lie—wasn’t known. About 10 years ago, McMahon and Stanton helped lay the foundation for Maier’s current work by obtaining and interpreting the electronic absorption spectrum of H2C3 in a neon matrix.

Maier’s group has developed techniques for improving the accuracy of gas-phase spectra. Frequently, scientists produce molecules in a plasma discharge, and “you have goulash soup,” Maier says. His lab simplifies the picture by first producing species in a mass spectrometer and then isolating them and obtaining their spectra.

Takeshi Oka, an emeritus professor of chemistry and astronomy and astrophysics at the University of Chicago, is preparing with McCall a commentary on Maier’s paper, to be published in an upcoming issue of Science. He is skeptical of the discovery, noting that the signal for H2C3 absorption is very intense when looking at a cloud that’s relatively poorly populated with carbon, yet a carbon-rich cloud shows a relatively weak signal for H2C3.

Theodore P. Snow, an astrophysics and astronomy professor at the University of Colorado, Boulder, agrees. “You’d think that H2C3 [absorption] should be strong [in carbon-rich clouds] too,” Snow tells C&EN. “But it’s not.”

“John’s paper deserves to get out and let people think about it,” Thaddeus adds. “The best people in the field will be giving it great attention.”