by Stuart A. Borman

CUTTING TOOL
[+]Enlarge
Credit: © 2010 Sigma-Aldrich
Sigma-Aldrich markets zinc finger nucleases (ZFNs) designed to edit DNA. ZFNs combine zinc fingers (gray, zinc atoms are spheres) that recognize a three-base-pair DNA sequence with a domain (triangle) from the restriction endonuclease FokI, which cleaves DNA (in the red area). The break is then repaired to modify the sequence or create a gene knockout. A, C, G, and T are DNA bases, and C and N are protein termini.

Credit: © 2010 Sigma-Aldrich
Sigma-Aldrich markets zinc finger nucleases (ZFNs) designed to edit DNA. ZFNs combine zinc fingers (gray, zinc atoms are spheres) that recognize a three-base-pair DNA sequence with a domain (triangle) from the restriction endonuclease FokI, which cleaves DNA (in the red area). The break is then repaired to modify the sequence or create a gene knockout. A, C, G, and T are DNA bases, and C and N are protein termini.

In 2000, Yen Choo, Chemistry Nobel Laureate Aaron Klug, and coworkers at the MRC Laboratory of Molecular Biology, in Cambridge, England, developed "zinc fingers"—zinc-coordinated protein-based binding agents—that regulate gene transcription by targeting just about any 18-base-pair DNA sequence. The team announced that the technology was being developed by the London-based start-up Gendaq. 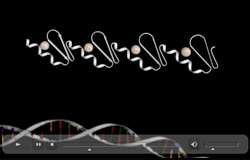 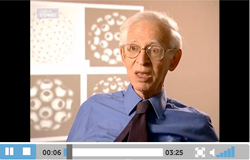 Gendaq "did pretty well for itself," says Choo, who is now chief executive officer of the London-based stem cell biotech firm Plasticell. Gendaq made good scientific progress and was sold in 2001 to Sangamo BioSciences for $30 million, Choo notes. Sangamo later licensed research applications of customizable zinc finger technology to Sigma-Aldrich, which now markets it commercially under the trade name CompoZr (C&EN, April 5, page 20).

Researchers now use zinc finger technology to make a variety of genetic modifications—inserting a piece of DNA in a defined place in the genome, creating point mutations in a specific gene, or correcting a gene's sequence defect. "You can knock stuff in, knock stuff out, or change it," Choo says. "Zinc fingers act very specifically to target the particular sequence you're interested in—by virtue of the inherent specificity of zinc fingers and, in particular, of the engineering system that we developed."

Zinc fingers aren't yet being used in any approved therapies, but Choo notes that the opportunities are there for it to happen soon. For example, Sangamo is currently using zinc finger nucleases in three Phase I clinical trials to knock out the gene coding for HIV-entry receptors on patient immune-system stem cells. The idea is to reintroduce the modified cells to the patient in hopes that the cells will form a new population of HIV-resistant immune cells. Sangamo has also completed four Phase II clinical trials of a zinc finger therapeutic in diabetic neuropathy.

Neuroscience
Novartis and Sangamo partner on zinc finger therapies for autism and intellectual disability
Business
Editas and Allergan kick off first in vivo CRISPR gene-editing clinical trial
Start-ups
Encoded Therapeutics launches with $104 million
Share X
To send an e-mail to multiple recipients, separate e-mail addresses with a comma, semicolon, or both.
Title: Targeting Genes With 'Zinc Fingers'
Author: Stuart A. Borman
Chemical & Engineering News will not share your email address with any other person or company.