Scientist-storyteller draws career and outreach lessons from Marie Curie’s life, and her own 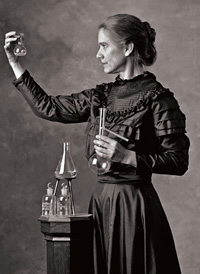 Susan Marie Frontczak took the stage on a rainy Philadelphia Wednesday, but no one noticed. The audience at the Chemical Heritage Foundation didn’t see the girl who grew up outside Detroit, who studied hard and ended up designing integrated circuits for Hewlett-Packard. No, they were too swept up in the persona Frontczak had assumed—that of famed chemist Madame Marie Skłodowska Curie.

In a buttoned-to-the-hilt black dress, wisps of gray hair peeking out from a pulled-back bun, Curie tells her story nervously at first, her fingers fidgeting. But soon enough, she warms to the audience, coming alive as she describes her pioneering research on radioactivity. “It is this work which has brought me the most meaning and pleasure,” Curie says with halting, Polish-accented English.

It’s something Frontczak might say about her own work as a storyteller. For years, she’d been the engineer who dabbled in the arts—a community theater performance here, a paid storytelling gig there. Then one day she decided she was ready for something different. She took a one-year leave of absence from HP to try storytelling full time. She says her coworkers called her brave, at first. But with a little prodding, she got them to tell her what they really thought.

“It was one of two things,” Frontczak recalls. Half thought she’d never make enough money to live on, and the other half figured she’d tire of her hobby once she had to do it full time. “They were convinced that by the end of the year I’d be running back to HP with my tail between my legs begging for a job,” she recalls.

“They had already decided what my outcome would be,” she continues. But Frontczak had to discover her future for herself, and that’s why she took leave—the experiment, as she calls it. That year’s leave of absence has since stretched into a 17-year hiatus, and counting.

The economy has left many capable people unemployed and there’s no easy fix for that, Frontczak notes. Still, for frustrated chemists looking to develop a passion into a new career, she has words of advice: “Start. Start now,” even if it feels like you’re already too busy.

“Develop your interests. Be curious. Try things,” Frontczak adds. “Not all my experiments have turned out the way I would have wished,” she says. “That’s okay. They have all been worthwhile.”

Her income as a storyteller has never matched her engineering salary, but she harbors no regrets. “I live simply, and I have a lovely life—this work keeps growing and changing with me.”

Becoming Curie was one of those changes. Curie had been with Frontczak since childhood, first in kid-friendly biographies, later as a scientific role model who shared her Polish heritage. But Curie wasn’t part of Frontczak’s early repertoire. It took about five years of full-time storytelling before Curie made the list. Frontczak also performs living histories of First Lady Eleanor Roosevelt and other luminaries.

Frontczak wrote the Curie living history script after extensive research on Curie’s life. Her show portrays Curie as she was in 1915, already a two-time Nobel Prize winner. The 1915 Curie tells her life story to her audience, from her childhood in Russian-held Poland, where she was born Maria Skłodowska; to her studies at the Sorbonne; her romance with her husband, Pierre; and her painstaking quest to isolate radium.

It’s that science that ends the storytelling portion of the performance in dramatic fashion. The houselights go down on a triumphant Curie, holding aloft a tiny sample of glowing material—“stage radium,” Frontczak explains—in a test tube. The only light left in the room, a faint blue glow, emanates from the sample, holding every eye in its thrall.

Then Frontczak takes questions from the audience as Curie and steps out of character to take more general queries. It’s a rare performance when she’s able to respond to every raised hand.

Frontczak figures the public would learn more about chemistry, and perhaps leave behind negative stereotypes, if chemists got out of their labs and talked to lay audiences a little more often. “Why do people get so excited about chemistry when Marie Curie tells them her story?” she asks. “It’s because Marie Curie was passionate about her work.”

Curie herself overcame profound shyness to enter the public sphere, Frontczak explains. She was loath to leave the lab—onstage as Curie, Frontczak snaps, “I tell the reporters I am interested in things, not people.” But raising funds for the Red Cross’s mobile X-ray units during World War I proved powerful motivation for Curie to speak to the public, the media, and government officials, Frontczak says.

“When she gets talking about what she discovered, how many hours would disappear as she figured this stuff out, her love of the subject infects the audience,” Frontczak says. Chemists should take a page from that passion and tell more nonscientists about what they do and why they’re excited to go to work in the morning, Frontczak says. “That will have a more positive effect on the world’s impression of chemistry than any ads or propaganda.”

Physical Chemistry
PBS Docudrama Brings Discovery Of The Chemical Elements To Life
People
James T. Grady-James H. Stack Award For Interpreting Chemistry For The Public
Biological Chemistry
Perpetuating A Stereotype
Share X
To send an e-mail to multiple recipients, separate e-mail addresses with a comma, semicolon, or both.
Title: Susan Marie Frontczak
Author: Carmen Drahl
Chemical & Engineering News will not share your email address with any other person or company.