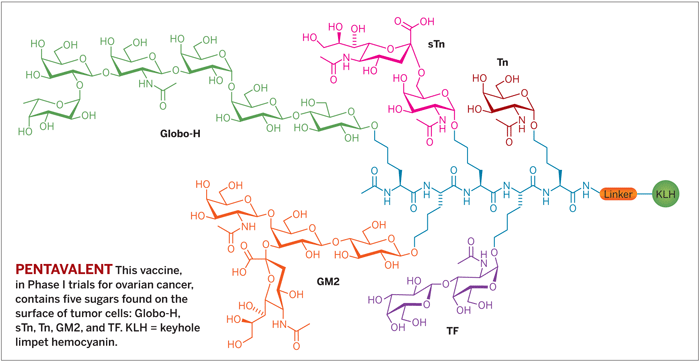 Carbohydrate-based vaccines are widely used to prevent infectious diseases, but their use to fight cancer has so far proved problematic. To increase the chance of success, researchers are pursuing a number of avenues that have a common goal: enhance carbohydrates’ ability to induce the human immune system to mount an effective fight against cancer.

Carbohydrates are studded all over the surfaces of human cells, where they help with essential functions ranging from protein transport and cell-cell recognition to signal transduction and cell adhesion. Those on cancer cells are different from those on normal cells, making it possible to distinguish the cancerous ones. Researchers hope to use carbohydrate vaccines to get the immune system to attack and kill cancer cells while leaving normal cells alone.

Unfortunately for vaccine designers, the immune system doesn’t pay a lot of attention to cell-surface carbohydrates, normal or not.

“If you vaccinate someone with a carbohydrate tumor antigen, you’re not likely to get much immune response at all,” says glycopeptide vaccine specialist Steven J. Sucheck of the University of Toledo. And if an immune reaction ensues, he says, the antibodies generated in response to the carbohydrate will usually be weak.

To generate strong antibodies, scientists typically conjugate a carbohydrate antigen to a protein “carrier.” This route has been effective for antibacterial vaccines—a number of which have long been commercially available and are widely used, including carbohydrate-based vaccines by companies like Wyeth Pharmaceuticals, Sanofi Pasteur, and Merck & Co., against bacteria that cause pneumonia, meningitis, and other conditions.

But carbohydrate vaccines against cancer have not yet “worked out quite as well” as those against bacteria, Sucheck says. In fact, no carbohydrate-based anticancer vaccine has yet been approved for public use. Some scientists believe that anticancer vaccines have failed because both antibody and killer T-cell responses are needed to prevent cancer. Even though carbohydrate antigens induce antibodies, the antigens typically don’t elicit the killer T cells that do much of the immune system’s dirty work. 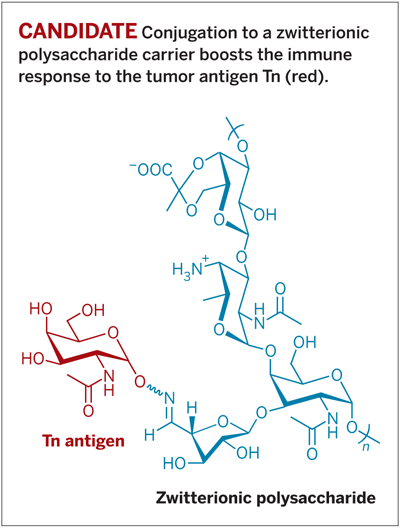 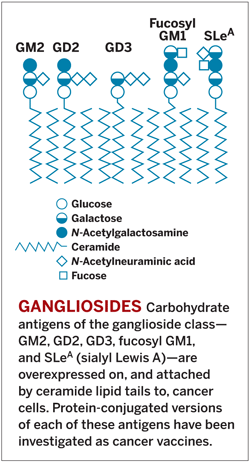 Carbohydrate vaccines based on strategies like these are being tested in human clinical trials and are showing promising results. Scientists in the field have high hopes for the success of one or more of these approaches.

Wayne State University carbohydrate immunotherapeutics specialist Zhongwu Guo’s preferred strategy focuses on engineering cancer cells to express sugars that could better attract the immune system’s attention. To do so, his team inoculates cancerous animals with chemically modified carbohydrate cancer antigens. After the animals develop an immune response to the modified antigens, the researchers feed the animals a compound that their cancer cells can use to produce the same type of cell-surface chemical modification. The animals’ immune systems are then able to attack the modified cancer cells selectively.

The researchers demonstrated the concept by derivatizing carbohydrate antigens expressed on surfaces of melanoma, breast cancer, and prostate cancer cells with N-phenylacetyl groups. Animals fed with these antigen derivatives produced an immune response to the modified antigens. The researchers then fed the animals N-phenylacetylated mannosamine, which added N- phenylacetyl groups to the carbohydrate antigens on surfaces of their cancer cells. The animals’ immune systems then attacked the modified cancer cells.

“We proved that the new immunotherapy can effectively control metastatic melanoma,” Guo says. “The results have not been published because larger scale animal experiments are in progress.” A company is interested in the technique and has been negotiating with Wayne State to license it, he adds.

A more conventional way to improve the immune response to carbohydrates has been to covalently attach the sugars to standard carrier proteins such as keyhole limpet hemocyanin (KLH). But the fate of Biomira’s Theratope, a carbohydrate-KLH conjugate vaccine that failed clinical trials a few years ago, showed that carbohydrate-protein conjugation does not necessarily a successful carbohydrate vaccine make. Researchers are experimenting with a variety of carrier alternatives. 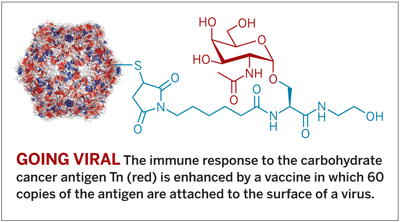 The researchers figured that multivalent displays of tumor-associated carbohydrate antigens could boost the normally weak immune response to these sugars. To test the idea, they synthesized the carbohydrate tumor antigen Tn and conjugated 60 copies of it to cowpea mosaic virus, which is noninfectious in humans. The outer shell of cowpea mosaic virus has 60 identical protein subunits, and the researchers used those as Tn attachment points.

Their experiments show that Tn-virus conjugates elicit high levels of high-powered antibodies that recognize breast cancer cells. The group’s preliminary studies also suggest that carbohydrate-virus conjugates slow the growth of tumors in mice, “which is very encouraging,” Huang says. His team is now working to further boost the immune response by eliciting killer T cells. Polyvalent conjugates of other carbohydrate antigens with viruslike particles have given similar results, Finn notes, and he and others recently received a grant to further advance the technology. 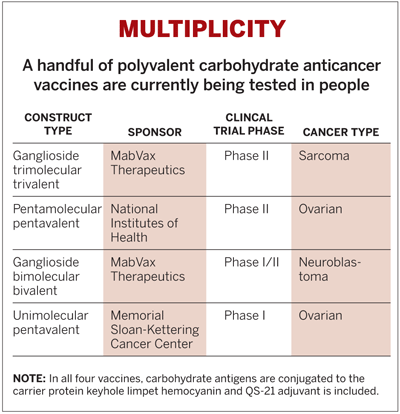 Zwitterionic polysaccharides are also being used as alternative carriers to strengthen the immune response to carbohydrates. Pioneered about a decade ago as immune-system activators by professor of medicine Dennis L. Kasper of Harvard Medical School, zwitterionic polysaccharides are carbohydrate polymers containing alternating positive and negative charges on adjacent monosaccharide units. Kasper and others have found that they can be used in place of proteins as antigen carriers.

Indeed, carbohydrate vaccine specialist Peter R. Andreana of Wayne State University and coworkers have found that carbohydrate-polysaccharide conjugates elicit both arms of the immune system—strong antibodies and killer T cells. They are currently testing the efficacy of their all-carbohydrate-based cancer vaccines in mouse cancer models.

The three-part conjugates elicit strong antibodies and killer T cells that can neutralize cancer cells. The vaccine is efficacious in a mouse model for breast cancer, Boons says. And the team is preparing for Phase I/II clinical trials in collaboration with the Mayo Clinic.

Sucheck’s group has also been synthesizing three-part conjugate vaccine candidates. On the basis of findings by glycobiologist Jeffrey C. Gildersleeve of the National Cancer Institute (NCI), Frederick, Md., and coworkers that humans develop high levels of antibodies against the carbohydrate rhamnose, Sucheck and coworkers are testing a conjugate of Tn antigen with an immune-activating peptide called YAF and rhamnose. They are also studying multivalent conjugate vaccines made from MUC1 glycopeptides, adjuvant, and rhamnose.

A group led by Joseph J. Barchi Jr., a structural glycoconjugate chemist at NCI, is developing yet another type of replacement for carrier proteins—nanoparticles. By attaching an antibody-inducing peptide and a MUC4 glycopeptide form of the disaccharide cancer antigen TF separately to gold nanoparticles, Barchi and coworkers have been able to raise antibodies that recognize both TF and the TF-glycopeptides. 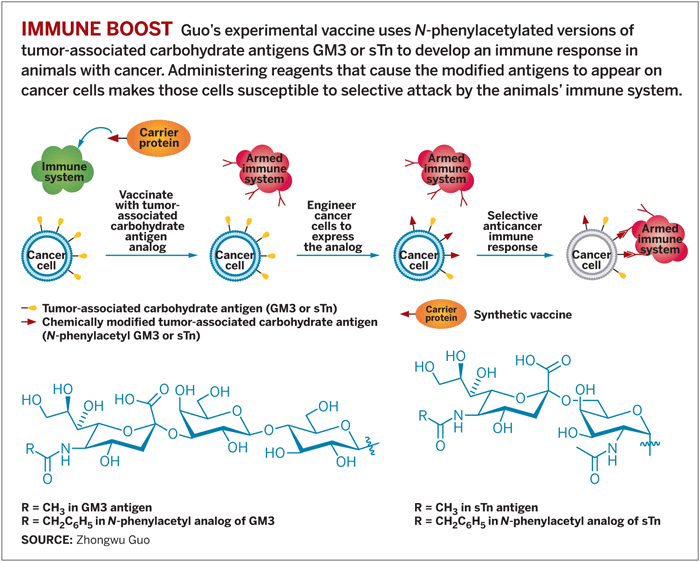 “I wanted to see if you could create immunity on a nanocarrier like gold and at the same time go against the paradigm of needing to covalently conjugate carbohydrate antigens to carrier proteins like KLH,” Barchi says. However, immune responses induced by the conjugates have so far been weak and nonprotective, he notes. His team continues to optimize the conjugates’ construction in hopes of boosting the immune response to them.

Ultimately, the test of carbohydrate vaccines will come not from in vitro experiments but from human clinical trials. One group that has gone farther than most in testing carbohydrate vaccines in humans is that of Philip O. Livingston, head of tumor vaccinology at Memorial Sloan-Kettering Cancer Center, New York City. 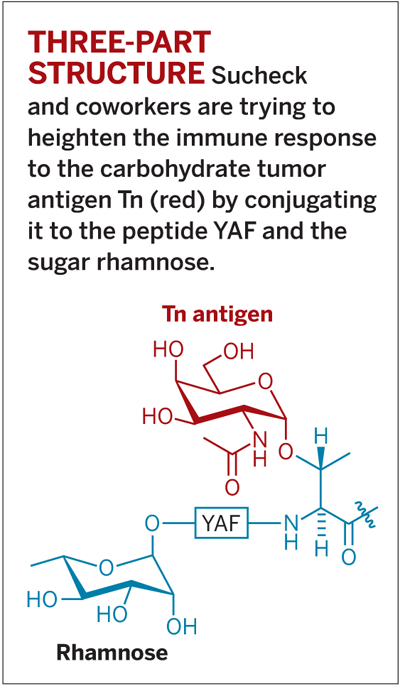 Livingston and coworkers focus on vaccines that induce immunity against cell-surface glycolipids known as gangliosides and other carbohydrate antigens overexpressed on cancer cells. Their formulations consist of carbohydrate antigens conjugated to KLH and include the naturally occurring tree-bark component QS-21 as an adjuvant. Some of the group’s vaccines are polyvalent, incorporating different types of antigens in the same formulation.

Meanwhile, Memorial Sloan-Kettering Cancer Center synthetic and carbohydrate chemist Samuel J. Danishefsky and coworkers have developed a single-molecule polyvalent vaccine consisting of five different carbohydrate antigens conjugated to KLH and including QS-21 adjuvant. A Phase I trial of this vaccine in ovarian cancer patients began last year. Danishefsky believes this to be the most complex fully synthetic vaccine ever to enter clinical trials.

Danishefsky’s group earlier synthesized a univalent vaccine based on the carbohydrate antigen Globo-H. That vaccine is in Taiwanese Phase II/III trials against metastatic breast cancer.

Such clinical trials “are the kind of studies that build confidence in the field,” Toledo’s Sucheck says.

“I think we’re close to figuring out what’s going to be required to make carbohydrate-based cancer vaccines a success,” Wayne State’s Andreana says. As researchers continue to zero in on the best peptides, proteins, lipids, adjuvants, polymers, nanoparticles, and other substances to enhance the immune response to carbohydrates, he says, “I think we’re right on the tail of really getting to cancer and eradicating it.”