Hot Spots
[+]Enlarge
Credit: Shutterstock/C&EN
Researchers are attempting to characterize the trillions of microorganisms that live in and on five human body sites. 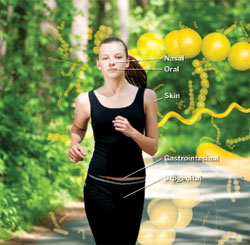 Credit: Shutterstock/C&EN
Researchers are attempting to characterize the trillions of microorganisms that live in and on five human body sites.

Scientists are showing that exposure to chemicals can affect the composition and function of the human microbiome—the microorganisms and their genes living in and on the human body. New research also suggests that a person’s microbiome can influence metabolism and how that person responds to chemical exposures. The findings raise the question: Should microbial effects be considered in future chemical risk assessments? Federal agencies seem to think so, but so far they are unsure what the effects mean or how to translate them to policy-making.

The urgency of the question became evident during a late-April workshop of the National Academies’ Standing Committee on Use of Emerging Science for Environmental Health Decisions. Workshop participants presented compelling evidence that microbes in the human gut can alter the bioavailability of chemicals and transform them into different compounds. They also suggested that microbes can change how a person responds to a particular drug, vaccine, or cosmetic, or even how quickly a soldier recovers from battlefield wounds.

Government officials are still a long way from incorporating microbiome effects into decision making. “The microbiome is not on the radar in terms of policy-making,” said Rita Schoeny, a senior science adviser at the Environmental Protection Agency’s Office of Water. And that situation is unlikely to change anytime soon. EPA and other federal agencies face the prospect of decreased budgets, and “anything that is not part of the budgetary discussion is going to get short shrift,” Schoeny added.

Nevertheless, preliminary work suggests that the human microbiome has huge implications for environmental health decisions, stressed Ellen Silbergeld, a professor of environmental health at the Johns Hopkins Bloomberg School of Public Health. For example, incorporating the microbiome into risk assessments might change how we think about mercury, she said.

“We’ve known for 60 years that the environmental fate and transport of mercury is regulated by microbial metabolism,” Silbergeld noted. But recently, scientists have shown that microbes in the human gut can methylate inorganic mercury and demethylate methylmercury. Because such reactions have not been considered in risk assessments, “our exposure assessments about mercury” may be incomplete, she emphasized.

Tom Van de Wiele, a researcher at Ghent University, in Belgium, presented several other examples of how the human gut microbiome affects the bioavailability and biological activity of chemicals by transforming them into more, or less, toxic species.

In one of the studies, Van de Wiele and colleagues exposed arsenic-contaminated soils to active microbes from the human colon. “We saw a very efficient arsenate to arsenite reduction,” he said, noting that “arsenite is a factor of 10 more toxic than arsenate.”

“More important, the microbes also actively contribute to the methylation process,” he added. Gut microbes detoxify arsenic by converting arsenate to monomethylarsenate, but they can also promote the formation of monomethylarsenite, which is as toxic as arsenite, Van de Wiele said.

“For metals, perhaps the microbiome is the major modulator of exposure,” EPA’s Schoeny acknowledged. But that “is not always going to be the case” for every chemical, she said. For example, genetics plays a key role in a person’s ability to metabolize disinfection by-products, particularly tri­halo­methanes, in drinking water, she noted.

In addition, human gut microbes have been shown to alter the toxic side effects of pharmaceuticals, Van de Wiele noted. For example, the nitro group on nitrazepam, a drug prescribed for insomnia and infantile spasms, is converted by microbial nitroreductase into an amine group in the gut. “That compound is then further metabolized by liver enzymes,” resulting in malformations such as cleft palate in unborn fetuses, he said. Surprisingly, “microbial nitroreductase is more important than liver reductase,” he noted.

The results suggest that microbial effects are important not just in assessing the risks of exposure to chemicals in the environment but also in evaluating the safety of pharmaceuticals. Many drugs are tested in places other than where they are sold, so it is possible that the side effects observed during clinical trials will be different from those seen in people taking the drug because of differences in their microflora.

The Food & Drug Administration would be wise to vigorously monitor the efficacy and safety of drugs that are marketed in this country but tested elsewhere to determine whether side effects really do correspond with what was observed abroad, remarked panelist Vincent Cogliano, acting director of EPA’s Integrated Risk Information System.

Much of the information about the human microbiome is coming from efforts such as the Human Microbiome Project, a five-year study begun in 2008 by the National Institutes of Health (C&EN, Dec. 13, 2010, page 32). As part of that project, researchers are sampling microbes in 300 females, ages 18 to 40, across five major body sites: nasal, oral, skin, gastrointestinal, and urogenital tract. The goal is to associate particular microbiomes with particular diseases.

FDA has several projects that are informed by the Human Microbiome Project, according to Carl E. Cerniglia, director of the Microbiology Division at FDA’s National Center for Toxicological Research. Some of those projects are investigating the role of the intestinal microbiome in metabolism.

“Bioavailability is a critical issue when we talk about food contaminants, food additives, probiotic products, and antibiotic residues in foods,” Cerniglia said. He and others at FDA are examining the bioavailability and metabolic activity of such chemicals as they move through the gastrointestinal tract. FDA also has a project looking at the skin microbiome and its interaction with cosmetics, as well as the vaginal microbiome and its interaction with probiotic products such as yogurt, Cerniglia noted.

Other federal agencies are also interested in the human microbiome. For example, the Department of Defense wants to determine the microbiome of soldiers before and after deployment because exposure to microbes on the battlefield is believed to affect how quickly a soldier’s wounds will heal. In addition, “We have noticed from time to time that different soldiers behave differently to vaccinations. It is very apparent that microflora play a role,” said Akbar S. Khan, science adviser and program director of DOD’s Defense Threat Reduction Agency.

It will take time and resources before researchers get a good handle on the human microbiome, but such work is likely to be important for risk assessment and could even help explain some of the conflicting results of seemingly equivalent toxicology studies. “This looks like a whole set of variables we’ve been ignoring,” Cogliano noted.

Similarly, research supported by the National Institute of Environmental Health Sciences (NIEHS) is investigating differences in how individuals respond to chemical exposures and what makes one person more susceptible to adverse health effects than another.

“Genetics has really not been giving us all the answers. I think we have to start considering the role of the human microbiome,” said Lisa H. Chadwick, a program administrator in the Division of Extramural Research & Training at NIEHS.

In the meantime, however, “it’s important that we not forget about the fact that we’ve got a rich database in the way that animals respond to chemicals,” stressed William H. Farland, chair of the committee. “At this point we can’t turn our toxicology over on its head, thinking that we missed a lot.”

Microbiome
Bacteria in our guts break down dozens of popular drugs
Environment
Food Emulsifiers Mess With Microbiome
Environment
Safety Of Triclosan In Toothpaste Questioned
Share X
To send an e-mail to multiple recipients, separate e-mail addresses with a comma, semicolon, or both.
Title: Unraveling The Microbiome
Author: Britt E. Erickson
Chemical & Engineering News will not share your email address with any other person or company.