A Cascade Of Natural Products 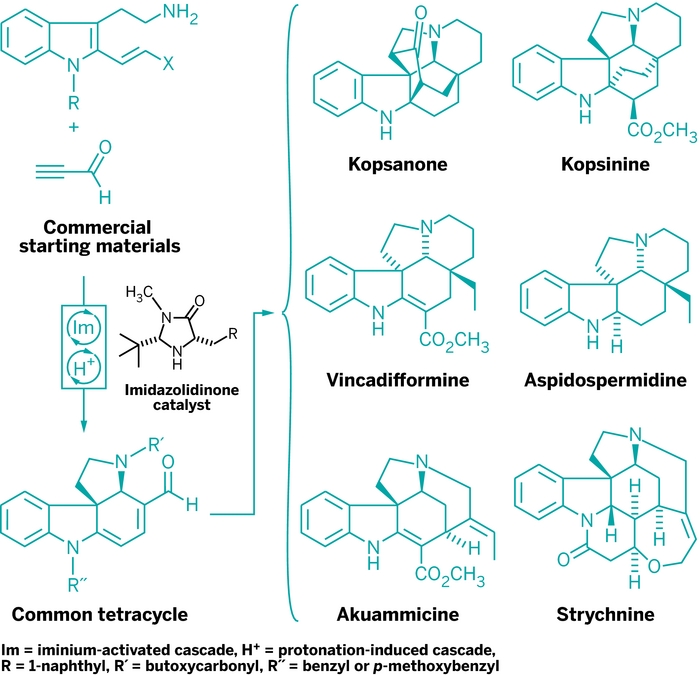 Approach yields alkaloids more efficiently than ever before.

Chemistry professor David W. C. MacMillan and coworkers at Princeton University devised the approach, which could ease the large-scale production of natural products and natural-product-like compounds for drug discovery and other applications.

The Princeton team used collective total synthesis to produce the neurotoxin strychnine and five other compounds in three families of alkaloid natural products, some in a record low number of synthetic steps. For example, they made (−)-strychnine in 12 steps from commercially available starting materials, compared with 25 steps in the best previous catalytic asymmetric synthesis.

They used two imidazolidinone-catalyzed organocascade cycles to convert tryptamine and propynal starting materials to a common tetracyclic intermediate. They then elaborated the tetracycle into the six alkaloids—two each from Strychnos,Aspidosperma, and Kopsia plants.

Some of the team’s endgames—tailoring of the common intermediate into final products—began in the middle of others, minimizing the total number of steps to produce all of the products together. The researchers note that the collective synthesis of the six alkaloids took a total of 34 steps, compared with 76 for the shortest previous comparable syntheses.

Advancing a common intermediate to several natural products is not new, and the researchers’ endgames were based on previously established procedures. But achieving uniquely short syntheses of natural products by combining the common-intermediate concept with organocatalysis and cascade reactions is novel.

The work “clearly demonstrates for the first time the synthetic value of a combination of organocascade catalysis with the use of a common intermediate, a ‘synthetic joint,’ to reach a variety of related natural-product targets,” comments Dieter Enders, an organocatalysis expert at RWTH Aachen University, in Germany. “The elegance of the synthetic protocols and the drastic shortening of the number of synthetic steps toward the final alkaloids, as compared to the previous methodology, is most impressive.”

The combination of cascade catalysis and collective total synthesis “demonstrates advantages over the classical stop-and-go approach and is clearly the future of small-molecule synthesis,” says former MacMillan postdoc Christoph Grondal, a specialist in organocascade reactions, now at Bayer CropScience in Germany.

MacMillan and coworkers hope to extend the approach to additional families of natural products and natural-product-like compounds.