[+]Enlarge
Credit: Nature
During printing (from top), antisolvent (A) is deposited on a patterned surface, followed by a solution of semiconducting organic molecules (B). The molecules form a single-crystal film that solidifies as the liquids evaporate. 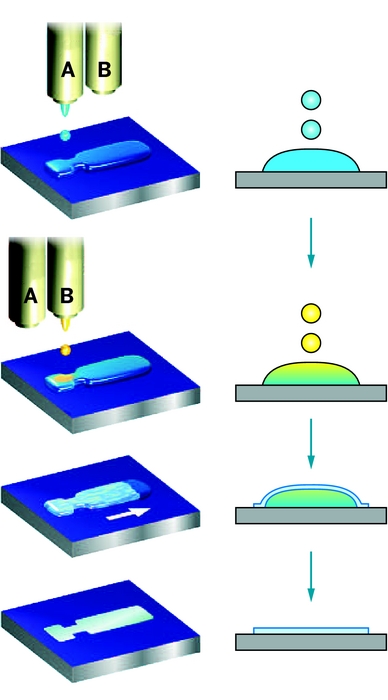 Credit: Nature
During printing (from top), antisolvent (A) is deposited on a patterned surface, followed by a solution of semiconducting organic molecules (B). The molecules form a single-crystal film that solidifies as the liquids evaporate.

Organic flexible electronics—a class of circuits that scientists are developing for radio-frequency identification tags, sensors, and computer displays—can now be produced with a simple ink-jet printing method that’s faster and more chemically versatile than previous methods, according to a letter in Nature (DOI: 10.1038/nature10313).

A research team led by Tatsuo Hasegawa of the National Institute of Advanced Industrial Science & Technology, in Tsukuba, Japan, has successfully printed thin single-crystal films of a semiconducting benzothiophene-based molecule on a silicon dioxide surface. The researchers accomplished the feat by floating the molecule on top of an evaporating droplet on the patterned SiO2 surface.

Although single-crystal semiconducting thin films have been patterned onto surfaces previously, via vapor- and solution-phase approaches, the rapid new ink-jet method will broaden the range of organic compounds researchers can explore for use in flexible electronics, says Antonio Facchetti, chief technology officer at electronic materials supplier Polyera Corp., in Illinois. “Single-crystal-based devices represent the ultimate in performance for semiconductors because of the absence of grain boundaries,” which interrupt the flow of charge carriers, he adds.

To print the single-crystal films, Hasegawa and his team first patterned the SiO2 surface with small hydrophilic areas of a particular shape. Then, they rapidly deposited on those surface patches droplets of N,N-dimethylformamide, which does not dissolve, and thus is an antisolvent of, the benzothiophene molecule.

Finally, they added droplets of the molecule dissolved in dichlorobenzene. As both solvent and antisolvent evaporate, the benzothiophene molecules grow into a single-crystal film. Compared with single-solvent ink-jet printing, this dual-solvent approach produces more uniformly thick films.

The researchers tested the method by incorporating a printed benzothiophene-containing film into a field-effect transistor, an electronic circuit component that acts as a voltage-controlled switch. The device performed as well as, if not better than, other transistors made with organic semiconducting single-crystal films.

The next steps for the team, Hasegawa says, are to enable the ink-jet technique to print electrical metal wires and then print an entire electronic circuit.