Materials Chemistry: Electrochemical cell based on same-metal electrodes is a first

[+]Enlarge
Credit: Courtesy of David Avnir
One doped and one undoped silver electrode stuck in a lemon have enough potential difference to trigger the external circuit and light up a red LED. 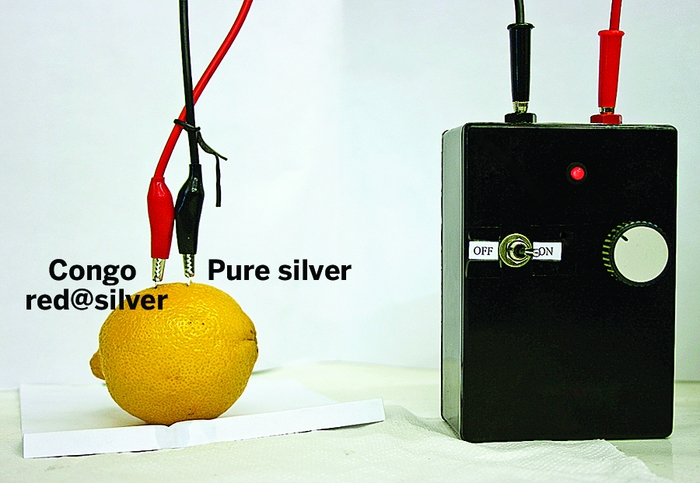 Credit: Courtesy of David Avnir
One doped and one undoped silver electrode stuck in a lemon have enough potential difference to trigger the external circuit and light up a red LED.

Israeli chemists have demonstrated a new concept in electrochemistry: a circuit in which the two electrodes—one doped with an organic dye—are made of the same metal. The work could lead to new types of electrode materials for use in batteries and fuel cells.

Electrochemical cells are classically prepared with a pair of electrodes made of different metals to establish a potential difference and drive a current, such as in Alessandro Volta’s original copper/zinc battery built in 1800. But David Avnir and Ofer Sinai of Hebrew University of Jerusalem have pulled off the feat of using the same metal for both electrodes: one made of pure silver and the other made of silver infused with the diazo compound Congo red (Chem. Mater., DOI: 10.1021/cm2000655).

Avnir’s group previously developed a method to dope metals with a few weight percent of small organic molecules, polymers, organometallic catalysts, and enzymes to make new catalyst materials (C&EN, Dec. 22, 2008, page 13). They create the composites, designated as organics@metals, by reducing metal ions in a solution containing the dopant. As the metal is reduced, nanocrystallites form and then aggregate into a porous material that preserves many of the pure metal’s properties. 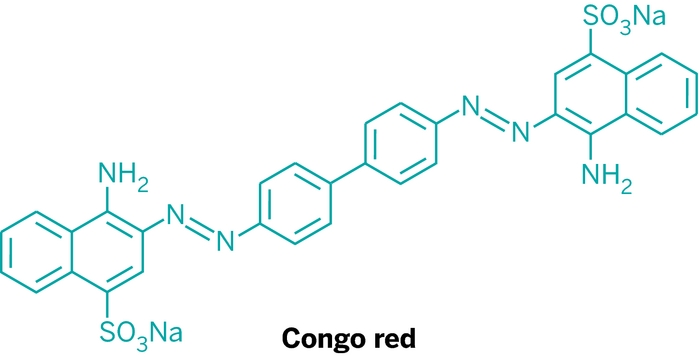 In analyzing a Congo red@silver electrode, Avnir and Sinai found that the composite’s electrode potential is different enough from that of a similarly prepared pure silver electrode to create a simple electrochemical cell. The researchers inserted the fabricated electrodes into a lemon, which served as the electrolyte solution, a tactic commonly used by schoolchildren to build circuits for science fair projects.

By connecting the electrodes through an external circuit, they established enough current flow to power a light-emitting diode; when they used two pure silver electrodes, the LED didn’t light up. Avnir and Sinai showed that the potential difference originates from the different rates of reactions taking place at the electrodes, rather than by different types of reactions.

“This is a really elegant piece of work—bona fide science that has an artistic side,” says catalyst materials scientist Gadi Rothenberg of the University of Amsterdam. The research is an eye-opener, Rothenberg observes, and not just for using a lemon to help “see the light.”

The experiment’s great value, he notes, is in demonstrating a conceptual change in the way electrode materials are made, which is “essential for helping bring about step changes in technology.”

Besides developing new types of batteries based on one doped and one undoped electrode or two differently doped electrodes, the technology could be used to improve metal corrosion resistance in industrial applications, Avnir points out. It also could allow cheaper metals such as iron to replace platinum electrodes in water-splitting applications in fuel cells for electric cars, he says.