[+]Enlarge
Credit: Shutterstock
EPA is concerned that children are getting too much fluoride from drinking water and other sources. 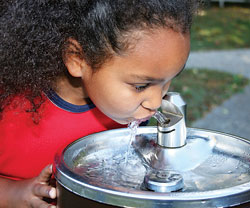 Credit: Shutterstock
EPA is concerned that children are getting too much fluoride from drinking water and other sources.

EPA proposed on Jan. 10 to phase out use of the pesticide sulfuryl fluoride on food because of concerns that children are being exposed to too much fluoride. The announcement came just days after the agency said that it is considering lowering the limit for fluoride in drinking water (C&EN Online Latest News, Jan. 10).

Both actions were prompted by new EPA risk assessments suggesting that some children are being exposed to levels of fluoride that put them at risk for developing dental fluorosis, a condition that can lead to severe pitting and staining of teeth.

“EPA has found that sources of fluoride exposure have increased over the years because of several factors, including increased access to fluoridated drinking water, foods and beverages processed with fluoridated water, and consumer dental products such as fluoride toothpastes and rinses,” Robert M. Sussman, EPA senior policy counsel, said at a briefing on Jan. 7. The data show that increases in sources of fluoride have been accompanied by an overall increase in dental fluorosis, he stressed.

Residues of sulfuryl fluoride, a fumigant used on stored grains, dried fruit, nuts, and cocoa beans, contribute only a tiny amount to a person’s total exposure to fluo­ride. However, “EPA’s laws regulating pesticides don’t allow it to be added to the food supply when a population is already being overexposed,” says Chris Neurath, a researcher with the Fluoride Action Network (FAN).

The Food Quality Protection Act requires EPA to set safety standards for pesticides in food on the basis of aggregate exposure. “The agency calculated and found that many children are already overexposed to fluoride in tap water,” notes Jane Houlihan, senior vice president for research at the Environmental Working Group (EWG). “This use of fluoride in pesticides would put them further over the limit, and no additional amount of fluoride is really acceptable,” she says.

In 2004, a coalition of advocacy groups, including FAN and EWG, petitioned EPA over its previous risk assessment of sulfuryl fluoride. The groups now welcome EPA’s action, saying it “represents a growing consensus that the American public is being exposed to excessive fluoride.”

Dow AgroSciences, which makes sulfuryl fluoride for use on food, is disappointed with EPA’s decision. The company stresses that the pesticide contributes negligible amounts of fluoride to an individual’s overall exposure.