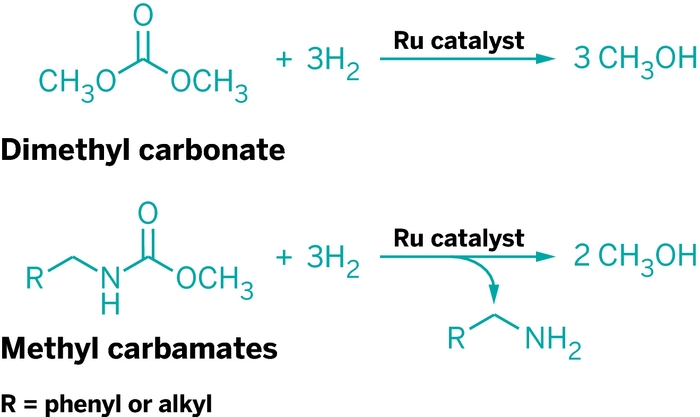 Catalytic hydrogenation of carbon dioxide-derived carbonate, carbamate, and formate intermediates turns out to be a viable option to make methanol from CO2, according to a team of Israeli chemists. Their indirect approach could lead to more efficient industrial production of methanol and offers an opportunity to use CO2 generated from burning fossil fuels as a chemical feedstock.

Methanol is typically produced by subjecting synthesis gas (CO and H2), derived from coal or natural gas, to high temperature and high pressure in the presence of a heterogeneous catalyst. Chemists would like to make methanol by direct hydrogenation of cheap and readily available CO2 instead, but a practical process has not yet been developed.

David Milstein and coworkers at the Weizmann Institute of Science reasoned that an alternative pathway would be to hydrogenate common CO2- or CO-derived intermediates under milder reaction conditions. The researchers expanded previous work in Milstein’s lab on homogeneous ruthenium phosphine-pyridine catalysts to develop versions that catalyze hydrogenation of the carbonyl intermediates. In what the researchers believe is a chemical first, they used the homogeneous process to convert methyl formate and dimethyl carbonate to methanol, and methyl carbamates into methanol and an amine (Nat. Chem., DOI: 10.1038/nchem.1089).

These atom-economical reactions generate no by-products or waste and proceed under neutral, homogeneous conditions at mild temperatures and hydrogen pressures without solvent, Milstein notes. They represent “the ultimate in green reactions,” he says.

“Although many researchers have been trying to find a practical, fast, and economical way to make methanol from waste CO2, usually by heterogeneous catalysis, catalyst longevity and sensitivity to poisoning are serious limitations,” says Philip G. Jessop of Queen’s University, in Kingston, Ontario, whose research includes CO2 fixation. “Homogeneously catalyzed hydrogenation of CO2 to methanol is known, but the conditions are quite severe and the yields are low. Milstein’s group describes an exciting two-step work-around for the homogeneous hydrogenation.”