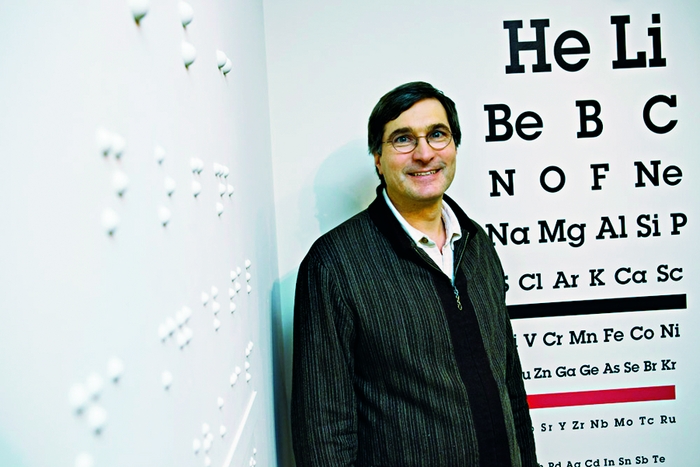 Right now, inside the museum at the Chemical Heritage Foundation (CHF), in Philadelphia, two of the strangest eye charts in the world are hanging next to each other. One is made entirely of braille characters, and the other features a list of the chemical elements. The charts look almost like something out of the office of an eccentric optometrist who practices alternative medicine. But they’re not. Rather, the two charts compose “Braille,” a piece that Nova Scotian artist David Clark created after being inspired by Dmitri Mendeleev, the father of the periodic table.

The installation “reminds you that all the senses are needed in chemistry,” says Marjorie Gapp, curator of art and images at CHF. Since Feb. 4, Gapp and the museum have curated “Elemental Matters: Artists Imagine Chemistry,” an exhibit that celebrates works—such as Clark’s “Braille”—inspired by the chemical elements. The exhibit is part of CHF’s International Year of Chemistry festivities.

To Gapp, the art displayed in “Elemental Matters” goes a long way toward telling the central science’s full story. “Chemistry is so much more than a laboratory,” she tells Newscripts. “These artists help you experience chemistry in a different way.”

Take, for instance, Susan Alexjander. For her exhibit submission, the Lake Oswego, Ore.-based composer identified eight chemical elements that are essential to life (such as hydrogen and carbon). She then mapped the magnetic-field-induced oscillations of the nuclei in these elements, called Larmor frequencies, to audible frequencies with a synthesizer, making music (C&EN, Oct. 5, 2009, page 43). Alexjander’s soundtrack plays throughout “Elemental Matters,” providing the exhibit with, as Gapp puts it, an “ethereal” atmosphere.

To Alexjander, the exhibit’s merging of chemistry and art makes perfect sense. “There are so many artists that use science as an inspiration, and I think there are more scientists that are being inspired by art,” she says. “I just see science and art getting closer and closer.”

“Elemental Matters” runs at the Museum at CHF until Dec. 16. 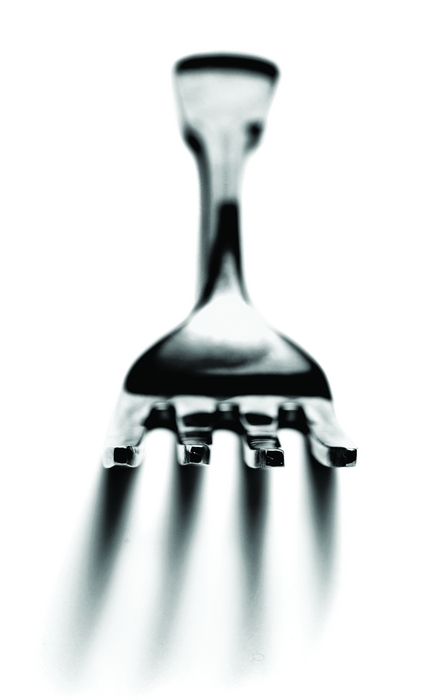 For weight-conscious art enthusiasts thinking of stopping at a restaurant on their way home from the museum, researchers at the University of Utah have one piece of eating advice: Take large bites.

In a forthcoming Journal of Consumer Research study that was published online on June 2, Arul Mishra, Himanshu Mishra, and Tamara M. Masters, all of Utah’s David Eccles School of Business, report that large bites could actually be useful in curbing the overconsumption of food. The research team came to this conclusion after giving patrons at a local Italian restaurant either a small or large fork with which to eat. Monitoring the two groups’ levels of consumption, the research team discovered that patrons using a small fork tended to eat more food than those using a large fork—a phenomenon the team attributes to the patrons’ goal of achieving hunger satisfaction.

“Diners focus on the visual cue of whether they are making any dent on [sic] the food on their plate to assess goal progress,” the researchers write. When using a small fork, “diners feel they are not making much of a dent in consuming their food,” they add. To compensate, small-fork diners take more bites of food, thereby eating more than their large-fork counterparts. To combat this trend, the research team recommends that diners use larger forks to facilitate larger bites.

Taking larger bites in the short term can prevent overeating in the long term? Suddenly, biting off more than you can chew doesn’t sound like such a bad idea.

Education
New international students cannot enter US for online-only programs
Education
Chemistry-style fun and games
Undergraduate Education
Block plan compresses one class into a few weeks for deeper learning
Share X
To send an e-mail to multiple recipients, separate e-mail addresses with a comma, semicolon, or both.
Title: Chemistry-Inspired Art, Bite-Size Research
Author: Jeff Huber
Chemical & Engineering News will not share your email address with any other person or company.