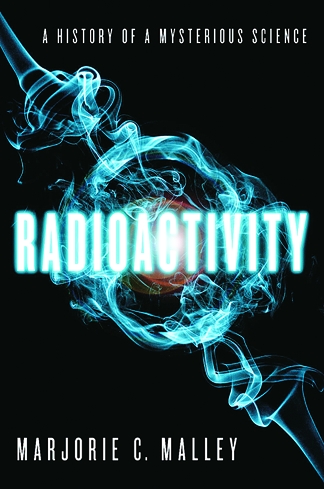 Radioactivity figures large in the public consciousness in 2011, but many chemists may think it matters little to their work, if at all. Introductory chemistry classes taught us the names of the most important figures and their contributions, but in the 21st century radioactivity is almost entirely the realm of physicists. So it’s good to be reminded that chemists did a lot of the early work on the mysterious “rays” and that our fundamental understanding of atomic structure and physics itself are both a result of figuring out radioactivity.

For those of us who need a refresher on the early days of radioactivity research, “Radioactivity: A History of a Mysterious Science” presents a short and approachable summary. Understanding the relationships between the many radiation researchers and their discoveries is not much less daunting than understanding the physics behind their work. The book, written by science historian Marjorie C. Malley, does an admirable job of presenting the events of a turbulent young science clearly and logically.

Radioactivity, Malley explains, came to the fore in 1896 when Antoine-Henri Becquerel discovered that a mineral containing uranium would darken a photographic plate without light. His work followed closely on the heels of the discovery of X-rays by Wilhelm Röntgen in 1895. Scientists were soon experimenting with uranium and other radioactive minerals and found that no outside influence—be it light, gravity, or a number of other theories tested—affected the radiation. The realization that radioactivity had an atomic origin would lead to discoveries about atomic structure, the nature of energy, and many other fundamental phenomena. Radioactivity research would also produce numerous medical procedures, like X-ray imaging and radiation treatment for tumors, as well as energy and weapons technology.

Malley is up front about the book’s limitations. Her goal, she says in the preface, is to provide “a broad and accurate history while avoiding excessive technical detail,” and for better or worse she does exactly that. The book is light on details; it’s on the level of, say, a high school textbook. That’s not to say that there isn’t a lot to be learned from it; there is. But don’t expect to come away from the book an expert.

The book’s greatest value may be in reminding us that chemists were integral to uncovering the secrets of radiation and atomic structure. As Malley points out, radioactivity has been almost exclusively the domain of nuclear physics since the 1920s. Before that, however, it belonged at least as much to chemists as to physicists.Pierre and Marie Curie collaborated closely with chemists like Gustave Bémont and André-Louis Debierne throughout their careers. Marie, a trained physicist, won her second Nobel Prize, in chemistry, a century ago for her discovery of polonium and radium and her isolation of the latter (C&EN, June 27, page 66).

Ernest Rutherford worked on radiation closely with chemist Frederick Soddy at McGill University, and Malley writes that in some cases Soddy arrived at important realizations first. Soddy realized that “emanations” from thorium were an inert gas and the product of a transmutation of thorium, and Malley says Soddy had to convince Rutherford of the importance of his discovery. She quotes Soddy: “The constitution of matter is the province of chemistry.”

The flip side is the importance of early radioactivity research to chemistry. If there’s one lesson to be learned—or relearned—from “Radioactivity” it is that all our knowledge of nuclei, subatomic particles, nuclear forces and structure, and isotopes is a product of work done to further the understanding of radioactivity.

Soddy coined the word “isotope” in 1911 when he realized that atomic number, not weight, differentiated the elements. He resolved long-standing frustration at the inability to chemically separate seemingly different elements, which had plagued researchers trying to get pure samples of radioactive materials.

Likewise, Rutherford’s famous foil-scattering experiment led to Niels Bohr’s model of the atom with a relatively small nucleus and electrons around it, although his intent was simply to hone models of atomic scattering, not necessarily to revise the atomic model.

Modern chemistry is deeply indebted to early radioactivity research, even though nowadays nuclear physics seems more like a distant cousin. Without it, fundamental ideas like wave-particle duality and the importance of probability would not be known.

“Radioactivity” is laid out in roughly chronological order, a choice that can be alternately helpful and frustrating, especially when the author has to stray from it. The early years of radioactivity research were chaotic. Discoveries came fast and furious, not a few of them later found to be false, and many happened almost simultaneously in labs thousands of miles apart.

Malley almost has to impose a linear sequence to keep the reader on track. And unconnected events occasionally end up next to each other where chronology dictates, as with early ideas about atomic energy inspired by Albert Einstein’s formulations in 1905 and Pierre Curie’s death in a traffic accident in 1906. The sequence is logical, but it can still be jolting. 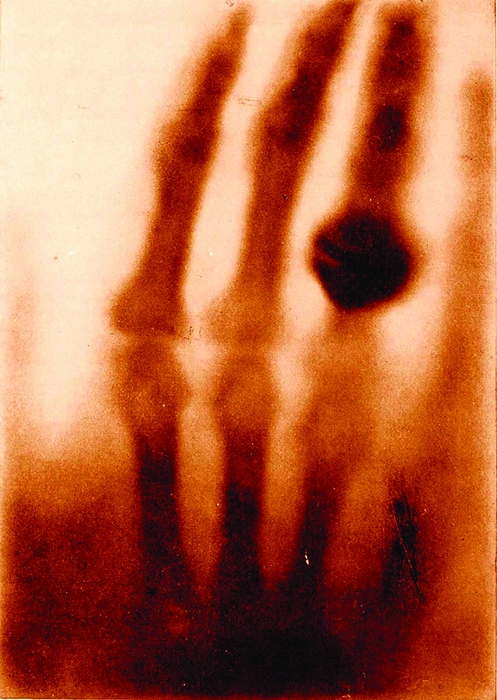 Credit: National Library of Medicine
Image of the hand of Mrs. Wilhelm Röntgen, 1895.

What’s worse, Malley skips back and forth in time to keep her subject matter consistent, though there is a helpful timeline in the appendixes. Short sections within each chapter follow different threads of the story, like Rutherford’s discovery of the alpha and beta components of radiation or the discoveries by a number of researchers that led to the realization that many of the “rays”—as the radioactive energy was first described—were in fact charged particles. Each section might describe five or 10 years of research, meaning the clock is suddenly dialed back at the end of each section to describe another aspect of the story that evolved at the same time.

Nonetheless, a bare timeline of events in radioactivity’s history would be useless, so it’s easy to see why the author avoided that approach. But for a nonhistorian, keeping track of all the dates starts to get overwhelming. The occasional schizophrenic structure—is the book ordered by date or by subject?—can be disorienting.

The book does have several useful appendixes. One contains the endnotes, which offer a lot of further reading. Another is a “Glossary of Rays and Radiation” that helpfully defines the different types described in the book; this listing is especially useful in cases where the terms are not used anymore. Also included in the appendixes are historical and contemporary decay series of different radioactive elements and a physical explanation of nuclear forces and the cause of radiation.

The book’s most serious downfall is that it ends too soon. It would perhaps be more accurately subtitled “An Early History.” Many of the developments of radioactivity research most relevant to the book’s audience—nuclear weapons and energy in particular—get short shrift compared with interesting but perhaps less germane topics. The Manhattan Project actually gets less space in the book than the ultimately meaningless connection between oil deposits and radioactivity.

There is every reason to leave out such huge topics, but Malley should be up front about omitting them. The development of the atom bomb and humanity’s attempts to tame the atom for electricity are critical parts of radioactivity’s history, not to mention the history of humankind. Readers may be disappointed to come away from the book knowing a lot about Becquerel rays (ionizing radiation later known as alpha, beta, and gamma rays) but almost nothing about how we ended up with a situation like that at the Fukushima nuclear power plant in Japan: badly damaged, perhaps destroyed, by an earthquake/tsunami.

Malley’s book would be perfect outside reading for high school chemistry students. Indeed, in the book’s preface, she lists “making the history of science accessible for students and for teachers” as one of her goals. This is not to say that an older audience, professional or otherwise, can’t benefit from reading “Radioactivity.” The book is an excellent primer on the early history of the field, and although the writing is occasionally clunky, it is generally an engaging and easy read. Even if it is a simple history, readers of all backgrounds will benefit from Malley’s description of our quest to understand the mysterious phenomena that ended up reshaping almost all scientific thought.