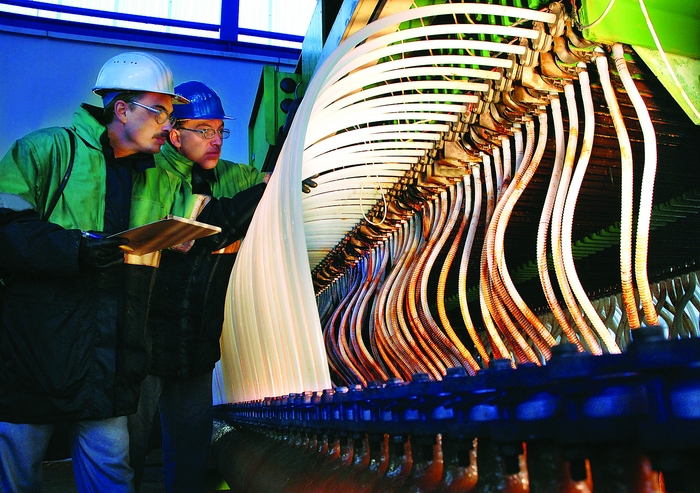 Energy prices have been breaking records again this year, prompting consumers to monitor how they use their cars and set their thermostats. Chemical companies are also paying more attention to energy usage as it begins to take a bigger bite out of their budgets.

In Europe, optimizing energy consumption has been a focused exercise for several years, driven by high prices in the region and a keen awareness of the environmental impact. It is just good business, most companies say, and the value of the efforts and the lessons learned extend beyond the region.

“The global trend upward for energy prices is clear, based on resource scarcity and political boundaries,” says Achim Ilzhöfer, climate program manager at . “Energy efficiency is a means to remain competitive.”

The European chemical industry has lowered its energy intensity—energy consumption per unit of production—by an average of 3.7% per year from 1995 through 2009, according to data from the (CEFIC), a trade association. In that same period, the U.S. chemical industry’s energy intensity dropped an average of 3.1% per year. CEFIC estimates that energy accounts for 40–60% of overall manufacturing costs for chemical companies in the region.

Historically, energy prices are higher in Europe than in most other regions, and the divergence from the U.S. in particular has been pronounced in recent months. At $110 per barrel, the average monthly price for the European benchmark crude, North Sea Brent, is about $10 higher than the U.S. benchmark, West Texas Intermediate. And European natural gas prices are near $11 per million Btu, more than double the price that prevails in the U.S.

Mills is based at Dow’s European headquarters near Zurich, instead of the corporate headquarters in Michigan. “There is a lot of activity in Europe on energy and climate change,” he says, “so it makes sense to be in this region.”

Dow was an early leader with energy goals, establishing its first 10-year program in 1994. The goal was to reduce energy intensity by 20%, which means making the same amount of product with 20% less energy. “The basic plan was to invest $1 billion to save $1 billion,” Mills explains, “but we ended up with a cumulative savings of $4 billion.” He acknowledges that part of the boost came from high energy prices during the period, but the value of the program was clear. “The success of this program really drove home to the company that energy efficiency is very much about productivity and cash savings,” he says, “and that the savings keep on accumulating.”

A second 10-year program started in 2005, targeting a further 25% energy-intensity reduction. The company has already saved an additional $5 billion in energy costs, although its progress slowed during the recession, when lower plant operating rates hampered efficiency.

To reinvigorate the effort as the economy recovers, Dow recently launched a $100 million-per-year program dedicated to energy efficiency. “We wanted to reinforce the point that all businesses and all sites have a role in delivering efficiency improvements,” Mills explains. The response to the program has been strong among employees, and the company has committed $84 million to 39 projects already this year.

Bayer has been hard at work with its own program, Bayer Climate Check, which focuses on energy efficiency and greenhouse gas emissions. The European Union’s Emissions Trading System means that local companies bear the additional cost of carbon emissions on the combustion of any fuel. At current prices, carbon allowances add about $1.50 per million Btu to the price of natural gas. 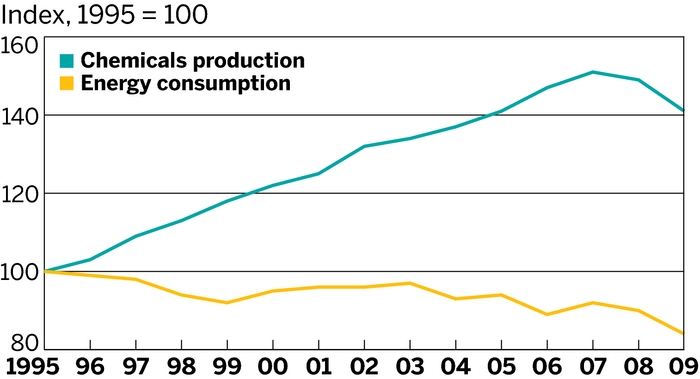 The company began the program in 2007, Ilzhöfer says, although it has been active with energy-efficiency projects since the 1990s. “This was our first global check of all of our sites using a consistent and holistic approach,” including a review of areas such as process technology, raw material purchasing, and building insulation. The diversity of Bayer’s business—from chlorine production to crop protection to health care—meant that a standardized approach was needed. Through 2010, the company has reviewed all 140 of its energy-intensive sites and expects to achieve a 10% reduction in CO2 emissions by 2013.

Bayer’s efforts extend to fundamental chemical process innovations. A recent example is its new oxygen depolarized cathode process to produce chlorine, which uses cathode technology based on fuel cells, and delivers a 30% reduction in energy consumption over the existing membrane process. Bayer is installing the system at its site in Krefeld-Uerdingen, Germany, and expects to license it to third parties beginning in 2015.

Bayer Climate Check worked so well that the company includes it as part of the process design services that are sold through Bayer Technology Services. Customers can get an evaluation of energy usage at their sites, details on best practices to improve energy efficiency, and optimization of power and steam generation. The company also offers a database to help customers track energy-efficiency projects.

A systematic approach is the right plan, according to Ken Somers, senior energy-efficiency expert at management consulting firm . Driving for energy efficiency is akin to “weeding your garden,” he says. “You have to do it regularly so it becomes a standardized task.”

Potential energy savings for companies vary by the processes they are running: Batch processes, such as for pharmaceutical intermediates, can yield savings of 20–30%, continuous processes for specialty intermediates can save 10–15%, and high-intensity processes for products such as soda ash and ethylene can eke out 5–8% in savings. “The companies that save on their energy bills have more cash to outcompete the less efficient companies,” Somers says.

CEFIC and its member companies recently saw similar savings in the . This spring, process experts completed a pilot study with small- and medium-sized firms in Poland, Bulgaria, and Italy that yielded a 10–20% reduction in energy use for the participants. “We developed this program to improve the competitiveness of the European chemical industry,” explains Peter Botschek, CEFIC director of energy, health, safety, and environment. “Systems were already in place at the big companies, but there was further potential to improve industry efficiency by helping the small companies.”

The target audience for this effort is significant, Botschek says, because companies with fewer than 250 employees represent 96% of chemical companies in Europe. CEFIC is working with local governments and regional networks to implement the program more broadly.

Regardless of size, it seems that U.S. companies can learn a lot from efforts in Europe, according to McKinsey’s Somers. “When we work with a European company with a global footprint, they always tell us to look at their U.S. sites first because you can get the most results.” And Somers usually saves 10–20% more in energy at a U.S. site than at one in Europe. “The U.S. is just not as focused on energy efficiency,” he says.