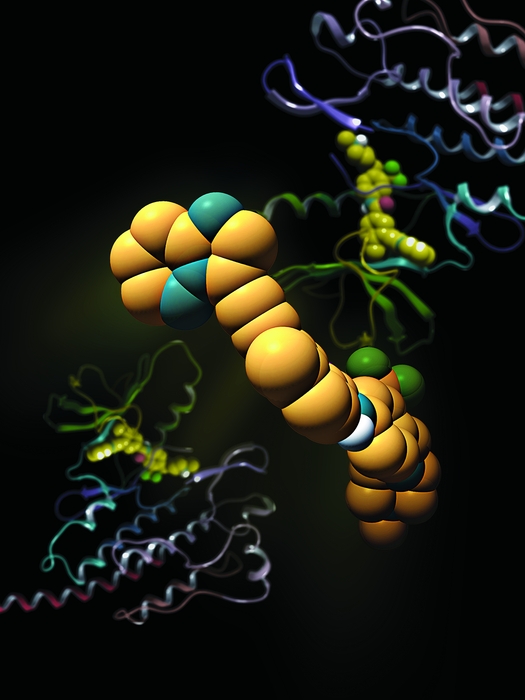 Having support is great for taking big steps. And the chemical simulation software firm Schrödinger has notable supporters, including two billionaires who are trying to help it achieve some of the returns long promised by computer-aided drug design.

Scientific computing came to the fore in the 1980s. Although computing power has since soared and computer-aided drug design is more sophisticated than ever, the technology has yet to solve many complex problems. At the same time, some companies in the scientific software arena are investing less in basic research and have moved into other product areas.

Schrödinger was founded in 1990 by chemistry professors Richard A. Friesner at Columbia and William A. Goddard III at California Institute of Technology. Today it has about 160 employees; most of them, as well as its managers, are Ph.D. scientists.

“Schrödinger has a good reputation for science,” says Wendy A. Warr, an independent consultant and associate editor of the American Chemical Society’s Journal of Chemical Information & Modeling. Along with OpenEye Scientific Software and Chemical Computing Group, she ranks Schrödinger among the most innovative companies working on computer-aided or structure-based drug design software. Competing software, she points out, also comes out of the nonprofit Cambridge Crystallographic Data Center, in England.

Warr estimates combined 2010 sales of the three companies at $60 million, or about 15% of the overall cheminformatics market. When it comes to selling what can be pricey software, they all face the same pressures, including pharma industry cutbacks, constrained budgets, outsourcing, and competition from academic and open-source software.

Schrödinger’s products include software for molecular modeling and simulation, lead discovery and optimization, and visualization and automation. The Gates money has gone toward hiring more scientists and purchasing a computing cluster, explains President Ramy Farid. “We decided that it was still really important just to work on improving the technology.”

Unlike in other industries where computers have replaced human hands, computational chemistry hasn’t become an enabling technology in drug discovery, Farid acknowledges. “Computational chemists have been promising this for decades, but they haven’t delivered because there hasn’t really been the kind of investment in the science that is happening now at Schrödinger,” he says.

For investors, Schrödinger has never turned to venture capitalists, who inevitably look to exit their investments. Farid believes that the support of “two excited billionaires who love science” will be important in making advances. “You need a little bit more patience, and that’s what these two have given us,” he says.

In the past five years, Farid has increased the size of the company’s drug discovery applications group (DDAG). “The DDAG is a pretty big group. Plus, with the computing cluster, we are doing things very differently than what is done in pharma,” he says. “We have more computing resources than most multi-billion-dollar pharma companies.”

DDAG consists of computational and medicinal chemists, called modelers, who help software developers create the right tools for drug discovery. The modelers also work with Schrödinger’s pharmaceutical company clients. To date, the company has participated in about 30 drug discovery collaborations, the most recent, with Janssen Pharmaceutica, coming last month. It generally structures the deals around the value its technology brings and milestones.

Schrödinger has been successful selling its software and services and is self-supporting, Farid says. At the same time, the company wants to move away from the constraints of what he describes as the traditional trial-and-error approach to drug discovery and apply its technology to the best effect. The goal, he says, “is to have computational chemistry drive the drug discovery process.”

Unfazed by the failures of earlier computational chemistry firms to realize this goal, Schrödinger partnered with Atlas Venture to create Nimbus Discovery in 2009. Last year, Nimbus and Schrödinger set up a partnership that gives Nimbus access to software, scientists, and computing resources. Schrödinger holds an equity stake and will receive success-related milestone payments.

Nimbus can choose its own disease targets—and it is going after the hard ones. Its first step was to search the literature and patents to find thousands of potential targets. “We’ve looked at those targets and determined whether structure-based approaches are amenable and where we believe that our technology can actually be used to develop better drugs faster,” Farid says.

Nimbus has scientists and managers from the drug industry at the helm and as advisers, but otherwise it is virtual and uses outside firms for chemistry and other services. To keep focused on discovery, the company hopes to partner its programs early in development. It facilitates this process by housing them in target-specific subsidiaries that can be independently acquired.

In March 2011, in a round of funding, Gates and Friesner invested in Nimbus. Three months later, another round added $24 million from existing investors and from Lilly Ventures and SR One, the venture capital arm of GlaxoSmithKline.

Access to Schrödinger’s technology includes the use of a new software package called WaterMap, which came from work in Friesner’s lab. Farid says WaterMap offers a rigorous approach to assessing the locations and thermodynamic properties of water molecules in protein binding sites. With a clearer picture of the forces that drive binding, chemists can design molecules to have the best mix of selectivity, potency, size, and druglike properties.

Indeed, Warr says, protein dynamics and ligand binding remain poorly understood, and deciphering the role played by water molecules is a step in the right direction. “If Schrödinger has had a good go at addressing the waters problem, the software will be important,” she says. Although the company has published results on the basis of WaterMap, it is still relatively untested, she notes.

Farid suggests that work at Nimbus has the potential to validate their approach to drug discovery. Already, Nimbus has identified compounds that act on targets where traditional screening and medicinal chemistry approaches have failed, he says. “We’re getting extremely encouraging results that this technology is starting to pay off, but it’s still early on and Schrödinger will continue to invest heavily to improve the science.”

Schrödinger, Nimbus, and their investors “have the sense to realize that the real payback is not going to be immediate,” Warr says. “The company that is at the crest of the wave in one particular cycle usually is not the one that then comes up in next cycle,” Warr observes, referring to now-defunct or reconfigured companies from the computational chemistry boom of the 1980s. Meanwhile, new firms such as Schrödinger have emerged. “The ground changes and a lot of people come in,” she says, “not just the fast followers but people who are doing new types of science.”

Drug Discovery
AI for drug discovery came into its own
Drug Development
Drug hunters explore allostery’s advantages
Informatics
Artificial intelligence to spread in drug research
Share X
To send an e-mail to multiple recipients, separate e-mail addresses with a comma, semicolon, or both.
Title: Taking A Big Step In Virtual Space
Author: Ann M. Thayer
Chemical & Engineering News will not share your email address with any other person or company.