The U.S. chemical industry enjoyed another strong quarter in the midst of a global economy that is demonstrating evidence of a second slowdown. The 23 firms tracked by C&EN delivered earnings for the second quarter that were 30% higher than in the same period in 2010. Almost all the companies were able to raise prices steeply to more than offset increased costs for energy and raw materials.

Demand from customers supported the price increases, often in the double digits, but most chemical firms did not report significant sales volume growth during the quarter. “Overall, we had excellent pricing performance driven by innovative new products and disciplined pricing actions across all businesses. Volume was up 2% for the quarter compared to 9% in the first quarter,” reported DuPont Chief Executive Officer Ellen J. Kullman in a conference call with analysts.

With the price increases, DuPont boosted sales by 19% to $10.3 billion compared with last year’s second quarter. Its $1.3 billion in earnings beat analysts’ expectations, but the successes were spotty, remarked Robert Koort, chemicals analyst at Goldman Sachs.

“Unlike beats in prior quarters that were broad based, with all segments outperforming, this quarter’s outperformance was more due to exceptional results from performance chemicals (titanium dioxide), while several other segments lagged expectations,” Koort wrote in a note to investors. He listed the lagging segments as performance materials, electronics, performance coatings, and safety and protection.

Higher pricing also came out ahead of volume increases at Dow Chemical. The company saw earnings jump 61% to just under $1 billion. Dow was able to raise prices 20% in its performance products business because of strong demand in the energy, health, nutrition, and oil additives markets. Although all Dow businesses increased earnings compared with last year’s second quarter, volumes for coatings and infrastructure and for performance systems were flat.

Coatings were a weak spot as well for Cytec Industries, where volumes sank 9% compared with the same quarter last year. The company made up the difference with higher prices and the help of favorable exchange rates brought on by the weak dollar. And its engineered materials and process separation businesses did increase sales volumes. But overall, Cytec’s quarter earnings of $46 million were down 15% compared with the year-ago ­period.

The lackluster growth in volumes should not be a surprise, according to the American Chemistry Council, an industry trade group. “Business investment and exports have led the recovery thus far; however, recent indicators suggest that the robust manufacturing recovery has lost momentum,” warned economist T. Kevin Swift in ACC’s midyear outlook report. He predicted that U.S. chemical output will be 4% higher this year than in 2010.

PPG Industries’ coatings business suffered a difficult April, when its automobile manufacturing customers were hit with production stoppages due to the March earthquake and tsunami in Japan. In addition, bad weather hampered architectural painting in the U.S., and one of PPG’s larger customers went bankrupt. But in contrast to the coatings performance of other firms, PPG raised quarterly revenues 15% compared with last year by using May and June to increase sales volumes and prices.

Another company that beat the volume blahs was Eastman Chemical, which sold 15% more in its largest segment—performance chemicals and intermediates—than in the second quarter of 2010. It also raised prices by 19%.

Eastman reported that its plasticizer and acetyl chemical product lines were in particularly high demand. It said the higher selling prices were in response to higher raw material and energy costs, strengthened demand in the U.S., and tight industrial supply. Overall, Eastman’s sales soared 26% compared with the year-ago quarter, while its earnings rose 40% to $200 million.

Albemarle posted gains similar to Eastman’s for the quarter. The company raised sales 25% to $742 million and earnings by 39% to $114 million. Most of the increase was driven by higher prices, but the firm’s catalyst and fine chemistry businesses also saw higher volumes, though Albemarle did not disclose the amount of the increase.

Chemtura returned to the C&EN survey with two strong quarters of postbankruptcy results. The refreshed company had earnings of $51 million for the quarter on sales of $876 million. Its largest segment, industrial performance products, saw an increase in demand-driven volume. But sales of its consumer products lines dropped 11% as a result of slowing consumer purchases and cautious inventory management by mass-market retailers.

Looking ahead, O’Brien said Ashland’s sales will benefit from its pending $3.2 billion acquisition of International Specialty Products, disclosed in early June. “In particular, it will significantly expand our position in higher-margin, higher-growth end markets such as personal care and pharmaceuticals,” he stated in the company’s earnings announcement. “Greater participation in these stable, less cyclical end markets should help lead to more consistent, predictable earnings and cash-flow generation for Ashland.”

Meanwhile, in its earnings report, Lubrizol said that its pending takeover by conglomerate Berkshire Hathaway (C&EN, March 21, page 11) will close within the next few months.

It remains to be seen whether the new chemical company combinations will be stronger in the face of slow growth—or even a possible double-dip recession. The latter is a scenario that ACC’s Swift estimates has a 25% likelihood of happening. “Persistent higher energy prices, the collapse of housing, the supply chain shock emanating from Japan, European debt crisis, U.S. debt issues, uncertainty, and other factors are working against the recovery,” he told reporters on a midyear conference call. “These factors could engender a vicious cycle of financial distress, asset depreciation, and falling incomes, sales, production, and employment.”

Even if the economy stays out of recessionary territory, recent economic indicators suggest that meaningful growth is elusive. In the second quarter, U.S. gross domestic product grew only 1.3%, after first-quarter growth of 0.4%. Consumer spending was flat, and durable goods purchases fell by more than 4% from the first quarter. Spending on nondurable goods did not increase either.

The Institute for Supply Management’s July report on purchasing by manufacturers was equally dismal. Although overall manufacturing activity expanded, the rate of growth slowed, and the index of new orders showed contraction for the first time since June 2009. The chemical products sector was one of seven industries reporting contraction in July.

Regardless of the end market or state of the economy, chemical firms will be primarily looking overseas for growth during the remainder of 2011 and beyond. Chemtura, for example, is investing in a multipurpose manufacturing facility in Nantong, China, which CEO Craig A. Rogerson says will help improve profits. And even if the global economy does not catch fire, the weakened dollar makes for a strong export market.

In his comments to investors, Rogerson acknowledged that demand in the short term is not ensured. “While we are closely monitoring our customers for indications of slower macroeconomic demand, we remain optimistic about our prospects for the second half of the year and our ability to deliver continued year-on-year improvement.” 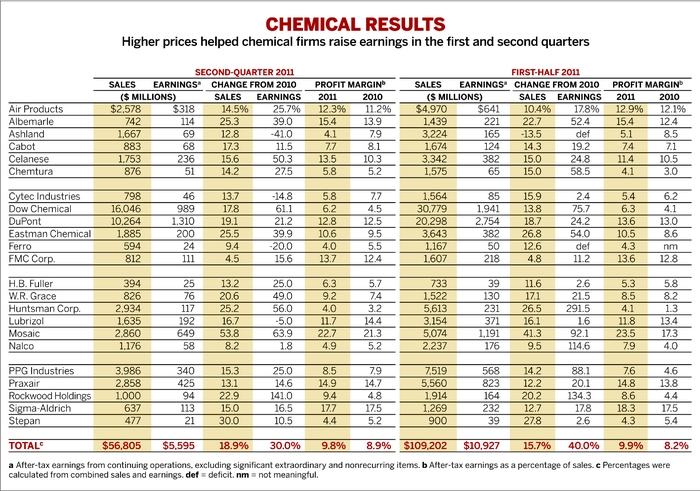