Revolutionary
Credit: Filmed and edited by Kirk Zamieroski for C&EN
Lawrence Principe, professor of organic chemistry and the history of science at Johns Hopkins University, studies late-medieval and early-modern alchemy to answer questions about how modern-day chemistry developed.

When Lawrence M. Principe tries to reproduce someone else’s experiment, he doesn’t turn to the Materials & Methods sections of articles published in the likes of the Journal of the American Chemical Society. Instead, he might travel to a library in Paris, dig up a 17th-century letter or lab notebook, and try to decipher the encoded writing scrawled across their pages. He might also interpret cryptic images of animals and objects printed on old woodcuts.

Principe, a professor of both organic chemistry and the history of science at Johns Hopkins University, researches and reconstructs the lab work of late-medieval and early-modern alchemists with the goal of understanding their motives, what they actually knew, and how they helped shape modern-day chemistry.

“If I’m reading an alchemical text,” Principe says, “I can understand more or less what the author is describing” with a little translation. But after actually carrying out the experiment in his small fume hood at Johns Hopkins, he adds, “there are so many more levels of meaning that become clear, and you understand more of what the author is about.”

Principe became fascinated with the secretive world of alchemists as early as his time in high school, when he came across a simplistic book on the topic. Since then, he’s attained a Ph.D. in organic chemistry from Indiana University, earned another Ph.D. in the history of science from Johns Hopkins, and written a few books of his own revealing some of the figures behind the magical myths—famous chemist Robert Boyle is among them—and why these experimentalists were so covert.

With the goal of making gold from cheap materials, alchemists, unsurprisingly, were a cryptic bunch, Principe says. “There are lots of examples of alchemists who claimed success and then found themselves arrested and imprisoned in the lab of some prince or king” who wanted the knowledge for himself, he adds. In addition, alchemy was illegal in parts of Europe because of a fear that alchemical gold would debase nations’ currencies.

As a result of their powerful know-how, alchemists wrote in riddles, under false names, and eventually, in the 15th through 17th centuries, in pictorial images. For instance, a red dragon in one of the pictures might represent nitric acid: It is corrosive, breathes fire, and devours everything around it, Principe explains. 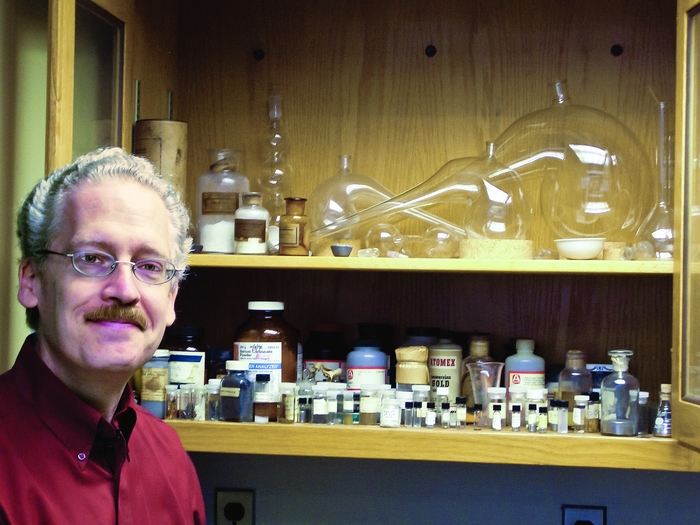 By the early-18th century, however, alchemists had become personae non gratae in the world of science. A lot of fraudulent characters claiming to be able to make gold tarred the reputations of those doing careful experiments, Principe says. So at that time, chemistry, which was populated with alchemists and nonalchemists alike, had a tainted public image.

To improve their status and be taken seriously as professionals, nonalchemists who practiced the central science ostracized their gold-seeking colleagues, portraying them as charlatans to distinguish between the two endeavors, Principe says. Some maintained their distance from alchemy in public but continued to practice behind the scenes.

So alchemy became the stuff of myth, magic, and trickery until a recent history-of-science revolution led by Principe and a few others. These scholars strive to restore alchemists’ reputations as serious experimentalists who actually knew their chemistry and made significant discoveries.

In the early days, “I was a voice crying in the wilderness,” Principe says of his passion for revealing a more accurate version of alchemy. But the revolution is currently taking place because “the history of science has grown as a discipline,” he adds. Rather than just seeking to identify who did what first, as was done in the past, science historians are now more interested in determining where scientific ideas come from, he says.

“To answer that question,” Principe asserts, “we have to look at the things that early generations just threw away as being unimportant.” Things like astrology and alchemy.

“What I want to do is present people with a truer vision of the past,” Principe says. To uncover the history of chemistry, he argues, scholars have to go into the lab and get their fingers dirty. For Principe, this means boiling mercury in his basement fume hood.

Uncovering the true history of chemistry is also important from an education standpoint, Principe believes. Too often, young students are taught that a few great thinkers clarified everything and developed the basic tenets of science. “I think that dissuades students from going into science,” Principe says. “If you have a more accurate depiction of science, one where it’s fallible human beings struggling to understand things and making mistakes along the way, that’s more truthful.” And it’s more inviting, he adds.

Principe does his part to encourage students to study science by living what he calls a schizophrenic life in both the chemistry and history of science departments at Johns Hopkins. “I have interesting days where I go and teach carbonyl chemistry in the morning, and then in the afternoon, I teach medieval astrology” across campus, he says. “I’m using both sides of my brain, and I’m very lucky.”

Synthesis
Berlin exhibit features alchemical oddities from around the globe
Education
James T. Grady-James H. Stack Award For Interpreting Chemistry For The Public: Peter Atkins
Education
A Chemist’s Drama, ‘The PHD Movie’ Sequel
Share X
To send an e-mail to multiple recipients, separate e-mail addresses with a comma, semicolon, or both.
Title: Lawrence Principe
Author: Lauren K. Wolf
Chemical & Engineering News will not share your email address with any other person or company.

Comments
Matt Smith MD (May 23, 2015 9:31 AM)
Dr. Principe is amazing!
I was a student of his at Indiana University when he was working on his PhD. He is perhaps the most awe enspring instructor that I have come across in my life. His passion for teaching and science cannot be matched. It has been almost 30 years since I was his student and I still talk about him today with my patients about how one person can influence your life in so many ways and for so many years. He is a self declared last of the true indoorsmen. Thank you Larry. Im sure you continue to touch the lives of all those around you.
Matt Smith MD
Clermont, FL
Reply »