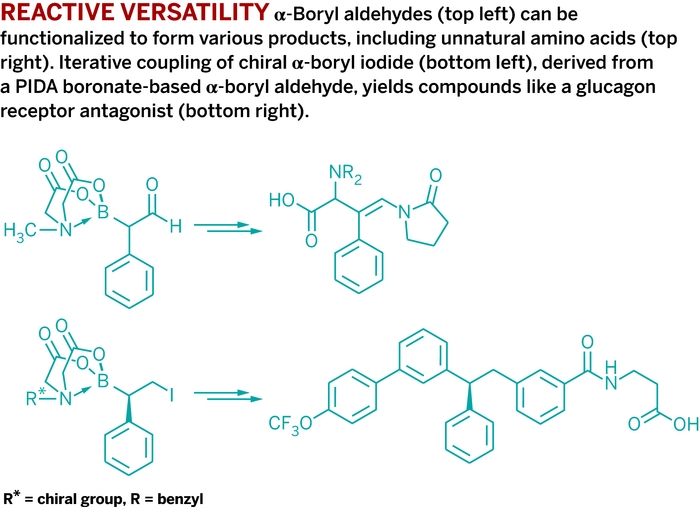 Two studies report the first isolation of α-boryl aldehydes, bifunctional reagents that facilitate synthesis of organic compounds that were previously difficult or impossible to make. The work could enable nonexperts in synthesis to rapidly compose complex organic molecules from simple building blocks in an automated manner—similar to the way peptides are made today.

Beryl Shift
[+]Enlarge
MIDA boronate epoxide (left) forms an alpha boryl alderhyde (right) by transfer of boryl group from one epoxide carbon to the other.

MIDA boronate epoxide (left) forms an alpha boryl alderhyde (right) by transfer of boryl group from one epoxide carbon to the other.

α-Boryl aldehydes are usually extremely unstable, but newly discovered stable ones are now stored in bottles in Andrei K. Yudin’s lab at the University of Toronto and Martin D. Burke’s lab at the University of Illinois, Urbana-Champaign. Zhi He and Yudin and, independently, Junqi Li and Burke discovered the stable α-boryl aldehydes serendipitously while carrying out other reactions, found that they form by a new type of rearrangement, and used them to create numerous organic products (J. Am. Chem. Soc., DOI: 10.1021/ja205910d, 10.1021/ja205912y).

These aldehydes contain two functional groups that can react independently: a nucleophilic boryl carbon and an adjacent electrophilic aldehyde. He and Yudin found that stable α-boryl aldehydes can form when a boryl group on an N-methyliminodiacetic acid (MIDA) boronate epoxide moves from one epoxide carbon to the other and the epoxide opens to form aldehyde.

He and Yudin functionalized the α-boryl aldehydes to form heterocycles, alcohols, olefins, enamines, α-boryl acids, alkenyl triflates, and other compounds, including unnatural amino acids. Most of these products retain the boryl group, which can be further manipulated synthetically.

MIDA boronates were developed earlier by Burke’s group, and about 75 of them are commercially available from Sigma-Aldrich as modular agents for coupling reactions. In the new study, Li and Burke developed a chiral version of MIDA—pinene-derived iminodiacetic acid (PIDA). They found that the ligand facilitates stereoselective epoxidation of vinyl boronates and that the resulting PIDA boronate epoxides form chiral α-boryl aldehydes via the same unprecedented epoxide rearrangement.

“That α-boryl aldehydes are stable is a surprise, and that they can be made easily and in a stereocontrolled fashion is icing on the cake,” comments synthetic organic chemist James P. Morken of Boston College. “The range of transformations already developed by the Burke and Yudin groups clearly shows these building blocks will enable new synthesis strategies,” he remarks.

Asymmetric synthesis specialist Cathleen M. Crudden of Queen’s University, in Kingston, Ontario, adds that “with Burke’s use of chiral versions of MIDA boronates to generate carbon-boron bonds with control of chirality and Yudin’s demonstration of the amazing number of reactions these species can undergo, it is clear these reagents dramatically expand the scope of compounds that can be made using boron chemistry.

Synthesis
Indolines made easy
Catalysis
Strained reagent opens up new cross-coupling reactivity
Synthesis
Amides Succumb To Suzuki–Miyaura Coupling, Thanks To Nickel Catalyst
Share X
To send an e-mail to multiple recipients, separate e-mail addresses with a comma, semicolon, or both.
Title: Prefab Synthesis Moves Ahead
Author: Stu Borman
Chemical & Engineering News will not share your email address with any other person or company.