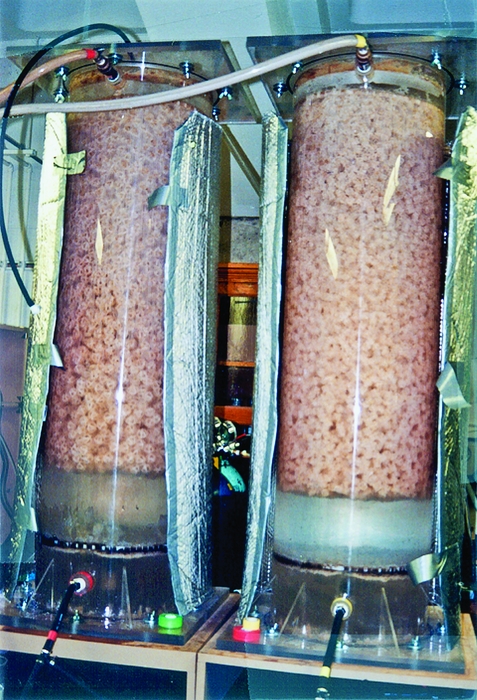 As water passes through soil, natural populations of bacteria help cleanse the liquid of contaminants such as nitrate, perchlorate, and chlorinated organic compounds. Now, two water utilities in California are capturing those bacteria, allowing them to create biofilms in reactors, and using the biofilms to purify water in a concentrated, controlled manner in drinking water treatment plants. 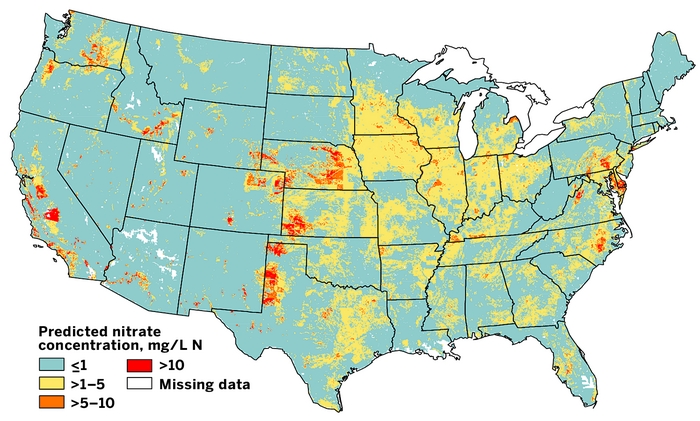 The approach is commonly known as biodenitrification, although the bacteria can break down compounds other than nitrate. European water agencies have used biological purification for years to treat drinking water, as have U.S. utilities to treat wastewater. U.S. agencies have been reluctant to use it for drinking water, however, because they tend to be conservative and have been more comfortable using chemical or physical methods, in particular ion exchange or reverse osmosis, to remove contaminants, says Jack Safely, director of water resources at Southern California’s Western Municipal Water District, which is headquartered in Riverside.

But ion-exchange and reverse-osmosis systems consume a lot of energy. They also yield brine waste streams that can be expensive to discard, says Todd S. Webster, Envirogen Technologies’ vice president for the western region. Perchlorate is particularly tricky, he adds, because it is difficult to cost-effectively regenerate perchlorate-contaminated resin on-site.

Meanwhile, water treatment systems are having a harder time meeting state and federal drinking water standards. Data from the Environmental Protection Agency, for example, show increasing reports of drinking water exceeding the nitrate maximum contaminant level of 10 mg/L N (44 mg/L NO3–) from 1998 to 2008. Nitrate in drinking water can cause oxygen deprivation in infants and is associated with several cancers. The agency is currently working on setting new limits for perchlorate and several organic compounds such as trichloroethylene and perchloroethylene in drinking water (C&EN, Feb. 7, page 6).

Biological water purification holds the promise of targeting many of these contaminants in one reactor, without generating costly waste streams.

The basic structure of bacteria-based treatment systems is that a reactor is set up with some sort of media on which the bacteria can grow. Bacteria that naturally populate the water are then allowed to grow in the reactor. With a little help from some added phosphate and an electron donor—commonly acetic acid, although alcohols, sugars, or H2 also work—the bacteria can then break down compounds they come across in the water.

After the water passes through the biological treatment reactor, it’s filtered (“polished”) and chlorinated as usual for disinfection. Although studies show that the bacteria are typically nonpathogenic, Safely says, utilities still need to kill any microorganisms that might escape the reactor before the water can be delivered to consumers. Crucially, the treatment process produces no brine or other waste: Nitrate, for example, gets reduced to N2 and H2O, whereas perchlorate is transformed to Cl– and O2.

A group called Nitrate Removal Technologies constructed one biodenitrification plant for drinking water in Coyle, Okla., in the 1990s, says JoAnn Silverstein, a professor of environmental engineering at the University of Colorado, Boulder, who was involved in the project. The Coyle system, based on pilot facilities Silverstein tested in Colorado, was developed to remove nitrate from rural community well water contaminated by fertilizer or animal waste. Bacteria in the system were grown on a porous plastic medium in a fixed-bed reactor that the water flowed through.

Coyle, which had a population of about 300, used the plant successfully for a couple of years, Silverstein tells C&EN, noting that the system was “cost-effective, but not free.” Consequently, when the town found a new, deeper water supply with lower nitrate levels, it started using that and shut down the treatment plant.

Biological purification of drinking water then largely dropped out of notice until the mid-2000s, Silverstein says, when larger communities started to have serious problems with nitrate and other biodegradable contaminants. Now, Western Municipal and another California utility, West Valley Water District, are developing full-scale plants to target nitrate and perchlorate.

Western Municipal piloted a fixed-bed bioreactor using granular activated carbon media and plans to construct a full-scale system. The fixed-bed design promotes specialization of bacteria in different parts of the bed, says Jess Brown, director of R&D at Carollo Engineers, which is designing Western Municipal’s system. “Most bacteria will take oxygen first as an electron acceptor, then nitrate, then perchlorate, and then various organic compounds,” Brown says. In the bioreactor, the bacteria at the start of the bed will get the nitrate, while colonies farther down will take on harder-to-reduce compounds.

In its pilot bioreactor, Western Municipal treated water containing nitrate at levels of about 70 mg/L N. The system removed nitrate down to less than 10 mg/L N in regular operation. The water also contained 6 µg/L perchlorate, which the bioreactor reduced to less than the limit of detection of 4 µg/L. And the microbial treatment reduced dibromochloropropane, an agricultural pesticide used in the area, from 0.025 µg/L to less than 0.010 µg/L.

“The good thing about this process is that you get multiple contaminants in one treatment, as opposed to some of the ion-exchange processes that really target one constituent more than another,” Safely says. He estimates that the cost of operating the biological treatment plant is about the same as for ion exchange, without considering waste treatment necessitated by the ion-exchange process. Western Municipal has secured money from EPA to design a large-scale plant to treat 2 million gal/day; Safely estimates that the plant will ultimately cost about $11 million. The utility delivers about 90 million gal/day to its customers.

In the Rialto tests, the pilot reactors purified water that had perchlorate levels of around 50 µg/L; California’s maximum permitted level for that contaminant is 6 µg/L. Both bioreactors reduced perchlorate to nondetectable levels.

On the basis of the Rialto results, Envirogen and West Valley Water District, which serves part of the city, secured $16 million from the California Department of Public Health, the State Water Resources Control Board, and the U.S. Department of Defense to build a full-scale system. Construction started in April on a plant to treat 3 million gal/day. West Valley delivers about 17.5 million gal/day to its customers.

After the plant is completed next summer, it will take about 3 to 9 months to go through various testing protocols for the Department of Public Health, says Tom Crowley, West Valley’s assistant general manager. West Valley hopes to have the final permit and be able to start delivering water treated by the plant to customers by the beginning of 2013.

Crowley believes that bioreactors will be a key part of water management in the future. West Valley and Western Municipal are among many water agencies having to look at bringing contaminated wells into service to meet local water demand. And with the desire to tap such sources comes the need to consider new, cost-effective ways to purify the water they contain.