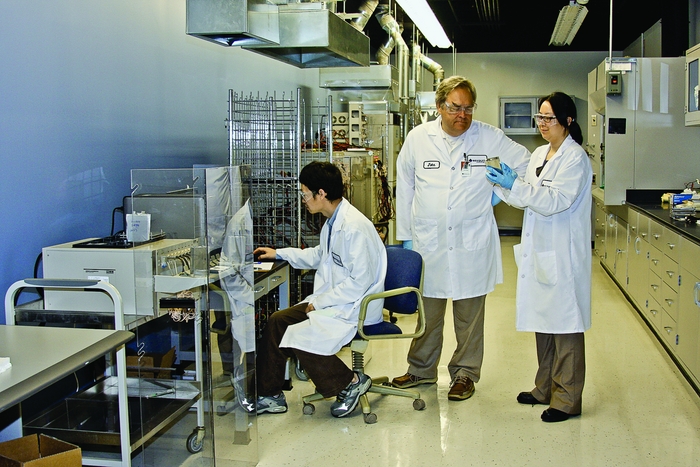 As projections of global demand for large lithium-ion batteries soar, battery manufacturers are working to build up capacity in the U.S. Not far behind them, chemical companies see opportunity in supplying the high-purity electrolytes and electrolyte raw materials that are critical to battery performance.

In The Flow
[+]Enlarge
Electrolyte solutions of lithium salts and solvents carry lithium ions from the anode to the cathode.SOURCE: U.S. Department of Energy 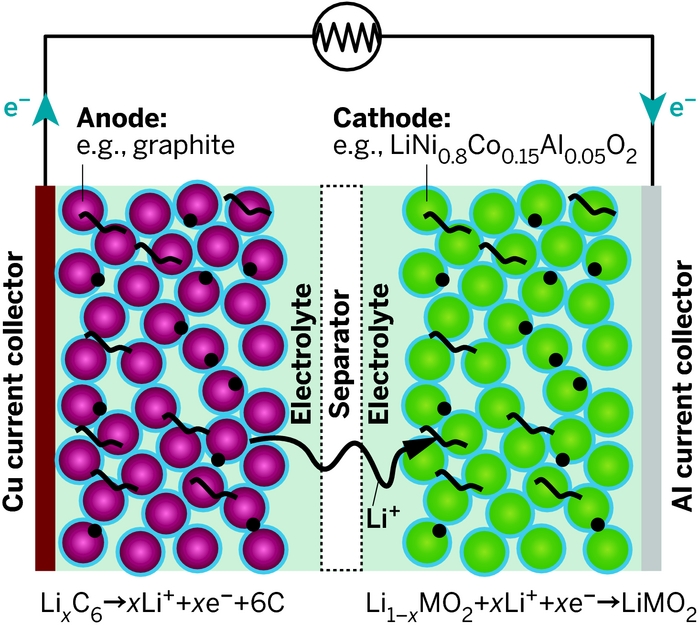 Electrolyte solutions of lithium salts and solvents carry lithium ions from the anode to the cathode.SOURCE: U.S. Department of Energy

The world’s two largest chemical companies, BASF and Dow Chemical, both recently disclosed plans to enter the electrolyte market. They will be competing with firms in Japan, Taiwan, and China that have been in the business for decades. To help it get a leg up, Dow has formed a joint venture with Japanese electrolyte maker Ube Industries. For its part, BASF says it will leverage its experience making electrolyte chemicals and other battery components. It is already building a cathode facility in Elyria, Ohio.

Electrolytes are blends of lithium salts, solvents, and proprietary additives that conduct lithium ions between a battery’s anode and cathode. Some companies specialize in making the salts, the most common of which is lithium hexafluorophosphate (LiPF6). Other firms supply the solvents, usually cyclic and linear carbonates.

Today, battery electrolytes can’t be made completely from materials sourced in the U.S., but that is likely to change in the next few years. Honeywell has completed work on a sample plant for LiPF6 in Buffalo. The company has said it will build a production site by 2013, likely in Illinois. And Huntsman will expand its capability to make cyclic ethylene and propylene carbonates at its plant in Conroe, Texas. It is also investigating a new North American plant where it would make both cyclic and linear carbonate solvents.

Analysts say that growing demand for lithium-ion batteries, both for electric vehicles and stationary storage of energy from wind and solar farms, will create a market where suppliers of electrolytes and their raw materials will likely find success. But the overall shape of a U.S. electrolyte industry is still murky, cautions Kevin See, an analyst at market intelligence firm Lux Research.

“The supply chain is in flux right now. Battery makers like Samsung and LG are trying to vertically integrate as much as possible to capture as much value as they can,” he points out. LG Chem, in fact, is building an electrolyte facility next to its battery plant in Troy, Mich. So firms such as Dow and BASF will have to consider other potential customers that are not so vertically integrated.

In the process, the two chemical giants may look to edge out Novolyte Technologies, currently the only large-scale U.S. producer of electrolytes for lithium-ion batteries. “Novolyte already has a relationship with manufacturers, but Dow plus Ube is a formidable competitor,” See says.

In a bid to strengthen its competitive position through integrated production, a year ago Novolyte formed a joint venture with Foosung, a South Korean maker of lithium salts.

It is not yet clear how much of the global demand for lithium-ion batteries will be met by U.S. battery makers, but domestic manufacturers will opt to buy their electrolytes from U.S. producers, rather than from the Asian firms that dominate today, experts forecast.

One obvious potential customer for the Dow-Ube joint venture, called Advanced Electrolyte Technologies, is a second Dow joint venture, Dow Kokam, which is building a battery facility in Midland, Mich. David Klanecky, head of energy materials for Dow, hopes Dow Kokam will be a customer, but he emphasizes that “they are a separately operated entity with their own business model and board. We will make sure the material we produce will be qualified in their facilities. But we will also tap into other cell manufacturers such as Johnson Controls in the Michigan and Ohio region.”

In addition to lining up a customer base, Dow and other electrolyte suppliers will need to offer technology advantages and help customers differentiate their batteries, Klanesky says. “Electrolytes are one of four main battery components, along with cathodes, anodes, and separators. They all function together very tightly as a system. The overall R&D pipeline is across all of those materials to maximize energy density, cycle life, and battery life span.”

Choosing an improved technology path will be a necessity, because the industry will not grow as expected unless batteries improve, adds Alan Nelson, who leads R&D for Dow’s energy materials business. But it is also a gamble. “For transportation applications, we haven’t sorted out yet as an industry what we need for battery performance and infrastructure, including charging stations,” he says, noting that different companies will place bets on different technologies.

BASF is staking out a position with advanced formulations, says Markus Hölzle, general manager for battery materials. “The higher the quality and purity, and the more tailored to the purpose battery materials are, the more durable and capable the battery is,” he explains. Additives in the electrolyte can improve battery function by forming protective layers on cathodes and anodes, reducing flammability, and increasing tolerance for low operational temperatures.

Like Klanecky, Hölzle emphasizes the important link among the different battery components, and he touts parallel development as the way to achieve higher energy densities. For example, BASF is planning to optimize electrolytes to function with newer cathode material designs based on the nickel, cobalt, and manganese technology the firm has licensed from Argonne National Laboratory.

As a supplier to electrolyte makers, Huntsman has an enviable position as the only U.S. manufacturer of the must-have ingredient ethylene carbonate, according to Nick Kob, technology manager at the firm. Ethylene carbonate is considered a mandatory input because it both dissolves lithium salts and helps form a protective solid interface on battery electrodes. This layer prevents the electrode materials from dissolving in the soup of compounds that forms during discharge and recharge.

Linear carbonates are added to the electrolyte to ensure that it stays liquid at low temperatures. At the moment, Kob points out, “linear carbonates are all made in Asia; not one drop of it is made in the U.S. for commercial batteries.” Huntsman wants to produce both types of carbonate at a plant it intends to construct in the next three to five years.

Making the ultrapure solvents requires significant expertise, Kob says. “Quality requirements have gone through the roof, driven by the expectation of high costs for replacing an electric-car battery.” Having suppliers close by, rather than in China, will give electrolyte and battery makers more confidence in the purity of the solvents, Kob suggests.

In the future, however, electrolytes may be developed that do not require carbonate solvents, says Barry Misquitta, vice president of energy storage at Novolyte. The firm has developed new solvent formulations that work at power levels below 4.5 V, and it has set its sights on a 5.0-V formula. Current lithium-ion batteries max out at 4.2 V, but all-electric car applications are expected to require a 5.0-V battery.

The new electrolyte makers agree that they will need to participate in battery innovation, regardless of how far it moves electrolyte formulations from where they are now. And eventually, to maintain growth and competitiveness, they will need to plug into the global market. Novolyte has already planned for this and has long had manufacturing operations in China.

“BASF—even as a later entrant into the market—sees large business opportunities for battery materials as well as for future battery concepts such as lithium-sulfur or lithium-air,” Hölzle says. And Dow’s Klanecky says the partnership with Ube will bring global reach. “We plan to build capacity here initially,” he says. “But this joint venture will be operated from a global perspective. We will grow in those other geographies as well.” ◾