Agent invites itself into the brain and then inhibits HIV enzyme

Breakdown
[+]Enlarge
In the reducing environment of cells, abacavir dimer (top) converts to two molecules each of abacavir (bottom left) and a thiol (bottom right). 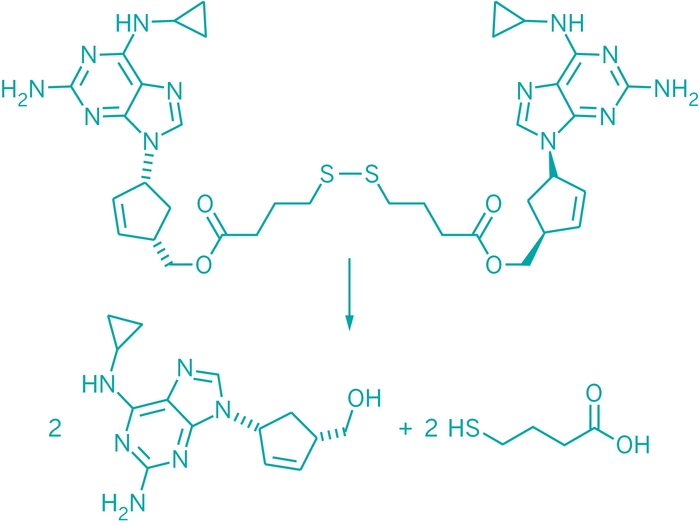 In the reducing environment of cells, abacavir dimer (top) converts to two molecules each of abacavir (bottom left) and a thiol (bottom right).

A new approach to fighting HIV might improve current therapies by helping to eliminate reservoirs of virus in the brain, a feat that existing drugs have failed to accomplish.

The use of anti-HIV drug cocktails is the current standard of care in treating the virus, the ultimate goal being to eliminate all traces of virus in the body. But many HIV drugs have difficulty passing the blood-brain barrier and entering the central nervous system, therefore leaving untouched reservoirs of HIV in brain cells.

A key component of the blood-brain barrier is the transporter protein P-glycoprotein (P-gp), which acts like a pump to expel drugs from blood-capillary endothelial cells. Chemical biologist Jean Chmielewskiand biochemist Christine Hrycyna of Purdue University and coworkers have now created an agent that acts like a Trojan horse: It gains entry to the brain by turning off P-gp, thereby opening the blood-brain barrier, and then converts to an anti-HIV drug in brain cells (J. Am. Chem. Soc., DOI: 10.1021/ja206867t).

The agent consists of two molecules of the commercial anti-HIV drug abacavir tethered by a linker. The abacavir dimer inhibits P-gp and turns off the drug efflux in endothelial cell membranes that functioning P-gp induces. With that pump inactive, the dimer and other drugs in HIV cocktails can enter the brain. In the chemical environment of brain cells, a disulfide in the tether is reduced to two thiols, unraveling the dimer and releasing abacavir. Abacavir then breaks down to carbovir triphosphate, the form in which it inhibits a critical HIV enzyme known as reverse transcriptase.

“The concept of inhibiting P-gp to improve drug penetration is not novel, but the chemistry here is innovative,” says National Cancer Institute lab chief Michael M. Gottesman, a pioneer of P-gp research. “This kind of approach may prove useful clinically to eradicate HIV reservoirs in the brain.”

“It remains to be seen if abacavir dimers inhibit P-gp efflux of abacavir or other anti-HIV drugs to any greater extent than existing constituents” of HIV cocktails, like ritonavir, which also inhibits P-gp, says Sarah A. Thomas, a blood-brain barrier specialist at the Institute of Pharmaceutical Science, King’s College London. However, she says, “the use of a modified HIV drug as a specific [P-gp] inhibitor is an exciting idea,” and the data presented by the Purdue researchers “provide a strong case in support of its further development.”

Although ritonavir also inhibits P-gp, “it has a number of off-target protein interactions and extensive undesirable drug-drug interactions,” Chmielewski says. “Ritonavir is also known to up-regulate P-gp expression”—which is counterproductive because it tends to promote P-gp-induced drug efflux. Hence, “the door is wide open for other innovations in the area of P-gp inhibition,” such as the new dimeric agent, she says.

Another potential problem is that P-gp is ubiquitous in the body, so inhibiting P-gp systemically could be toxic, some researchers believe. However, Hrycyna says that idea “is a common misconception. The pharmaceutical industry is already using ritonavir as a P-gp inhibitor. A number of other therapies, like cyclosporine, are also P-gp inhibitors. P-gp-negative collies and P-gp-knockout mice live healthy lives. We clearly realize that it may be optimal to not permanently disable P-gp,” but the abacavir dimers break down and thus do not cause long-term P-gp inhibition.

The dimer concept could have implications beyond HIV treatment. The researchers note that the approach “can be readily applied to other therapies with limited brain penetration due to P-gp efflux, from the anticancer agents topotecan and Taxol to the anti-schizophrenia drugs quetiapine and paliperidone.”

Chmielewski says the group is “gearing up to look at in vivo brain penetration with these agents.”