[+]Enlarge
Credit: Adapted from Science
This 3-D plot, based on data from a library of compounds (black dots), shows the effect of sterics and electronics on ligand performance; compounds at the red peak are the most effective. 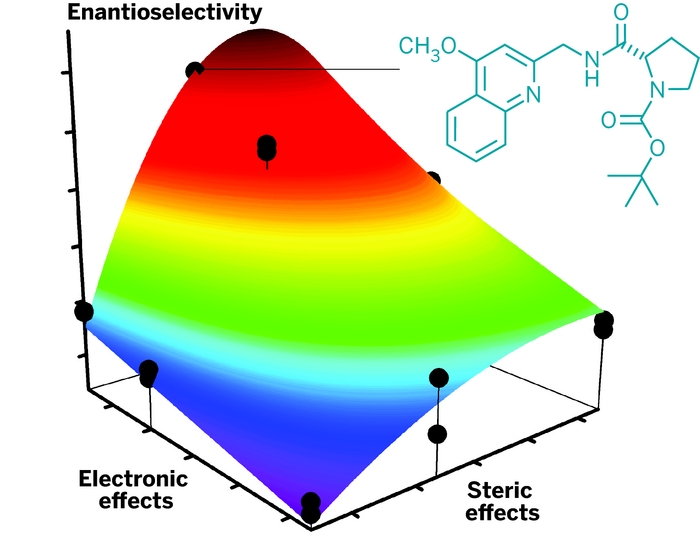 Credit: Adapted from Science
This 3-D plot, based on data from a library of compounds (black dots), shows the effect of sterics and electronics on ligand performance; compounds at the red peak are the most effective.

By taking a mathematical approach, chemists have developed a method that zeroes in on the optimum properties of catalysts for a given reaction. The new method uncovers relationships between catalysts’ chemical properties that normally are difficult to detect (Science, DOI: 10.1126/science.1206997).

Those hidden relationships, say the researchers who developed the approach, can be crucial determinants of catalyst efficiency.

They note that industrial chemists, drawing on small sets of completed experiments, have often used math to predict optimum reaction temperatures and concentrations, thereby reducing the number of experiments they must try before they achieve their desired result.

“We took that process and adapted it to look at classic physical organic parameters of catalysts,” including steric and electronic effects, says Matthew S. Sigman of the University of Utah.

Sigman and graduate student Kaid C. Harper sought catalysts for a reaction that forms chiral alcohols. They tested a small, diverse library of ligands in the reaction, and on the basis of those results, developed an equation to predict optimal catalyst characteristics for that reaction.

The equation helped them eliminate a poorly performing ligand class and develop alternatives with quinoline and proline moieties that gave better results. The equation indicated, and the researchers confirmed experimentally, that electron-rich ligands’ performance varied greatly with size, whereas electron-poor ligands of all sizes worked uniformly poorly. “It’s not something we would’ve predicted, but it’s extremely important for understanding catalysts in the future,” Sigman says.

University of Pennsylvania organic chemist Marisa C. Kozlowski says researchers have noticed relationships like the ones Sigman observed, but identifying and optimizing catalyst systems with such relationships has been challenging. She praised Harper and Sigman’s method as an easily accessible way to address that issue.

Chemists can recalculate the equation for other reactions of interest with a standard mathematical software package, Sigman notes.