[+]Enlarge
Credit: U.S. Army
The final 1-ton container of mustard agent was destroyed at the Anniston Army Depot in May. 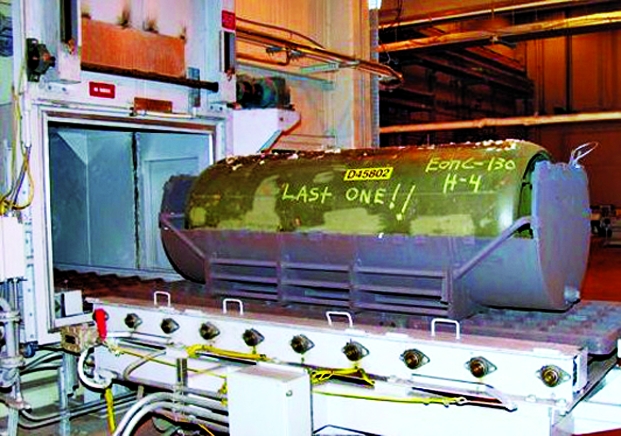 Credit: U.S. Army
The final 1-ton container of mustard agent was destroyed at the Anniston Army Depot in May.

The Army says it has completed the destruction of the chemical weapons stockpile at its disposal facility in Anniston, Ala. The original inventory at the military depot included 661,529 nerve-agent-filled and mustard-agent-filled munitions and 2,254 tons of chemical warfare agents. Disposal operations using incineration and explosive destruction technologies began at Anniston in 2003. Decontaminating, dismantling, and closing the storage units that held the chemical agents are expected to take up to two years. The Army established the Chemical Demilitarization Program in 1986 to remove the danger posed by the storage of obsolete weapons. Chemical munitions and agents were previously eliminated at installations in Edgewood, Md.; Newport, Ind.; Pine Bluff, Ark.; and Johnston Atoll in the Pacific Ocean, about 800 miles southwest of Hawaii. Workers in Tooele, Utah, and Umatilla, Ore., are nearly finished destroying the chemical weapons stored at those sites. Disposal operations have not yet begun at the two remaining weapons depots in Blue Grass, Ky., and Pueblo, Colo. Under an international treaty the U.S. ratified in 1997, all of the nation’s chemical weapons are to be eliminated by April 2012, but the U.S. has acknowledged it will not meet that deadline.