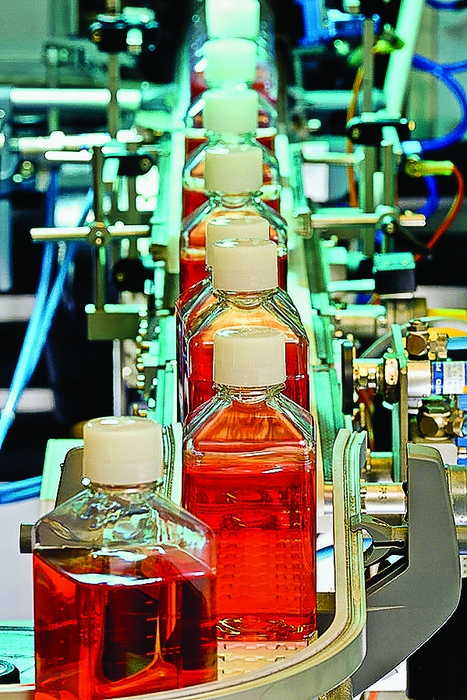 Gilles Cottier, president of Sigma-Aldrich’s SAFC division, wants his business to reach $1 billion in annual sales in the next four years, prior to any acquisitions he might make. Although SAFC is known mostly as a fine chemicals producer, Cottier is counting heavily on a product for the biologics industry—cell culture media—to help meet his goal.

Cell culture media are relatively simple products made under highly exacting conditions. A liquid or dry mixture of salts, sugars, amino acids, hormones, and other ingredients, media are food for cells. They support the growth of cells that are being nurtured in bioreactors for their ability to express pharmaceutical proteins such as antibodies and vaccines.

By most accounts, St. Louis-based Sigma-Aldrich is the world’s number two media manufacturer afterLife Technologies. The company was only a small player in the business until 2005 when it acquired JRH Biosciences for $370 million and added $150 million in annual media sales to SAFC. The firm doesn’t disclose current media sales.

The expanded media business struggled in its first couple of years under Sigma-Aldrich’s ownership, Cottier acknowledged in an interview at the firm’s cell culture plant in Irvine, Scotland.

One of its main products at the time was fetal bovine serum, a by-product of the beef industry that is also a robust cell growth medium. In the wake of the bovine spongiform encephalopathy, or mad cow disease, crisis of the 1990s, the U.S. Food & Drug Administration pushed the drug industry to switch to animal-free forms of media, and Sigma-Aldrich’s business suffered while the firm regrouped.

But by 2009 and 2010, its media sales were increasing at double-digit rates, Cottier said, helping SAFC reach overall sales of $647 million last year. And Sigma-Aldrich recently singled out the cell culture media business as a top contributor to SAFC’s 13% first-half 2011 sales growth compared with the same period last year.

SAFC’s media business is doing well even though the firm lacks the range of services for the biologic drugs industry that some of its competitors offer. Life Technologies, for example, also sells chromatography columns for protein purification and instruments for contamination and purity testing. GE Healthcare recently acquired the cell culture media manufacturer PAA Laboratories so it can provide customers with both “upstream” cell growth products and “downstream” separation and polishing equipment. GE also produces disposable plastic bioreactors.

SAFC has no intention of offering such equipment and instruments, Cottier said. “Our strength is chemicals and biology,” he declared. “This is what we do. This is what we are good at.”

The focused strategy makes sense to Wolfgang A. W. Noe, senior consultant at BioProcess Technology Consultants. “Cell culture media is the most critical business in biotech,” he said. “I’d prefer to deal with a specialist in this area rather than a generalist.”

Noe marvels at the evolution of cell culture media from undefined mixtures containing agricultural by-products to products in which all components are animal-free and carefully characterized. Yet he says more progress is needed. Many of the salts, sugars, and amino acids added to media are manufactured for the nutrition industry, which has less stringent quality standards than the pharmaceutical industry. “We have struggled for years with our higher quality requirements,” he said.

Indeed, quality deficiencies can wreak havoc in biologics manufacturing. Cottier pointed to the protracted problems Genzyme experienced at its Allston, Mass., plant last year due to viral contamination. “When this stuff happens it spells disaster,” he said. While weakened by the contamination crisis, Genzyme became the subject of a hostile takeover bid by Sanofi, a drug industry rival.

On a tour of the Irvine facility, engineering manager Kenny Ringland emphasized the measures SAFC takes to ensure a sterile manufacturing environment. Reporters donned booties, hairnets, and Tyvek suits just to walk through the plant’s halls and peer through viewing windows into the production suites. The firm’s media raw materials are U.S. Pharmacopeial Convention (USP) grade, he said, and most of them are sourced from Sigma-Aldrich’s own laboratory supply business.

The tour took the reporters through the Irvine facility’s newest production wing, which opened in February. Over the past 18 months, Cottier said, Sigma-Aldrich has invested $20 million across its three cell culture media facilities as part of a $100 million spending program at SAFC.

A longtime Sigma-Aldrich employee, Cottier has been on the chemistry side of pharmaceutical manufacturing longer than the biology side. But he knows that biology will be important to SAFC’s future growth. “Biological drugs are going to grow faster than small molecules,” he said. “We see opportunity in technology that will improve the efficiency of the drug, increase the yield, and increase the safety of the products we are selling.”

Mergers & Acquisitions
Danaher will acquire GE’s biopharma business
Biologics
AGC triples US biologics capacity
The Making Of MilliporeSigma
Share X
To send an e-mail to multiple recipients, separate e-mail addresses with a comma, semicolon, or both.
Title: A Media-Savvy Firm
Author: Michael McCoy
Chemical & Engineering News will not share your email address with any other person or company.