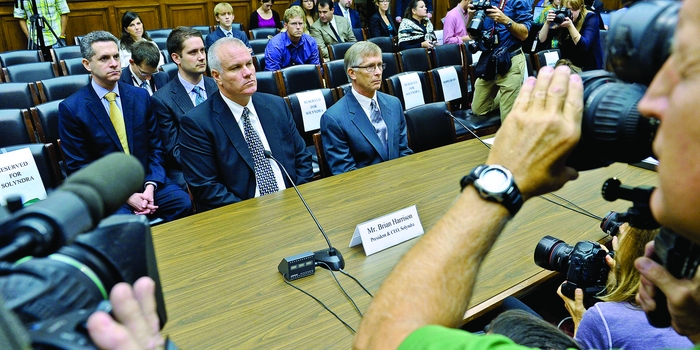 Solyndra has become a lightning rod in a political storm over federal support of emerging clean energy technologies. The solar module manufacturer went belly-up in late August after apparently squandering some billion dollars in investments, a half-billion of which was backed by the Department of Energy’s loan guarantee program.

Congress is scrutinizing the Solyndra case, with a sharp focus on how the company secured federal support. Ties to President Barack Obama and the speed at which the final approval of Solyndra’s loan guarantee was completed are also being called into question on Capitol Hill.

But for Republican leaders in the House of Representatives, Solyndra’s bankruptcy is more than an example of a failed company. Their investigation, they say, has laid bare a biased and mismanaged energy support program run by DOE. In response, DOE has begun tightening the program, causing some companies to lose already-approved guarantees. Clean energy technologists and investors, however, caution that Solyndra is not representative of DOE’s loan guarantee portfolio.

This battle began seven months ago, when the Republican leadership of the House Energy & Commerce Oversight & Investigations Subcommittee began investigating DOE’s support for a $530 million loan guarantee to Solyndra, a Fremont, Calif., manufacturer of a unique tubular photovoltaic solar module. Company officials announced Solyndra would file for bankruptcy on Aug. 31, a little more than a month after they told House members the company was in solid financial shape.

In their investigation, committee Republicans have combed through 35,000 pages of e-mails and documents and selectively released portions appearing to show the Administration had pressured career staff at DOE and other departments to grant the guarantee to Solyndra. However, Administration officials have adamantly denied exerting any such pressure (C&EN, Sept. 19, page 5).

An explosive Sept. 23 House subcommittee hearing was the most recent of several to probe Solyndra and DOE. Only two top Solyndra company officials were asked to testify, but neither answered a single question, as both invoked Fifth Amendment protections against self-incrimination.

Solyndra was the first company to receive a DOE loan guarantee, noted Energy & Commerce Committee Chairman Fred Upton (R-Mich.), as the latest hearing began. He stressed that the financial backing came through a component of Obama’s economic stimulus plan, which is also under criticism from congressional Republicans. The company, he said, was “touted” by the President, vice president, and Energy Secretary Steven Chu as a “model for government investments in green technology. Now, less than two years later, Solyndra has filed for bankruptcy and was raided by the FBI.”

Speaking to the silent Solyndra officials, Upton added, “Let me just warn you and the other folks involved in this taxpayer rip-off: We are not done. No, we’re not.”

Several subcommittee members, led by subcommittee Chairman Clifford B. Stearns (R-Fla.), were particularly angered by personal office meetings Solyndra President and Chief Executive Officer Brian Harrison had with them in July, on the eve of the bankruptcy. In those meetings, Harrison stressed the company’s bright future of booming sales and high production.

Democrats, too, voiced anger with Solyndra’s duplicity and also questioned DOE’s vetting of Solyndra’s viability before offering the loan guarantee. Rep. Henry A. Waxman (D-Calif.), the committee’s ranking minority member noted, however, that DOE was not alone in suffering losses from Solyndra’s bankruptcy: The company obtained more than $1 billion in private venture capital, twice the amount of DOE’s loan support.

Adding heat to the hearing, Waxman also discussed a stream of letters sent since 2009 from a dozen Republican committee members urging DOE to approve grants and loan guarantees for clean energy start-ups in their districts.

“Risk is an inherent component of the loan guarantee program,” Waxman said. The program, he pointed out, is designed to help new technologies get off the ground, noting that China, the world’s largest solar panel maker, invested $30 billion in loans to solar manufacturers just last year.

With no witness testimony, the hearing lasted a little more than an hour, with Solyndra officials invoking their Fifth Amendment rights some 20 times, mostly in response to rhetorical questions posed by panel Republicans. As the subcommittee wrapped up its second round of questions, Waxman accused Republicans of “badgering” the witnesses and seeking “sound bites.”

It was “unseemly and inappropriate for members to ask questions we know the witnesses will not answer,” Waxman continued. With that, Stearns called the hearing to a close. However, this hearing is unlikely to bring this issue to a close in this partisan Congress.

Created through the 2005 Energy Policy Act to support clean energy investments, the loan guarantee program stood idle until March 2009. Solyndra was one of the first applicants in 2006. No loans were granted under the George W. Bush Administration, but Chu announced Solyndra’s approval two months after taking the helm at DOE in 2009. Since then it has offered $30 billion in loan guarantees for 41 projects, about half of which are solar related.

The program does not provide loans. It backs risky but potentially game-changing technologies by providing loan guarantees to cover portions of funds put up by private investors. If the companies do not fail, the program costs the taxpayer nothing. About 10% of the total value of the loan portfolio is actually set aside by congressional appropriators to cover failed projects, explains Michael S. Carr, Senate Energy & Natural Resources Committee senior counsel.

Praised at the time by Obama and Chu, the Solyndra loan relied on support from Obama’s then-new economic stimulus package, the American Recovery & Reinvestment Act of 2009. Internal e-mails and other documents, however, raise questions about DOE’s vetting and whether Obama’s and Chu’s zeal may have led to the default. Also, some in Congress have leveled charges of Administration bias because an Obama campaign contributor also invested in the failed solar manufacturer.

But in passing the 2005 act that set up the loan program, Congress’ focus was on gaining private, nongovernment investments for new, risky clean energy technologies, particularly nuclear technologies, Carr explains.

“This wasn’t something that Congress didn’t go into with their eyes wide open,” Carr says. “It is one of several loan-related programs offered in the funding authorizations, and in each case, money is set aside for losses. That is the idea and the law is very explicit. The Congressional Budget Office did an assessment and said a certain percent of this amount of money offered in loans is likely to be lost and it will cost the taxpayer X percent.”

“I am sorry, but there are losses,” Carr says. “It is possible, of course, that better decisions could have been made. But we need to look ahead and see the impact of the overall loan guarantee portfolio and see what Congress actually bought with these guarantees, rather than judge the overall program by assessing one particular project.”

Solyndra designed, developed, and manufactured tubular solar modules that were easy to install on rooftops and used little polysilicon, which was then in short supply. This design appeared to hold great promise in 2006, when the company applied for a loan guarantee. But the problem was price: The panels were far more expensive than conventional flat ones.

Over time, the polysilicon shortage disappeared and solar panel prices plummeted—a 42% drop in this year alone, according to DOE and industry figures. Solyndra could no longer compete and was forced to file for bankruptcy.

“Some projects work and some don’t,” notes Dan W. Reicher, executive director of Stanford University’s Steyer-Taylor Center for Energy Policy & Finance. Reicher is also a former energy investment adviser for Google and a former DOE assistant secretary. “You can’t indict 40-plus companies on a single company’s failed business plan. Solyndra bet on one set of factors that didn’t occur. That happens often with new technologies.”

Clean energy investors familiar with the DOE loan review process point out that the agency is careful when selecting which companies to support—maybe too careful. One such investor is Neil Z. Auerbach, managing partner of Hudson Clean Energy, a global private equity firm that manages more than $1 billion in assets. Auerbach has been on the receiving end of DOE loan guarantee reviews for several companies Hudson has financed.

“DOE’s was probably the toughest due diligence process we ever experienced,” Auerbach says. He explains that DOE is risk-averse and requires applicants to supply reams of material to lower risk. “We saw that as a problem,” he notes, adding that “in some cases, we decided to go elsewhere” to find support.

Echoing that view is Ed Feo, a managing partner at USRG Renewable Finance.

“In our experience, DOE’s loan guarantee office was well organized and operated like any financial institution. But the difference is the number of people and detail that is far beyond the commercial sector,” Feo explains. “From a government policy perspective, that is probably a good thing, but from the perspective of whether we enjoyed the experience, it was sometimes not so good.”

Several companies have announced they are reexamining their applications to the loan program because of delays driven by DOE scrutiny since the congressional investigation began.

Last week, however, DOE announced it could not process the loan by the end of September, the close of the fiscal year when stimulus funding expires. DOE blamed the time needed for increased documentation. In a Sept. 23 letter to Upton, SolarCity CEO Lyndon Rive asked the committee to pass legislation extending the statutory deadline.

The infighting disturbs Feo: “There is need for both private investments and government support when investments are too risky and more funding is needed to bring companies to commercialization. This isn’t just a concern for today. I don’t want to see a world where your kids are going to be flipping burgers at McDonald’s and buying solar panels from China.” ◾