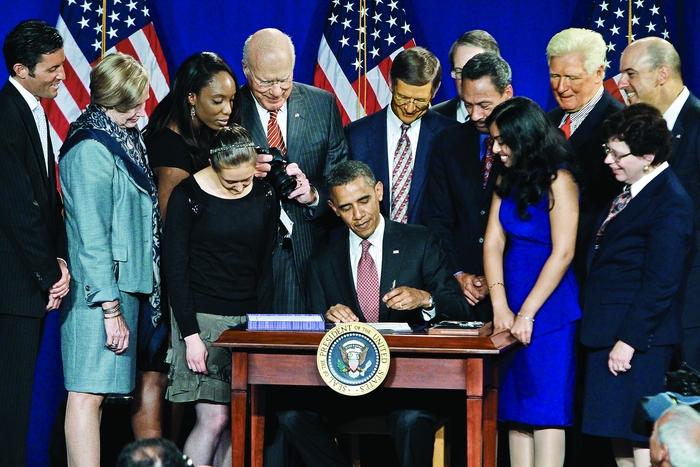 Credit: AP Photo/Jacquelyn Martin
Obama signs a bill into law that aims, in part, to help the patent office reduce its massive backlog of patent applications.

A recently enacted law that significantly overhauls the nation’s patent system for the first time since the Harry S. Truman Administration will help entrepreneurs and businesses bring their inventions and new products to market sooner, spur job growth, and make the U.S. more competitive globally, according to the White House and industry leaders. But critics of the new statute claim it will not promote innovation or create jobs and is essentially a sellout to large corporations that have intellectual property departments staffed with fleets of patent lawyers.

After nearly a decade of often contentious debate among patent policy stakeholders, the Leahy-Smith America Invents Act (H.R. 1249) was signed into law by President Barack Obama on Sept. 16 at Thomas Jefferson High School for Science & Technology, in Alexandria, Va.

The bill passed with strong bipartisan votes, clearing the Senate by an 89-9 margin last month and the House of Representatives by a 304-117 margin in June. The legislation substantially changes a patent system that was still largely based on the Patent Act of 1952.

“This much-needed reform will speed up the patent process so that innovators and entrepreneurs can turn a new invention into a business as quickly as possible,” Obama declared at the signing ceremony.

Citing one of the country’s most famous inventors as an example of why the patent law needed to be updated, he noted that when Thomas A. Edison received his patent for the phonograph in 1878, his application was approved in just seven weeks. “These days, that process is taking an average of three years,” Obama observed.

The new law, he added, will boost U.S. businesses, in part by giving the U.S. Patent & Trademark Office (PTO) the funding it needs to ease a massive backlog of more than 1.2 million applications currently filed and awaiting decision.

“Over the last decade, patent applications have nearly tripled, and because the patent office doesn’t have the resources to deal with all of them, right now there are about 700,000 applications that haven’t even been opened yet. Now, these are jobs and businesses of the future just waiting to be created,” Obama remarked. “Somewhere in that stack of applications could be the next technological breakthrough, the next miracle drug, the next idea that will launch the next Fortune 500 company.”

Commenting on the new law, Lechleiter said it will speed the commercialization of innovative discoveries and provide greater certainty for those who invest in bringing new products to market. “Lilly has championed efforts to modernize the patent system for many years, and we’re extremely pleased that the America Invents Act is now a reality,” he remarked. “Lilly supports any efforts to promote innovation at home and American competitiveness abroad, and with the passage of this bill and a clearer, more certain process, we can be sure that American inventors will keep inventing right here.”

The updated statute “brings the U.S. patent system into the 21st century,” Kullman said, noting that DuPont received its first patent in 1804 on a machine for granulating gunpowder. Since then, the company has received more than 37,000 patents.

“Patents have historically been an important tool in our efforts to deliver science that addresses global challenges such as food, energy, and protection,” Kullman said. “The America Invents Act will help DuPont more quickly convert our almost $2 billion-per-year investment in research and development into innovations we can bring to market with strong patent protection.”

Kappos said the new law will improve PTO’s funding model, which will help the office streamline its processes, cut into the backlog of applications, and ultimately shorten the time needed to obtain a patent.

Under the old system, Congress allocated PTO’s annual budget and also determined what fees it could charge applicants. Now, the patent office will be able to establish its own fee schedule and, with congressional oversight, keep all of the money it collects.

With additional resources and more budget autonomy, Kappos said he will be able to increase staffing and upgrade computers and other information technology at the agency’s offices. PTO currently employs about 9,500 people, including more than 6,000 examiners.

Plans call for hiring between 1,500 and 2,000 new patent examiners in the next fiscal year to help alleviate the application backlog. In addition, the office will hire up to 100 new administrative law judges to cut into a separate backlog of appeals. “It’s about turning American ingenuity into American jobs,” Kappos remarked in a conference call with reporters on Sept. 15.

A key part of the new law shifts the U.S. from its traditional first-to-invent system for granting patents to a first-inventor-to-file approach, a switch intended to avoid sometimes lengthy and expensive legal challenges and bring the country more in line with how other industrialized nations handle patents. Rather than requiring patent examiners to determine who was first to come up with an idea or produce an invention, the new system will reward the inventor who files the first application.

Opponents of the first-inventor-to-file system fear it will favor large multinational companies over small businesses, start-up entrepreneurs, and individual inventors who often lack the financial resources or know-how to quickly navigate the patent process.

“It’s not difficult to see who will benefit with this reform,” said Alec Schibanoff, executive director of American Innovators for Patent Reform, a coalition of inventors, patent owners, and technical professionals that lobbied against the legislation.

“Large corporations with their armies of in-house lawyers and deep pockets will get a head start on the race to the patent office, and small companies, universities, and independent inventors will be put at a distinct disadvantage,” he asserted. “This will not be a fair race.”

Critics also note that under the first-to-invent system, inventors had a one-year grace period to file for a patent—giving them up to a year to raise capital, assemble partnerships, and perform field tests before filing an application. Under the new law, the grace period is limited to public disclosures made by the inventor. But if the invention is described in a publication, the inventor gives up all foreign patent rights.

As a result, small-business advocates charge, the first-inventor-to-file system effectively eliminates the American grace period and forces small firms—if they can afford it—to file applications early and often as their inventive ideas mature and improvements are made.

“This legislation will irreversibly damage the ability of small-business owners and entrepreneurs to create, develop, and commercialize their innovations,” said Todd McCracken, president of the 150,000-member National Small Business Association. “To think this bill will have anything but negative implications on job creation is absurd.”